Russian TV journalist Marina Ovsyannikova who became famous for staging an on-air protest against Russia’s war in Ukraine has been put on Moscow’s wanted list after allegedly escaping from pre-trial house arrest.

Ovsyannikova, 44, was put under house arrest in August and faces up to 10 years in prison if found guilty of spreading fake news about Russia’s armed forces under a law introduced earlier this year.

The case relates to a protest in July when she stood on a river embankment opposite the Kremlin and held up a poster calling President Vladimir Putin a murderer and his soldiers fascists.

But state-run news outlet RT reported this weekend that she had somehow fled her accommodation with her young daughter in tow, and their current whereabouts are unknown.

‘Last night, my ex-wife left the place that the court assigned her for house arrest and, together with my 11-year-old daughter, fled in an unknown direction,’ her ex-husband was quoted as saying by RT – a Russian media company for whom he is a prominent producer.

Ovsyannikova, who was born in Ukraine, came to international prominence in March by walking out in front of studio cameras during an evening news broadcast on the flagship Channel One with a placard that read: ‘NO WAR. STOP THE WAR. DO NOT BELIEVE THE PROPAGANDA. THEY’RE LYING TO YOU HERE. RUSSIANS AGAINST WAR.’ 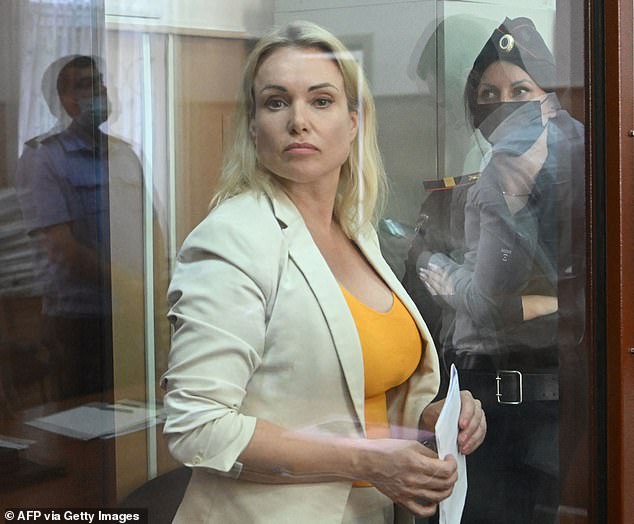 In this file photo taken on August 11, 2022 Marina Ovsyannikova, a journalist who became known internationally after protesting against the Russian military action in Ukraine during a prime-time news broadcast on state television, stands inside a defendants’ box during a court session over charges of ‘discrediting’ the Russian army, in Moscow. 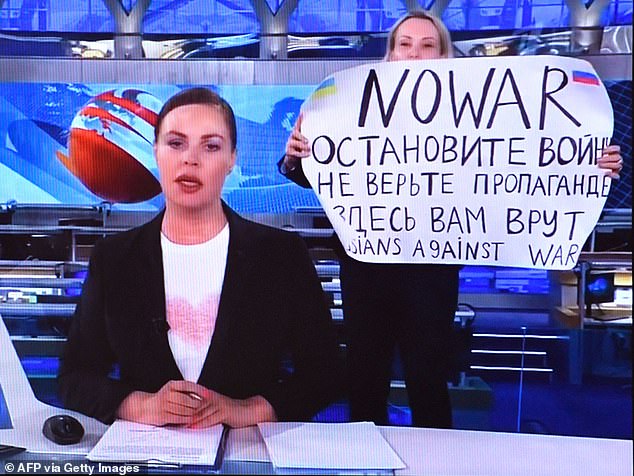 Ovsyannikova stormed a live TV broadcast to denounce the war in Ukraine, just 10 days after a law was passed which made ‘dissemination of false information about Russian armed forces’ an offence punishable by a decade or more of prison 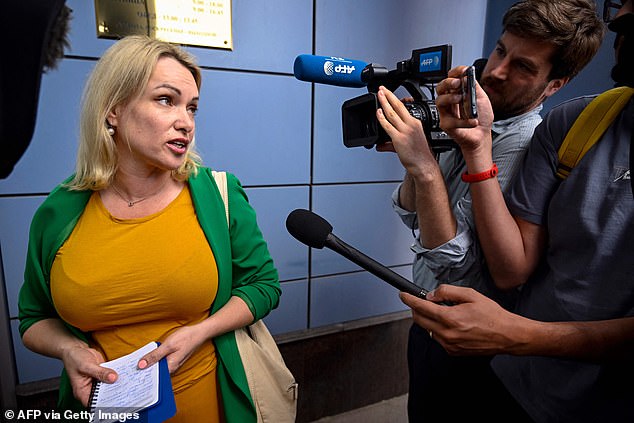 Ovsyannikova appears in court accused of ‘discrediting’ the Russian army fighting in Ukraine over her remarks outside a Moscow court earlier this month in support of opposition activist Ilya Yashin, in Moscow on July 28, 2022

Ovsyannikova’s name was today added to the Russian interior ministry’s online list of fugitives from justice.

Russia passed a law against discrediting the armed forces and the spreading of ‘false information’ on March 4, eight days after invading Ukraine.

Article 207.3 of the law states that ‘public dissemination of deliberately false information about the use of the armed forces of the Russian Federation’ is punishable by fines and prison sentences of up to three, five, 10 or 15 years, depending on the circumstances and on whether the offence had ‘serious consequences’.

Ten days after the law was passed, Ovsyannikova – a prominent Russian journalist and television producer who had for years worked for the flagship state-owned Channel One – leapt into view during a live broadcast and brandished a sign decrying the war in Ukraine.

There were fears the journalist would face harsh punishment immediately after the now infamous protest, but she was spared jail time and was instead hit with a meagre £210 fine.

However, the journalist refused to remain quiet and set about staging further protests in spite of the government’s crack down on anti-war activists.

In July, she demonstrated alone near the Kremlin holding a placard which criticised the war in Ukraine and labelled the warmongering Russian president a ‘killer’, and was also detained after voicing her support for jailed Russian opposition figure Ilya Yashin.

She was fined the equivalent of hundreds of pounds for each perceived breach of the Kremlin’s new law, and in August a judge saw it fit to have her placed under house arrest pending a wider trial.

Yet images posted to the journalist’s official Facebook account in September showed her sat in a courtroom, having doodled a sign which read ‘no to mobilisation’.

‘I, like millions of mothers in Russia, did not give birth to my son for him to go to war. All human life is precious. We gave birth to our sons to make scientific discoveries, fly to the stars, design new cities, build houses and bridges,’ the social media post read.

‘Not as cannon fodder for this criminal war.’ 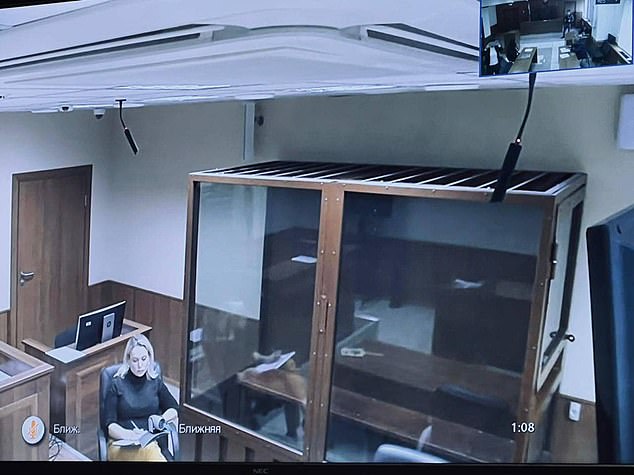 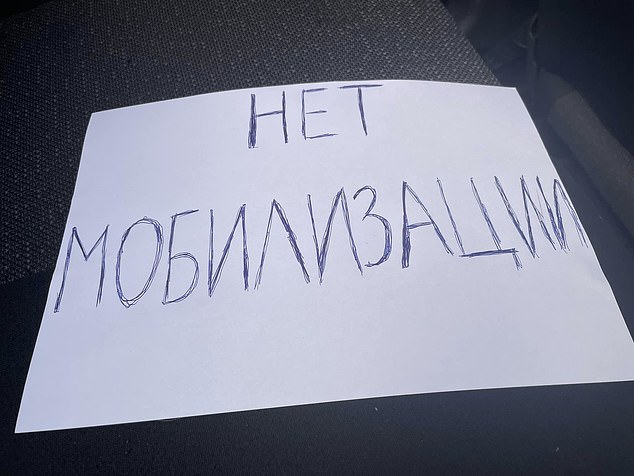 Images posted to the journalist’s official Facebook account in September showed what appeared to be a still from security footage of her in a courtroom, having doodled a sign which read ‘no to mobilisation’

Ovsyannikova was offered asylum by France earlier this year but rejected the prospect, stating in June that she wanted to return to Russia in order to fight for custody of her two children

In the weeks following her original protest in March, the journalist was offered jobs by a number of prominent European media companies and briefly worked with German outlet Die Welt.

She was also offered asylum by France but rejected the prospect, stating she wanted to return to Russia in order to fight for custody of her two children.

‘My son told me I’ve destroyed my family life… the consequences of my protest are snowballing every day,’ she said in June, before adding she thinks her former partner Ivan – also a state television employee – may be acting under pressure from the Kremlin.

‘I’m in limbo. I live day by day… I built a wonderful house in Moscow that I was hoping to spend the rest of my life in,’ the producer said. ‘Now I’m a stranger in a stranger’s land.’

It is unclear how Ovsyannikova and her 11-year-old daughter escaped house arrest or where they may have fled.