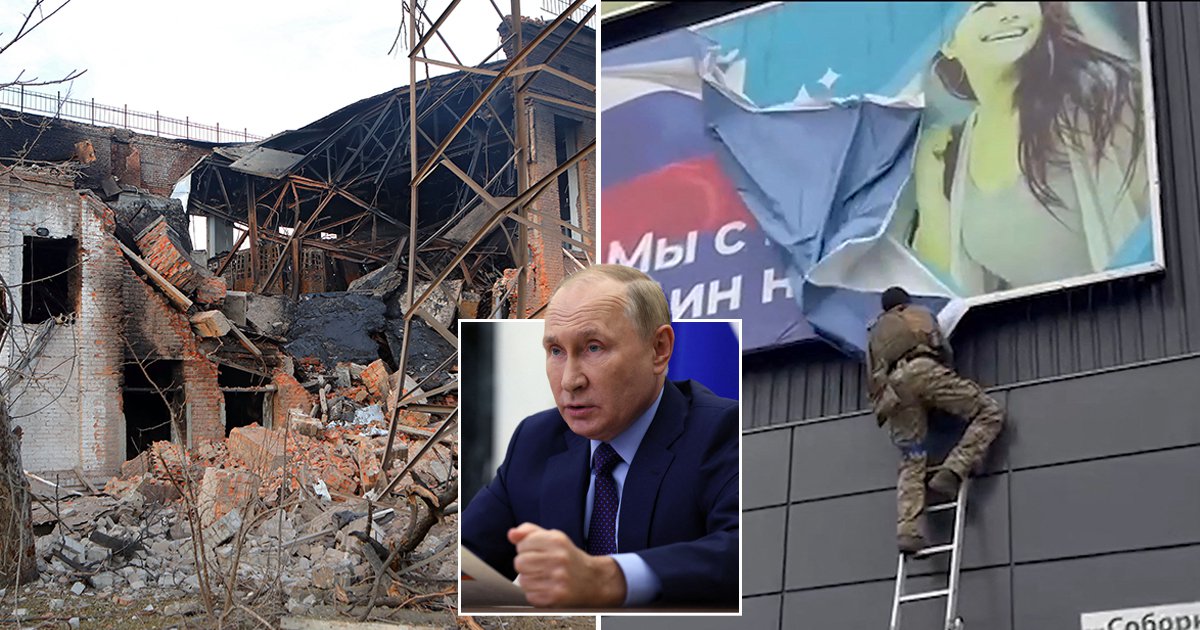 Russian forces continue to suffer more humiliating losses in Ukraine and are abandoning a key city in their droves as morale hits rock-bottom.

Melitopol is one of the largest cities in the southern Zaporizhzhia region, and its capture by Putin’s troops during the early days of the war was considered a major strategic victory.

Yet the city’s mayor Ivan Federov yesterday confirmed soldiers were retreating from the area and surrendering en masse as the Ukrainian Army liberates occupied territory at a staggering pace.

Since Moscow abandoned its main bastion in the northeastern region of Kharkiv on Saturday, Ukrainian troops have managed to recapture dozens of towns in a stunning shift of momentum.

Up to 150,000 people are believed to have been liberated from Russian rule last week as the ‘Kharkiv counteroffensive’ makes unprecedented gains.

Now Kremlin forces are currently said to be regrouping in Crimea after being banished from the mainland, with morale said to be so low among the invaders that Russia has stopped sending fresh units into the battlefield because volunteer soldiers are ‘categorically refusing’ to fight.

A Ukrainian general said: ‘The military command of the Russian federation has suspended the sending of new, already formed units into the territory of Ukraine.

‘The current situation in the theatre of operations and distrust of the higher command forced a large number of volunteers to categorically refuse the prospect of service in combat conditions.

‘The situation worsens due to the general attitude toward their own wounded. In particular, in Russian hospitals, diagnoses and the nature of combat injuries are deliberately simplified and no time is given for rehabilitation in order to quickly return servicemen to the combat zone.’

Kyiv intelligence claims many Russian soldiers have laid down their arms following defeats in Kharkiv as they ‘understand the hopelessness of their situation’, whereas an advisor to President Zelenskyy said the military has captured so many Russian soldiers over the last several days that it is running out of space to house them.

Yet despite the almost total collapse of the Russian ground offensive, experts warn Putin still has one more ace up his sleeve to help turn the tide of the war – the deployment of nuclear weapons.

Speaking of a potentially devastating Russian revenge attack, former Nato deputy secretary general Rose Gottemoeller, said: ‘I fear that they will strike back now in really unpredictable ways and ways that may even involve weapons of mass destruction.’

She said the move would be designed to ‘strike terror not only into the hearts of the Ukrainians but also the global partners and allies’.

‘There is a direct threat of the use, under certain circumstances, of tactical nuclear weapons by the Russian armed forces,’ wrote Ukrainian commander in chief, Gen. Valery Zaluzhny in an article last week.

‘It is also impossible to completely rule out the possibility of the direct involvement of the world’s leading countries in a ‘limited’ nuclear conflict, in which the prospect of World War III is already directly visible.’

However, many Ukrainians nevertheless remain defiant despite the looming threat of nuclear annihilation, with citizens and soldiers alike no longer afraid of the Russian military.

One resident of Kharkiv, who referred to himself only as Serhii, said Putin ‘will strike so we don’t have water, electricity, to create more chaos and intimidate us.

‘But he will not succeed because we will survive, and Putin will soon croak!’