Mayor Sadiq Khan is offering a golden ticket for two to the Euro 2020 final at Wembley Stadium in an online draw for any Londoners who have signed up for their first dose of the Covid jab by Thursday.

People in the capital city will be able to enter by providing proof that they attended a walk-in appointment this week for their first jab, or that they have booked a slot to get their first vaccination.

One winner and their guest will get the chance to attend Sunday’s final in person – the first major international football final to take place at Wembley in 25 years.

Entrants who post on social media about having or booking the vaccine will be entered into the draw twice, with full details to be made available on Mr Khan’s social media on Wednesday morning. 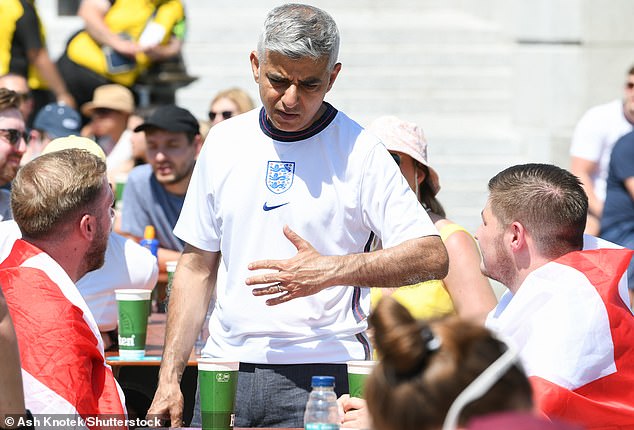 Mayor Sadiq Khan is offering a golden ticket for two to the Euro 2020 final at Wembley in an online draw for any Londoners who have signed up for their first dose of the Covid jab by Thursday (pictured: Mr Khan at Trafalgar Square Fan Zone on June 13) 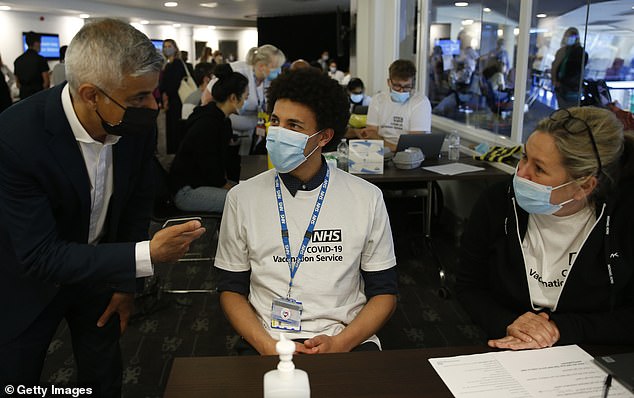 Entrants who post on social media about having or booking the vaccine will be entered into the draw twice. Pictured: the London Mayor speaking to NHS vaccination staff at Chelsea F.C. pop-up vaccine hub on June 19 in London

Mr Khan is also giving away 50 pairs of tickets to the Trafalgar Square Fan Zone to those who are due to get their first jab.

He called the ticket drive a ‘golden opportunity’.

The London Mayor said: ‘It’s really important we continue to boost the number of young people coming forward to be vaccinated.

‘To help encourage more people to book their life-saving jabs, we are offering Londoners a golden opportunity to watch the Euro 2020 final in the iconic Trafalgar Square Fan Zone – with one lucky Londoner and a guest invited to see the game at the home of English football, Wembley Stadium.

‘It could be an amazing day for our nation.’

He added: ‘We are already seeing the big difference that the vaccine is making in our fight against the virus, but the next two weeks are absolutely crucial in ensuring restrictions are lifted.

‘I urge all Londoners to get both doses of the vaccine as soon as possible.

‘As a global city we are leading the way in the rollout of the vaccine, and we will continue to do all we can to improve access; from providing access to vaccine centres at convenient times for Londoners’ busy lives, as well as opening walk-in centres, for Londoners regardless of immigration status and GP registration.’ 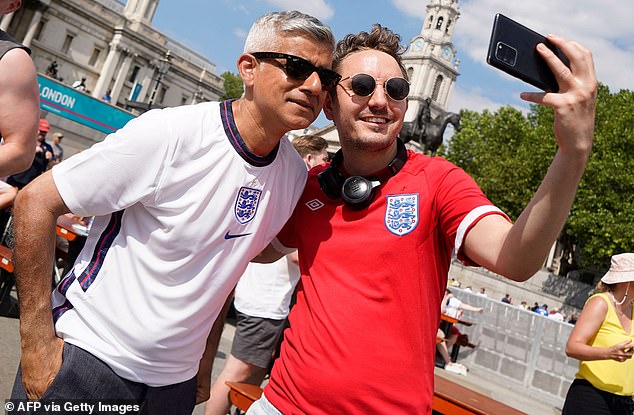 England are due to host the tournament’s semi-final and final at Wembley – with the latter taking place on Sunday July 11 at 8pm.

It follows Boris Johnson’s gamble on trusting the wall of immunity provided by vaccines and the judgment of the English public once legal restrictions are lifted – expected on July 19.

The Prime Minister acknowledged there may be 50,000 new cases a day by that point but insisted that if legal limits on gatherings and laws requiring the wearing of masks were not lifted this summer they may have to remain in place for another year.

Sajid Javid suggested cases could rise to more than 100,000 a day in the summer as restrictions are eased.

The Health Secretary told BBC Radio 4’s Today: ‘But what matters more than anything is hospitalisation and death numbers, and that is where the link has been severely weakened.’