Sale of paracetamol under scrutiny amid concern about overdoses in teens

The national medicines regulator will consider restricting the sale of paracetamol after an independent expert report raised concern about overdoses in teenagers.

In a statement, the Therapeutic Goods Administration said it would begin a consultation process regarding recommendations in the report, which included purchase limits of one or two packs per person and restricting sale without a prescription to over 18s. 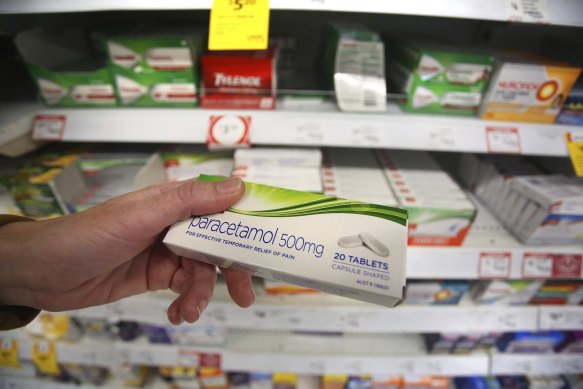 A customer inspects a box of Paracetamol tablets at a supermarket in Sydney. Credit:James Alcock

Last year, 3575 cases of intentional paracetamol poisoning were reported to the NSW Poisons Information Centre, which handles half of the nation’s poisoning calls. A University of Sydney study found rising rates of poisoning among young people reported to the centre and its Victorian counterpart, with a 98 per cent increase between 2006 and 2016.

Professor Nicholas Buckley, who led that research as well as the independent review, said a 50 per cent increase in incidents had been observed in the five years since.

“People haven’t been paying enough attention to what has been happening in adolescent self-poisoning,” said Buckley, who is also a consultant at the NSW Poisons Information Centre, noting the trend was being seen abroad.

Symptoms of paracetamol overdose include drowsiness, abdominal pain and vomiting. A more severe overdose, either due to the quantity taken or delayed treatment, can lead to liver failure and death.

While hospitalisation and death rates have not increased in recent years, “there is a concerning increase of misuse in the community”, the regulator said in a statement.

In their review of available evidence, the panel found paracetamol overdoses, particularly intentional poisonings, were two to three times more common in females than males. They found a “notable” increase in poisonings among teenage girls in 2019 to 2021.

The panel made four recommendations on the selling of paracetamol: a reduction in the size of packs sold in supermarkets and convenience stores without a prescription, or in pharmacies without the advice of a pharmacist; a limit of one or two packs per transaction to reduce home stockpiles; making modified-release paracetamol (a stronger dose designed for long-term use) prescription only; and restricting purchase without a prescription to people aged 18 and over.

It also recommended improving communication around the potential harms from paracetamol, maintaining and expanding follow-up care after self-harm and increasing awareness about safer storage and reducing stockpiling of medicines.

Previous University of Sydney analyses of data from the information centre has found overdoses in children are more likely to occur on school days, and the average age of an overdose is decreasing.

“But there is little evidence showing why this is happening, and why children are doing it younger and younger,” Buckley said, adding that, in addition to the recommendations, the panel also wanted more investment in research on the topic.

“Deliberate self-harm is a harder thing to stop, but stopping harm from paracetamol, specifically, is easier.”

Scientia Professor Helen Christensen, a Black Dog Institute board member and a member of the independent panel, said the review confirmed what services had been observing for the past decade.

“Paracetamol is available in the home, it is accessible, and the evidence suggests that this self-harm is an impulsive act,” she said.

“Reducing access to means is one of the best tools we have to reduce harm. We are very safe with medications around young children, or with elderly people who have confusion.”

The consultation on the recommendations is open until October 14. The Advisory Committee on Medicines Scheduling recommended the regulator consult widely on options to make changes to the Poisons Standard.

In 2018, the regulator moved to make low-dose codeine products a prescription-only medication, amid concern about codeine addiction and overdoses.

Crisis support is available from Lifeline on 13 11 14.