Salmond inquiry to publish evidence that could force Sturgeon to quit

Explosive evidence which could lead to Nicola Sturgeon’s resignation is to be published by the Alex Salmond inquiry.

The former SNP leader’s bombshell submission to the inquiry will accuse the First Minister of misleading parliament which, if true, could force her to quit.

The Holyrood committee is examining the Government’s botched probe into the handling of harassment complaints against Mr Salmond.

But he said he would not give evidence under oath unless his submission was published – and included in the inquiry’s final report.

There had been concerns it may contain information which would lead to the identification of one of his accusers.

But the decision yesterday to make Mr Salmond’s evidence public paves the way for a dramatic showdown in parliament next week, when he is now expected to appear. 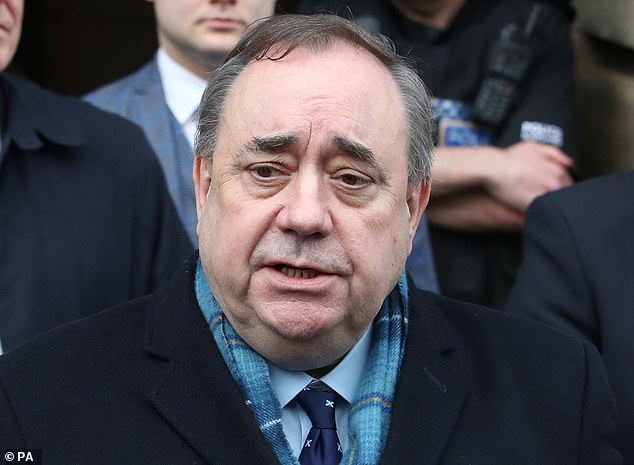 The former SNP leader’s bombshell submission to the inquiry will accuse the First Minister of misleading parliament which, if true, could force her to quit

The SNP reacted with fury to the decision last night. It accused the parliament of ‘jeopardising’ a court order to protect the anonymity of the women who had made allegations against Mr Salmond.

But Scottish Tory Holyrood group leader Ruth Davidson said: ‘Their clear overreaction only confirms in people’s minds that they must have something to hide.

‘Nobody is suggesting for a second that information would ever be published jeopardising a complainant’s anonymity. That would be totally unacceptable.

‘As the ruling party, it is the SNP’s own Government who so badly let down women who came forward. It is therefore galling to hear them falsely accuse others of doing the same.’

The Scottish parliament’s ruling body yesterday agreed that former First Minister Mr Salmond’s document can be made public following a row between MSPs on the inquiry committee.

It had voted not to publish the evidence amid fears it could breach a court order. But after asking the Scottish Parliament Corporate Body (SPCB) for a final decision, a resubmitted version of the evidence will be published early next week.

The move is likely to see Mr Salmond appear before the inquiry on Wednesday.

It is expected he will make serious allegations under oath against Miss Sturgeon, senior officials and the Crown Office.

After two meetings yesterday the SPCB’s chairman, presiding officer Ken Macintosh, said the group had ‘collectively agreed that on balance it is possible to publish the submission’ with some redactions. Publication by the parliament means the evidence can be included in the inquiry’s final report on the affair – and for questioning witnesses.

Opposition MSPs have welcomed the move following concerns that SNP members on the committee had not wanted Mr Salmond to attend over fears it could damage Miss Sturgeon.

The Holyrood inquiry is examining the Scottish Government’s probe into two harassment complaints against Mr Salmond in 2018. A judicial review ruled the investigation had been unlawful and ‘tainted by apparent bias’.

Mr Salmond was awarded more than £512,000 in taxpayer cash for his legal fees. He and Miss Sturgeon are the only two witnesses left to appear before MSPs over the affair, with the First Minister due to be the last to give evidence. 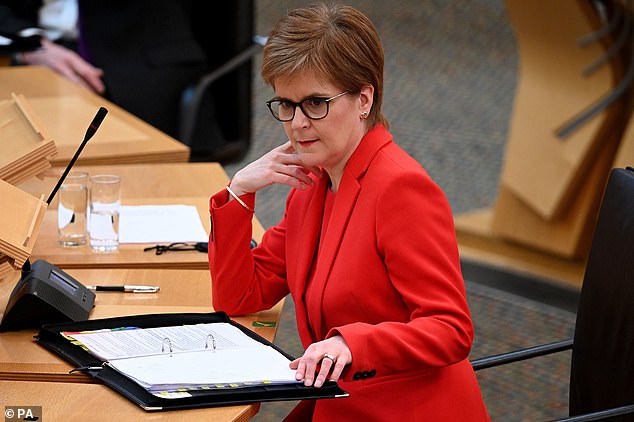 It is expected Mr Salmond will make serious allegations under oath against Miss Sturgeon, senior officials and the Crown Office

Mr Salmond made a submission to James Hamilton, QC, who is investigating whether Miss Sturgeon breached the ministerial code over the affair.

In the document, he accuses his successor of repeatedly misleading Holyrood in relation to meetings they held about the probe in 2018 and when she found out about the official complaints. If found to have breached the ministerial code, Miss Sturgeon could be expected to resign.

The evidence was also sent to the Holyrood inquiry as part of their probe – but they had refused to publish it over legal fears relating to a court order put in place during Mr Salmond’s trial in March last year.

He was acquitted on all 13 charges of sexual assault, including attempted rape.

Last week, the Spectator magazine went to court to seek clarity on the court order, with an amendment published by judge Lady Dorrian. However, the committee voted by five votes to four against publishing the submission.

Mr Salmond’s lawyers therefore submitted a revised version of the evidence to put the legality ‘beyond doubt’. This is the version addressed by the SPCB yesterday and which will now be published.

Last night, Mr Macintosh wrote to inquiry convener Linda Fabiani, saying: ‘Following two meetings of the SPCB today, at which a range of opinions were aired, the SPCB collectively agreed that on balance it is possible to publish the submissions by Alex Salmond on the ministerial code.’

Scottish Labour’s interim leader Jackie Baillie said: ‘This decision is most welcome and should pave the way for Mr Salmond appearing before the committee next week.’

But Nationalist MSP George Adam said: ‘People across Scotland will be utterly bewildered that the corporate body of the national parliament has ignored clear legal advice and decided to publish information which it knows could jeopardise the court-ordered anonymity of complainants in a sexual offence case.’

A Scottish parliament spokesman said: ‘The committee will be writing to Mr Salmond to invite him to give evidence to the committee on February 24.’

A spokesman for Miss Sturgeon said: ‘The publication of this submission changes nothing as far as the First Minister is concerned, as she has always expected to be questioned on its contents.

‘The only frustration is that she has still not had the chance to rebut the claims and conspiracy stories that have been levelled at her – and has lost count of how many times she has agreed to appear before the committee, only for the date to be postponed.’