Blue Origin announced that 18-year-old Oliver Daemen of the Netherlands will be joining founder Jeff Bezos on the company’s first crewed spaceflight after the winner of a $US28 million ($37 million) auction postponed.

Blue Origin said on Thursday (Friday AEST) the auction winner, who has asked to remain anonymous, would fly “on a future mission due to scheduling conflicts.”

A company spokesman said Daemen, an incoming physics and innovation management student at Utrecht University in the Netherlands, had participated in the auction and “secured a seat on the second flight. We moved him up when this seat on the first flight became available.” 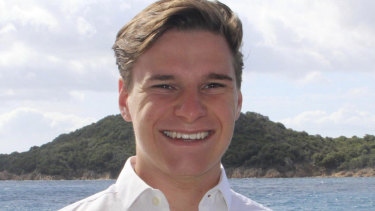 Oliver Daemen is the son of the founder and chief executive of Somerset Capital Partners, which invests in real estate, private equity and financial markets.Credit:AP

The company would not say how much Daemen bid. His father is Joes Daemen, the founder and chief executive of Somerset Capital Partners, which invests in real estate, private equity and financial markets.

The flight is scheduled for Tuesday from the company’s launch site in West Texas.

Daemen will travel with Bezos (who also founded Amazon and owns The Washington Post), his brother Mark Bezos and Wally Funk, an 82-year-old aviator and member of the Mercury 13 – a group of women who had been privately trained for NASA’s astronaut program at the height of the space race.

Though they were put through the same rigorous testing as the Mercury 7, the women, unlike the men, never got the chance to fly. 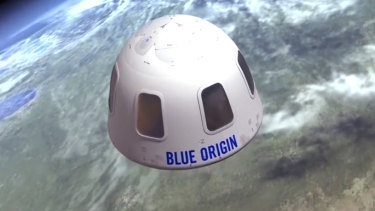 Daemen would become Blue Origin’s first paying customer and the youngest person ever to fly to space.

“At 18-years-old and 82-years-young, Oliver Daemen and Wally Funk represent the youngest and oldest astronauts to travel to space,” Blue Origin said in a statement.

Blue Origin described Daemen as a lifelong space enthusiast and said he took a gap year after graduating from high school in 2020 to obtain his private pilot’s license.

The $US28 million paid by the unnamed auction winner is extraordinarily high for a suborbital flight that lasts roughly 10 minutes and affords just three or four minutes in space.

Richard Branson’s Virgin Galactic had been charging $US250,000 for similar flights. And Houston-based Axiom Space has sold week-long trips to the International Space Station for $US55 million.

Blue Origin has said auction proceeds would go to its nonprofit, Club for the Future, which promotes careers in science, technology, math and engineering.

On Wednesday, it announced it was awarding $US1 million grants to 19 non-profits, including the National Space Society, Space Camp, the Planetary Society and Students for the Exploration and Development of Space, a college group that Bezos was part of while an undergraduate at Princeton University.

The flight is scheduled to coincide with the July 20 anniversary of the Apollo 11 moon landing in 1969. 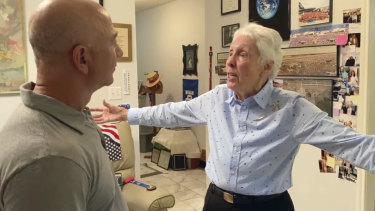 Jeff Bezos with Wally Funk, who at 82 will become the oldest person to launch into space.Credit:AP

“This marks the beginning of commercial operations for New Shepard, and Oliver represents a new generation of people who will help us build a road to space,” Bob Smith, Blue Origin’s CEO, said in a statement, referring to the rocket system that will carry the passengers.

New Shepard is named after Mercury astronaut Alan Shepard, who was the first American to go to space in 1961.