Schools in England have cancelled Christmas nativities and banned pupils from different year groups from mixing as schoolchildren are tested for the new Covid variant.

Surrey Council has told schools not to hold large gatherings which could lead to significant mixing of people from different households as festive plays are suspended for the second year running. Schools in Manchester took a similar approach last week by banning parents from attending nativities.

Ministers have ruled that schoolchildren should wear facemasks in ‘communal areas’ including hallways and said close contacts of those who test positive for the so-called ‘Omicron’ mutation – including children – must self-isolate for 10 days.

However, teaching unions are demanding that the Government go further by expanding facemasks to classrooms. The Association of School and College Leaders has even called on Ministers to encourage twice-weekly home Covid testing ‘in order to reduce the risk of transmission’.

Furious parents and MPs have argued that these restrictions will cause ‘chaos’ and further disrupt children’s education. Campaign group UsForThem, which fought to get schools reopened during the pandemic, warned that ‘forcing health children to isolate’ is an ‘unmitigated disasters’ and called plans to do so ‘unforgivable’.

Today another school imposed a ‘circuit breaker’ and sent its pupils home after just one Covid case was detected among its teachers. St Mary’s Primary School in Hertfordshire is closed today due to a ‘staff shortage’ and will remain shut until all staff are tested for the virus.

Three cases of the new ‘Omicron’ variant have been detected in England. One patient, in Essex, is said to be not seriously ill and isolating with family. But health chiefs are probing possible contacts they made at a local KFC and school, before knowing they were unwell. Pupils at the school are now being tested for the variant, and possible contacts made at the KFC in Brentwood are also being tracked down.

The apparent surge among children, combined with growing alarm over the spread of the new variant in England and Scotland, has prompted Ministers to tighten Covid measures. 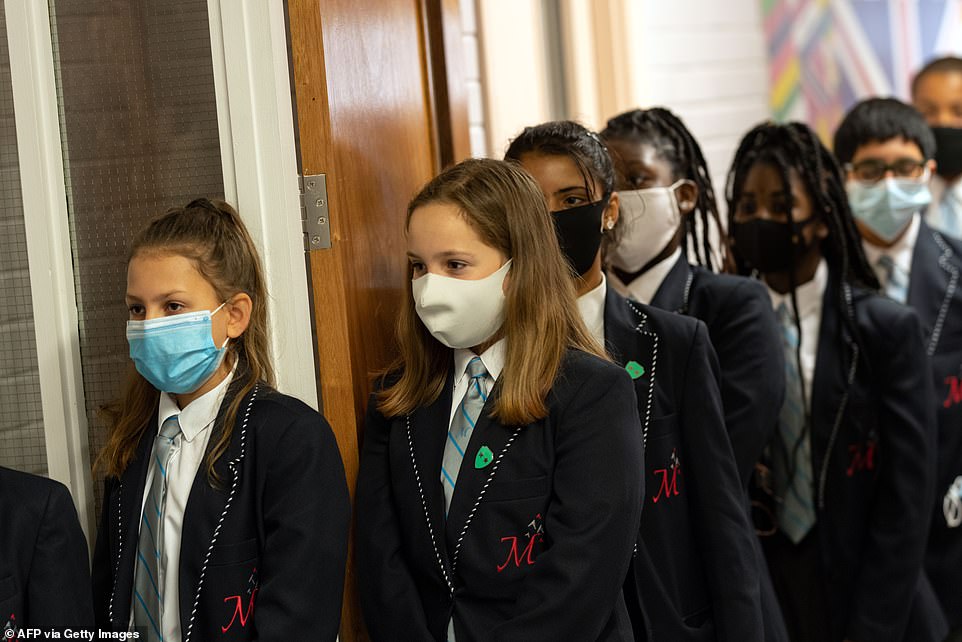 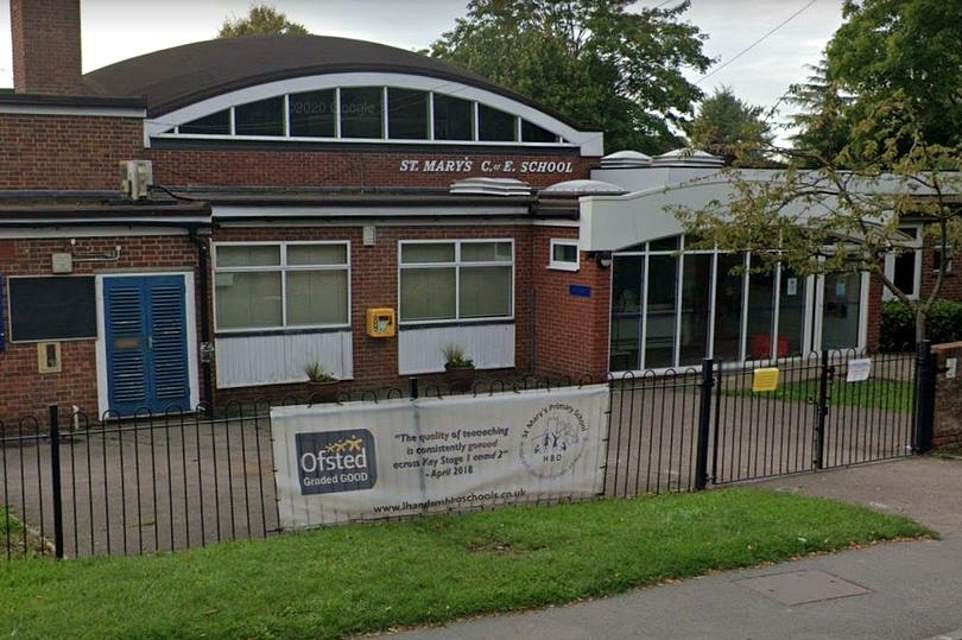 Today another school imposed a ‘circuit breaker’ and sent its pupils home after just one Covid case was detected among its teachers. St Mary’s Primary School in Hertfordshire is closed today due to a ‘staff shortage’ and will remain shut until all staff are tested for the virus 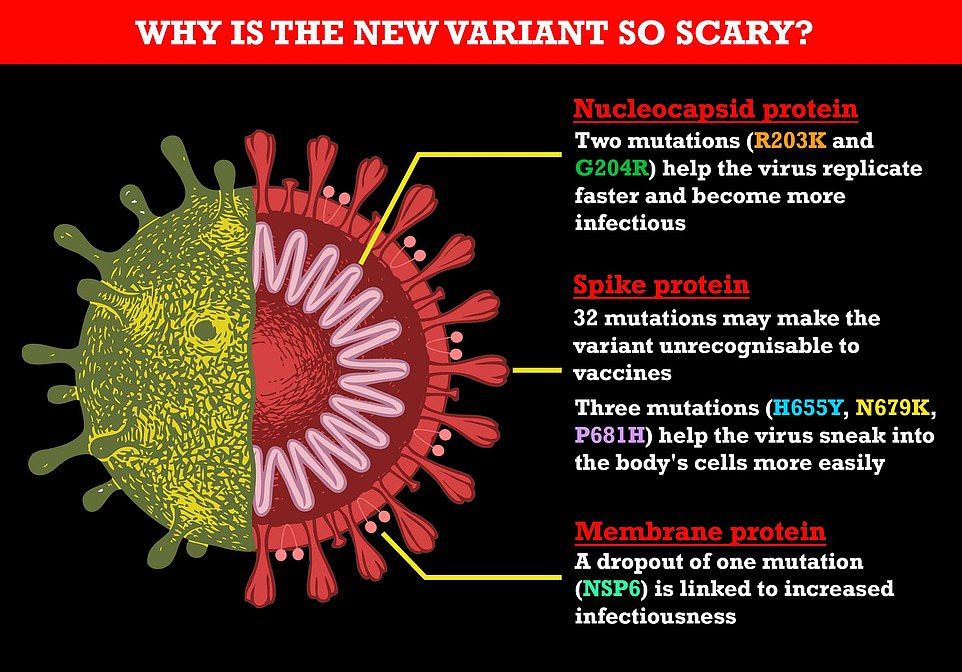 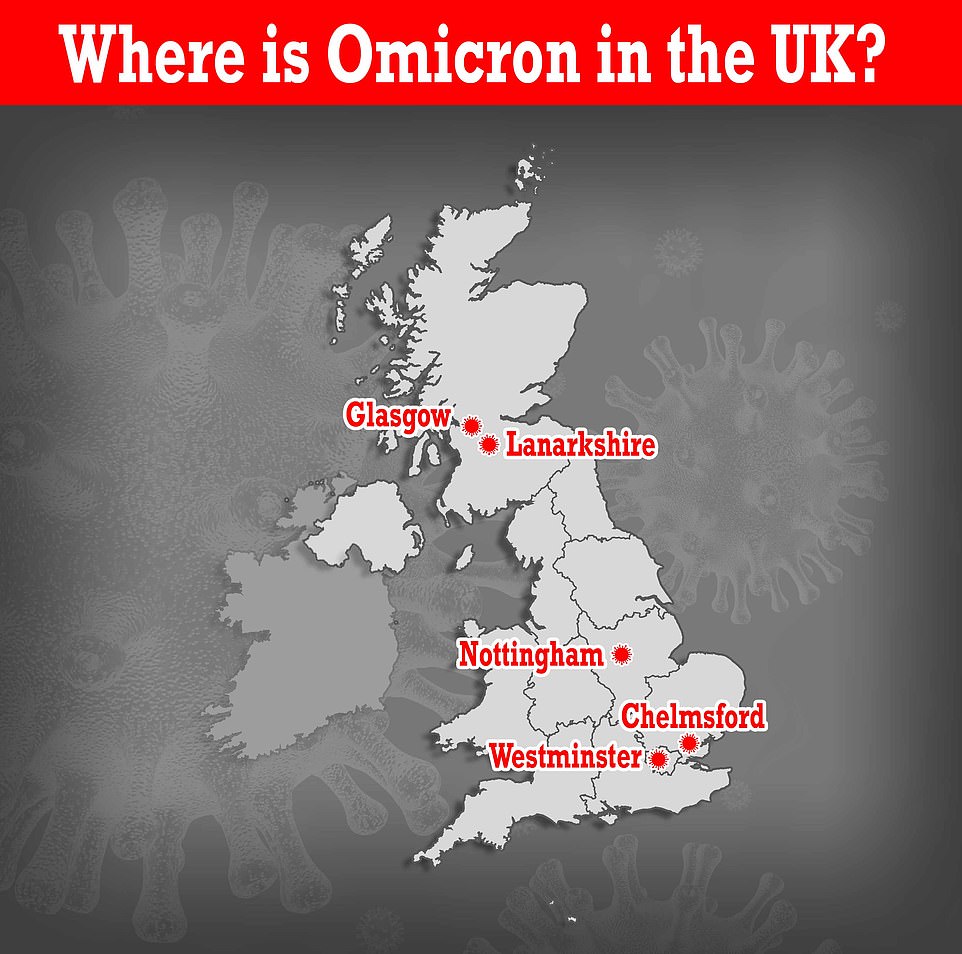 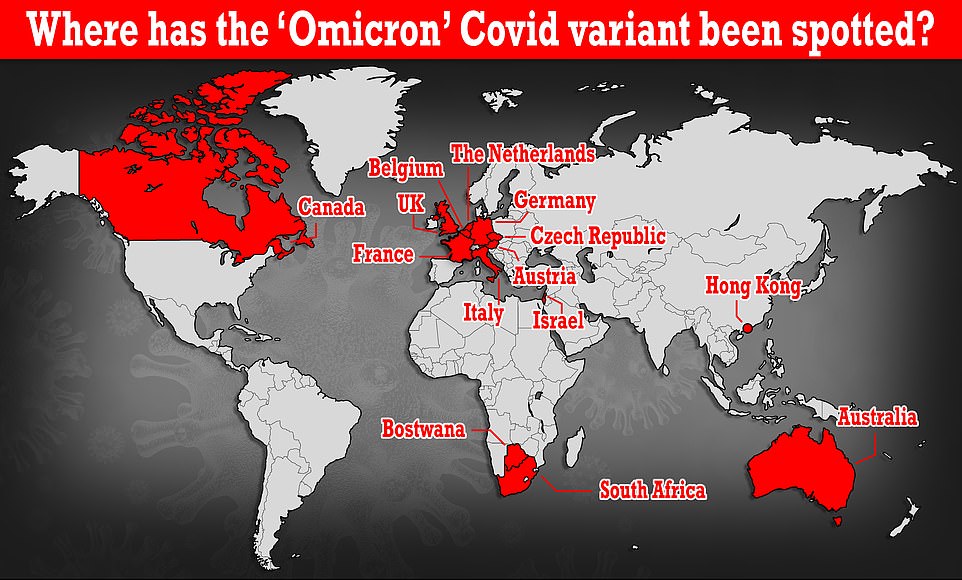 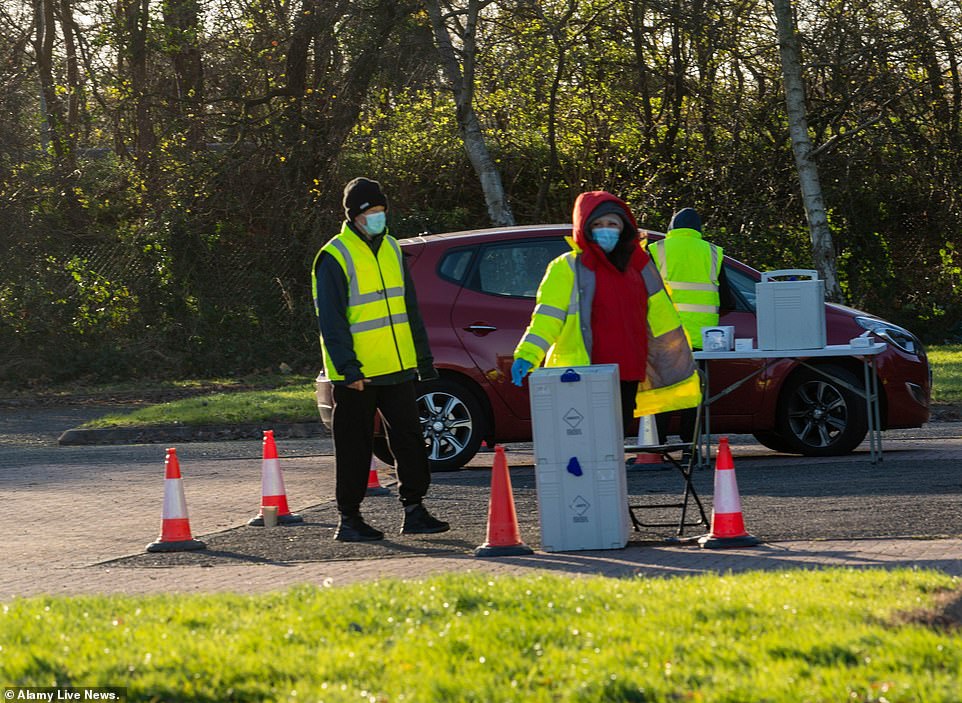 Some six Covid cases have bene detected in Scotland, taking the UK’s total infections to nine. The other three were detected in Brentwood, pictured, Westminster and Nottingham. Up to 225 ‘possible’ cases are also being investigated

Schools are facing the prospect of closing early for Christmas amid a surge in Covid cases.

Thousands of children around the country are being switched to remote learning as increasing numbers of staff and pupils test positive for the virus.

Oxford Academy is currently in the middle of what it calls a ‘circuit breaker’ for years seven, eight and nine with pupils being taught at home.

The school said it had done everything it could to find staff cover, but had reached the point where absence levels were too high.

In Buckinghamshire, Great Kimble Church of England School closed for two days last week due to staff absences. A further seven schools in the county were partially closed for some of last week.

At Outwood Academy Acklam, in Middlesbrough, year nine students have been taught remotely for three days because of Covid-related staff shortages, while at Ifield Community College, in Crawley, West Sussex, each year group spent one day learning from home.

Guidance from the Department for Education (DfE) says schools should only send large groups of children home in ‘extreme cases’ and as a ‘last resort’.

But furious parents and MPs have argued that these restrictions will cause ‘chaos’ and further disrupt children’s education. Campaign group UsForThem, which fought to get schools reopened during the pandemic, warned that ‘forcing health children to isolate’ is an ‘unmitigated disasters’ and called plans to do so ‘unforgivable’.

UsForThem co-founder Molly Kingsley urged Ministers to exempt children from the self-isolation rules, adding that if they don’t ‘it will cause chaos in the classrooms’.

‘Asking health children to quarantine is not a harm-free measure, it is harmful to children who are not at serious risk from the illness. At this point in the pandemic, it is shameful for the Government not to have an exemption for children.’

Tory backbencher Steve Baker, deputy chairman of the lockdown-sceptic Covid Recovery Group, said the Government ‘needs to explain when all of this will be brought to an end’.

And Sir Iain Duncan Smith, the former Conservative leader, added: ‘We have already seen a staggering number of children who have missed out on education. So we must absolutely be clear that there is no reason why children should not be in school.’

He said that the news rules compelling healthy children to self-isolate should be ‘looked at very carefully in light of the already existing massive problem for children missing education’.

The Department for Education sent an email update to schools and childcare providers which said: ‘Face coverings should be worn in communal areas in all settings by staff, visitors and pupils or students in Year 7 and above, unless they are exempt.

‘Pupils or students (in Year 7 or above) should continue to wear face coverings on public and dedicated school transport, unless they are exempt.’

The update comes after the UK Health and Security Agency (UKHSA) said an individual, who is longer in the country, tested positive for the Omicron variant after travelling to Westminster in London and the infection was ‘linked to travel to southern Africa’.

The Omicron variant is thought to be more transmissible than the currently-dominant Delta variant.

It was first identified in South Africa but has been found in Hong Kong, Belgium and the Netherlands in the days since the World Health Organisation designated it a ‘variant of concern’.

Education Secretary Nadhim Zahawi said: ‘The news of a new variant – the so-called Omicron variant – will have understandably caused concern for people across our country, including our teachers, wider education and childcare staff, parents, pupils and students.

‘We are already taking targeted and proportionate action as a precaution while we find out more information about the new variant.

‘We are working with education and childcare settings to enhance safety measures where needed, including introducing isolation for 10 days for close contacts of suspected Omicron cases. 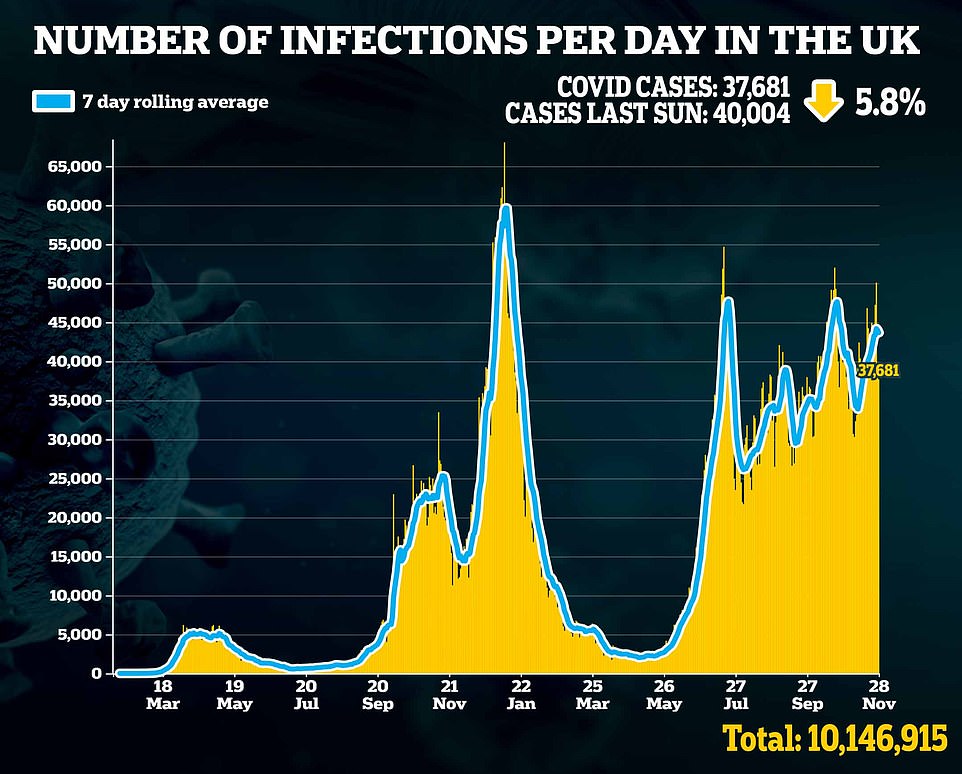 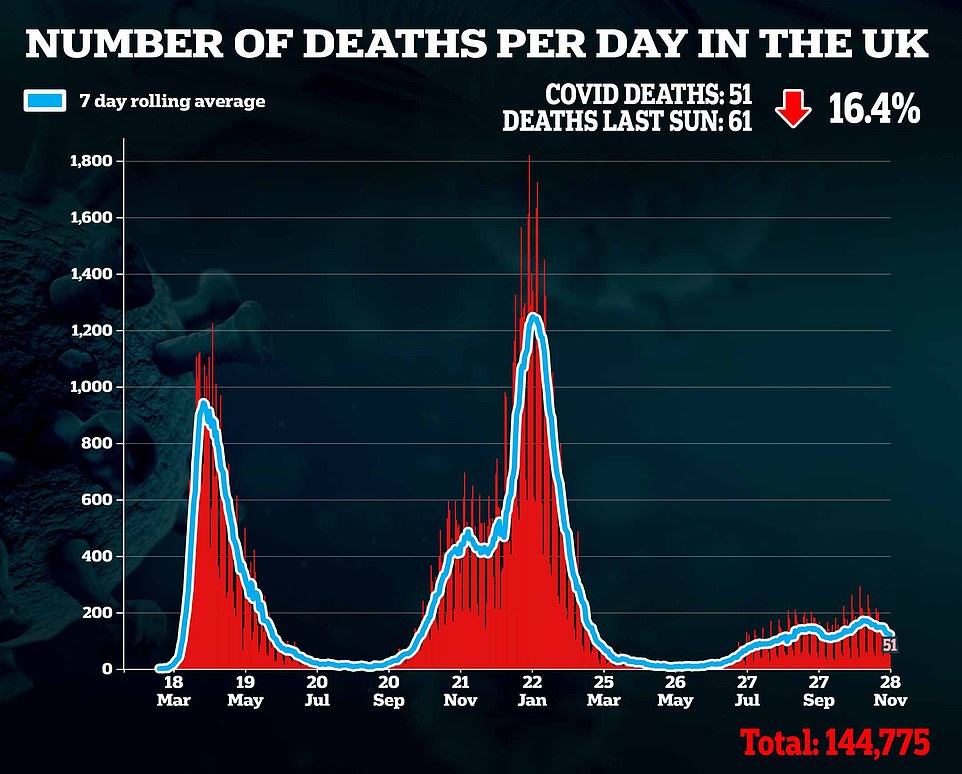 It comes after another 37,681 Covid cases and 51 deaths were recorded in the UK yesterday

Secondary schools must prepare to run on-site Covid testing when pupils return after the Christmas holidays, it was revealed.

The Department for Education (DfE) has emailed headteachers, telling them to conduct asymptomatic testing in early 2022.

The measure is designed to reduce transmission ‘after a period of social mixing’ over the festive break.

The DfE acknowledged it was a ‘significant ask’, giving schools less than three full working days to order the lateral flow testing kits they will need.

The Association of School and College Leaders (ASCL) attacked the lateness of the announcement, as well as the extra pressure it places on secondaries.

It accused the government of treating schools as ‘an ad hoc branch of the NHS’, by expecting them to ‘handle the logistics of staffing and setting up testing stations’.

The DfE email to schools said: ‘We would like all secondary schools to prepare to test their pupils once on-site on return in January.

‘We understand that this is a significant additional ask but testing continues to play a vital role in keeping Covid-19 out of schools.

‘Testing all pupils in school boosts testing participation and will help reduce transmission after a period of social mixing over the school holidays.

‘Tests, PPE and funding to support your workforce will be provided as before. After this test on return, pupils should continue to test in line with government guidelines.’

‘I’d like to thank everyone working to support our children and young people for their patience and hard work.’

The guidance is temporary and will be reviewed in three weeks, the Department for Education said.

Students in Year 7 or above should also continue to wear face coverings on public and dedicated school transport, unless they are exempt, the DfE said, and staff and students should continue to be encouraged to test themselves twice a week using lateral flow tests.

The department also said schools, out of school settings and colleges will ‘want to consider’ whether to go ahead with any planned international trips at the current time, given the potential risk to education from the need to isolate and test when returning to the UK.

Geoff Barton, general secretary of the Association of School and College Leaders, said it supports the measures ‘as a sensible response to the risks posed by the Omicron variant of Covid-19’.

But he added: ‘This worrying situation, however, emphasises the need for better support from the Government for the education sector.’

Kevin Courtney, joint general secretary of the National Education Union, said: ‘We welcome the DfE guidance that masks must be worn by adults and children in Year 7 and above in communal areas. We think the DfE should go further and encourage mask-wearing in secondary classrooms and also plan investment to improve ventilation and air filtration.

‘These steps can all help reduce the spread of Covid and thereby reduce disruption to education. Omicron makes the threat of disruption of education all the clearer: any close contacts of an Omicron case, staff or pupils, will have to self-isolate for 10 days, whether vaccinated or not.’

Dr Patrick Roach, general secretary of NASUWT – The Teachers’ Union, welcomed the guidance but added: ‘If schools are to maintain safety during the remainder of this term, the Government will need to accept that its messaging needs to be stronger and that the rules governing isolation of close contacts in particular need to be clear and robust.’

He said the Government needs to consider bolstering its advice to require close contacts to self-isolate if they have Covid-19 symptoms, adding: ‘In the event that there is a delay in a pupil getting a PCR test, or refusing to do so, there is a real risk that close contacts of the new Omicron variant will continue to attend schools for longer than is appropriate, potentially putting others at risk of contracting the new variant and of further transmission of the virus in schools and in the wider community.’

Dr Roach said ‘significant numbers of pupils’ do not undertake the recommended twice-weekly lateral flow tests and the Government ‘must identify a more effective strategy for Covid testing to ensure that all schools can continue to remain open safely’, while providing them with the resources to implement essential safety measures.

It comes after another 37,681 Covid cases and 51 deaths were recorded in the UK yesterday.

The number of infections posted by Department of Health officials today is down 5.8 per cent from 40,004 recorded last Sunday, while the number of people who have died within 28 days of testing positive for Covid fell by 16.4 per cent from 61 last week.

Case numbers have been steadily around 30,000-50,000 new cases a day in the UK since the summer with a relatively low number of daily deaths compared to previous waves of the pandemic.