A motor neurone disease researcher who has made significant strides toward understanding the disease, even as he fights it himself, has been named winner of the Eureka Prize for Scientific Research.

Professor Justin Yerbury was diagnosed with MND in 2016. It has left him entirely paralysed. He uses a ventilator to breathe and his scientific papers – at least 35 in the past three years – are written using an eye-tracking system. 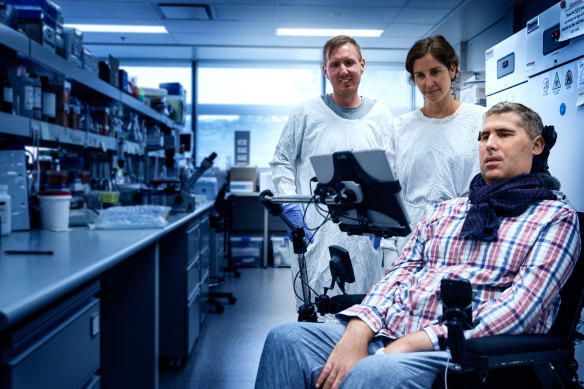 Professor Justin Yerbury at the University of Wollongong.

“There are over 2000 people living with MND in Australia today. The thing that unites us all is the hopelessness that an incurable disease brings. I want to change that,” Yerbury said.

“I want a better life for people with MND and I want to make MND a treatable disease. I am not going to stop until I can say that MND is something that is not a hopeless case.”

A faulty gene means the disease runs in Yerbury’s family. In a six-week period in 2002, he lost his mother, grandmother, and aunt to MND. His University of Wollongong lab has taken major steps forward in understanding the disease, and they are now testing several potential treatments.

“He’s basically the brains behind the operation. He just does not stop. The ideas keep coming and we help him carry them out,” said Natalie Farrawell, Yerbury’s senior research assistant.

“It’s a constant struggle. Working alongside him, you can see how hard it is for him, but he’s so determined to get his ideas out, to try to make a difference in the field.”

Motor neurons in the brain and spinal cord control our muscles. Their instructions let us walk, speak, swallow, even breathe. MND is characterised by their slow breakdown. As they die, they take these abilities one by one.

About nine out of 10 cases are not inherited – the disease simply appears. Most people with the most common form of MND will die within five years of diagnosis.

Yerbury’s work focuses on crucial brain proteins that, in people with MND, seem to go haywire.

Under the microscope, MND bears a lot of similarities with Alzheimer’s: scientists can see proteins clumping up to form unusual balls in neural tissue, but it’s not clear if this is a cause of the disease or a symptom.

Yerbury’s research hints at the former. His team has shown the protein machinery surrounding motor neurons is exquisitely fragile. If the machinery makes a small mistake or comes under a lot of stress – from environmental toxins or exposure to viruses – it can collapse, taking the neurons with it.

Yerbury’s lab is already testing compounds that might stop that collapse.

“This is important work,” said Professor Matthew Kiernan, co-director of the Brain and Mind Centre. “We have one medication for patients at the moment. And it just seems to slow the disease down. Nothing seems to stop it.”

Microfactories and the future of recycling

Professor Veena Sahajwalla was awarded the Eureka Prize for Promoting Understanding of Science, one of 14 gongs handed out by the Australian Museum at a ceremony in Sydney on Wednesday night. 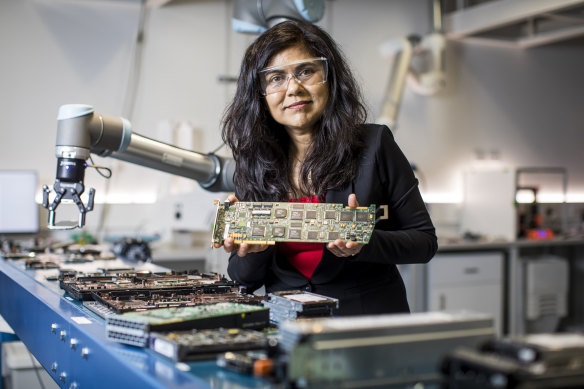 Sahajwalla, founding director of the centre for sustainable materials research and technology at the University of NSW, has pioneered research on ‘microfactories’ – small recycling labs that can be built inside manufacturing facilities. One company has already installed a lab to turn waste into ceramic tiles, while Sydney Olympic Park has contracted them to recycle its street banners.

Born in Mumbai, Sahajwalla moved to America to study and then to Australia for work.

Local markets were full of people recycling waste into usable goods. As Sahajwalla said: “What if you could inherently see waste as part of the supply chain?”