New York: A second former aide has come forward with sexual harassment allegations against New York Governor Andrew Cuomo, who responded with a statement saying he never made advances toward her and never intended to be inappropriate.

Charlotte Bennett, a health policy adviser in the Democratic governor’s administration until November, told The New York Times that Cuomo asked her inappropriate questions about her sex life, including whether she had ever had sex with older men. 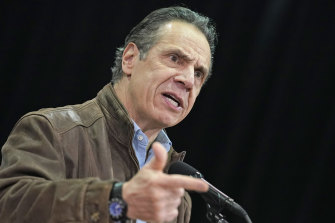 Another former aide, Lindsey Boylan, a former deputy secretary for economic development and special adviser to the governor, recently accused Cuomo of subjecting her to an unwanted kiss and inappropriate comments. Cuomo denied the allegations.

Cuomo said in a statement on Saturday that Bennett was a “hardworking and valued member of our team during COVID” and that “she has every right to speak out”.

He said he had intended to be a mentor for Bennett, who is 25.

“I never made advances toward Ms Bennett nor did I ever intend to act in any way that was inappropriate,” Cuomo’s statement said. “The last thing I would ever have wanted was to make her feel any of the things that are being reported.”

Cuomo, however, said he had authorised an outside review of Bennett’s allegations.

The governor’s special counsel, Beth Garvey, said that review would be conducted by a former federal judge, Barbara Jones.

“I ask all New Yorkers to await the findings of the review so that they know the facts before making any judgements,” Cuomo said. “I will have no further comment until the review has concluded.”

Bennett told the Times that her most disturbing interaction with Cuomo happened last June 5 when she was alone with him in his Albany office. She said Cuomo started asking her about her personal life, her thoughts on romantic relationships, including whether age was a factor, and said he was open to relationships with women in their 20s.

Bennett said she also dodged a question from Cuomo about hugging by saying she missed hugging her parents. She said Cuomo never touched her.

“I understood that the governor wanted to sleep with me, and felt horribly uncomfortable and scared,” Bennett told the Times. “And was wondering how I was going to get out of it and assumed it was the end of my job.”

Bennett said she informed Cuomo’s chief of staff, Jill DesRosiers, about the interaction less than a week later. She said she was transferred to another job on the opposite side of the Capitol. At the end of June, she said she also gave a statement to a special counsel for Cuomo.

Garvey acknowledged that the complaint had been made and that Bennett had been transferred as a result to a position in which she had already been interested.

Bennett told the newspaper she eventually decided not to push for any further action by the administration. She said she liked her new job and “wanted to move on”.

The allegations did not result in any action taken against Cuomo at the time.

Jones, who will oversee the investigation, was appointed to the bench by President Bill Clinton, a Democrat, in 1995. As a judge, she struck down a portion of the Defence of Marriage Act denying federal recognition of same-sex marriage in a ruling later upheld by the US Supreme Court.

After retiring, she joined the law firm Bracewell LLP, where her work focuses on corporate compliance and investigations.

Her arbitration work included a 2014 decision throwing out Ray Rice’s suspension by the NFL for punching his fiancé in an elevator in an attack recorded on video.

accuses, aide, G, New, second, York
You may also like: