Cuomo allegedly asked the woman assistant, whose identity remains anonymous, to take a selfie with him while they worked together at his office in the Executive Mansion in Albany on December 31, 2019.

As she held up the camera, Cuomo allegedly ‘moved his hand to grab her butt cheek and began to rub it’ for at least five seconds.

The assistant claims she was ‘was shaking so much during this interaction’ that the photos came out blurry — and Cuomo suggested the two sit down to take one more, the document says.

That photo, showing Cuomo smirking while he sits back on a couch with the aide, is included in the report.

The governor then allegedly told her to send the snap to another aide, Alyssa McGrath – who has also accused Cuomo of sexual harassment – and said ‘not to share the photograph with anyone else.’ 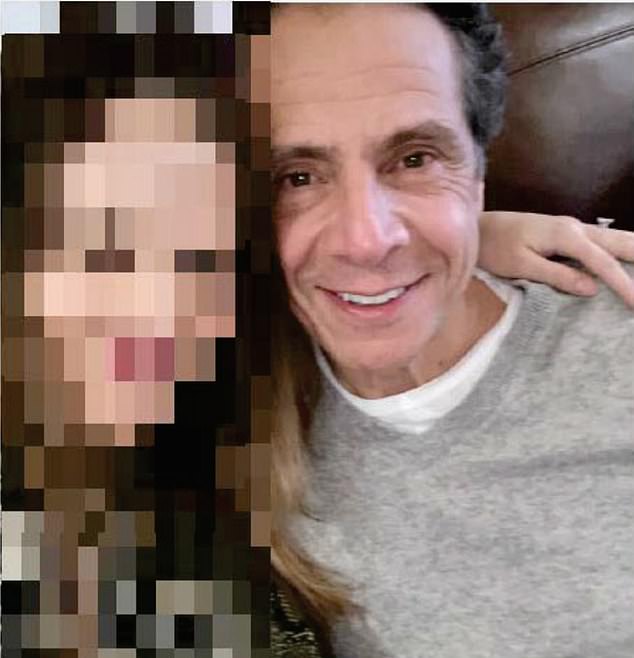 A selfie released in the official report into sexual harassment allegations against NY Gov. Andrew Cuomo (right) shows him smirking after he allegedly groped an assistant (left)

She notes that she didn’t report what happened because she was terrified Cuomo’s top aides would force her out.

‘[T]he way he was so firm with [me] that I couldn’t show anyone else that photo, I was just terrified that if I shared what was going on that it would somehow get around,’ she told investigators.

‘And if Stephanie Benton or Melissa [DeRosa] heard that, I was going to lose my job,’ she added. Benton and DeRosa are two of the governor’s top aides.

The unidentified staffer claims Cuomo asked him to forward the photo to another employee, believing he wanted to ‘make her jealous’. He also instructed her not to share the picture with anyone else.

That snap was released Tuesday as part of Attorney General Letitia James’ bombshell report into the sexual assault allegations made against the governor.

He release a pre-recorded statement furiously denying the women’s allegations, and refused to resign.

Cuomo’s own Democrat party – which controls both the New York State House of Representatives and Senate – have vowed to launch impeachment proceedings to try and get rid of him, with President Biden also calling for him to quit. 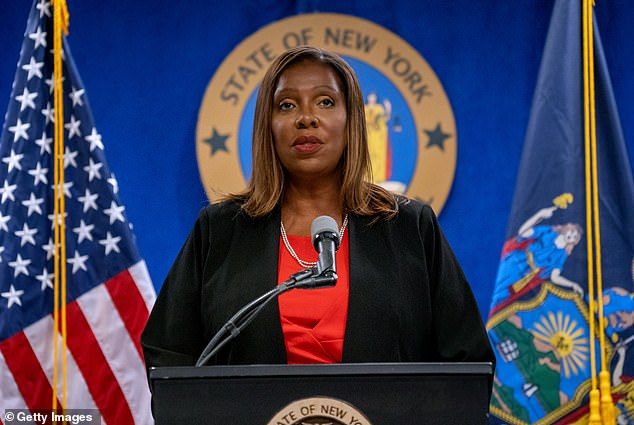 Cuomo admitted that he and the staffer took a photo together, but said it was her idea, because ‘he does not like to take selfies.’

The report also alleged that Cuomo routinely engaged in a pattern of impropriate conduct towards the same assistant, beginning back in late 2019.

The report says Cuomo repeatedly sexually harassed when she worked for him by subjecting her to ‘close and intimate hugs’, ‘kisses on the cheeks and forehead’, ‘at least one kiss on the lips’ and ‘touching her butt’.

He allegedly referred to her and one other assistant as ‘mingle mamas’ and asked her repeatedly if she would ever cheat on her husband.

In one instance outlined in the report, the assistant claims Cuomo groped her breast at the Executive Mansion in November 2019.

She was summoned to the mansion under the pretext of having to assist Cuomo with a technical issue involving his phone, a source familiar with the incident previously reported.

The pair were alone together on the second floor of the residence when Cuomo allegedly closed the door, reached under the assistant’s blouse and began to fondle her. 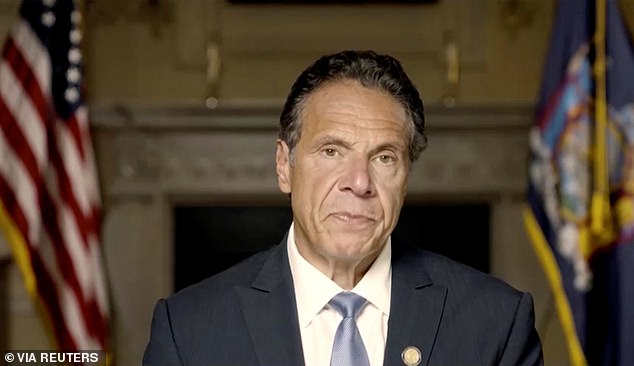 Cuomo, (pictured) who has formally been accused of sexually harassing eleven women, furiously denied impropriety and refused to resign from office

‘You’re going to get us in trouble,’ the woman said she told Cuomo, who replied, ‘I don’t care,’ according to the report.

The governor then ‘slid his hand up her blouse, and grabbed her breast, cupping her breast over her bra,’ the report alleges.

The assistant had reportedly asked Cuomo to stop.

For over three months, the woman kept the groping incident to herself, planning to ‘take it to the grave’.

However, she ended up ‘becoming emotional (in a way that was visible to her colleagues in the Executive Chamber) while watching the Governor state, at a press conference on March 3, 2021, that he had never ‘touched anyone inappropriately”.

She then confided in certain of her colleagues, who in turn reported her allegations to senior staff in the Executive Chamber, the report says. 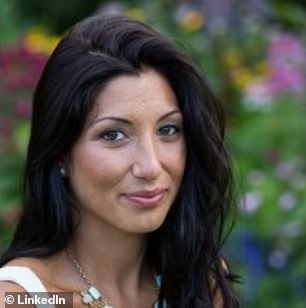 The executive assistant claims Cuomo told her to send the selfie to another staffer, Alyssa McGrath (pictured). McGrath has also accused the governor of sexual harassment

The attorney general’s report outlines a slew of accusations against Cuomo, including some made by McGrath, the alleged recipient of the smirking selfie.

McGrath, 35, was the first current employee to accuse Cuomo, and works as an executive assistant.

‘In his interactions with another executive assistant, Alyssa McGrath, the Governor made inappropriate comments and engaged in harassing conduct, including: regularly asking about her personal life, including her marital status and divorce; asking whether Ms. McGrath would tell on Executive Assistant #1 if she were to cheat on her husband – and whether Ms. McGrath herself planned to ‘mingle’ with men’.

She also claimed he looked down her shirt to compliment her on her necklace, told her that she’s beautiful in Italian and kissed her on the forehead during an office Christmas party in 2019.

Cuomo is also accused of fondling a state trooper and sexually harassing a doctor while she administered his COVID-19 test on camera, among other things. 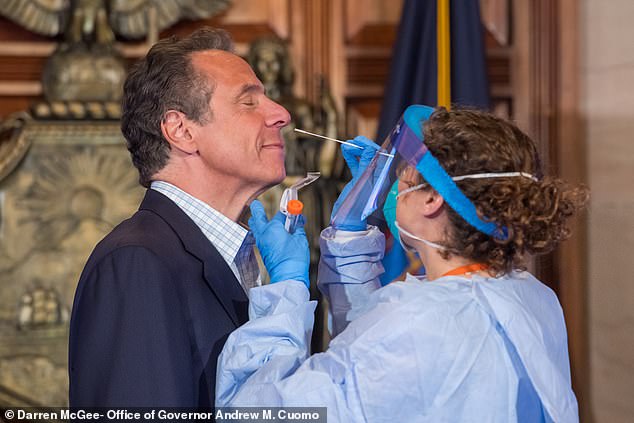 The report outlines dozens of alleged instances of inappropriate behavior, including a time Cuomo sexually harassed a doctor while she administered his televised COVID-19 test

Cuomo:, momen, selfie, shows, smirk
You may also like: