THIS is the shocking moment armed police took down a paedophile wielding what looked like a machine gun outside a pub.

Police body cam footage shows the officer and his colleague being confronted by Simon Tait, 38, pointing what appeared to be a M16 assault rifle at them in a pub car park. 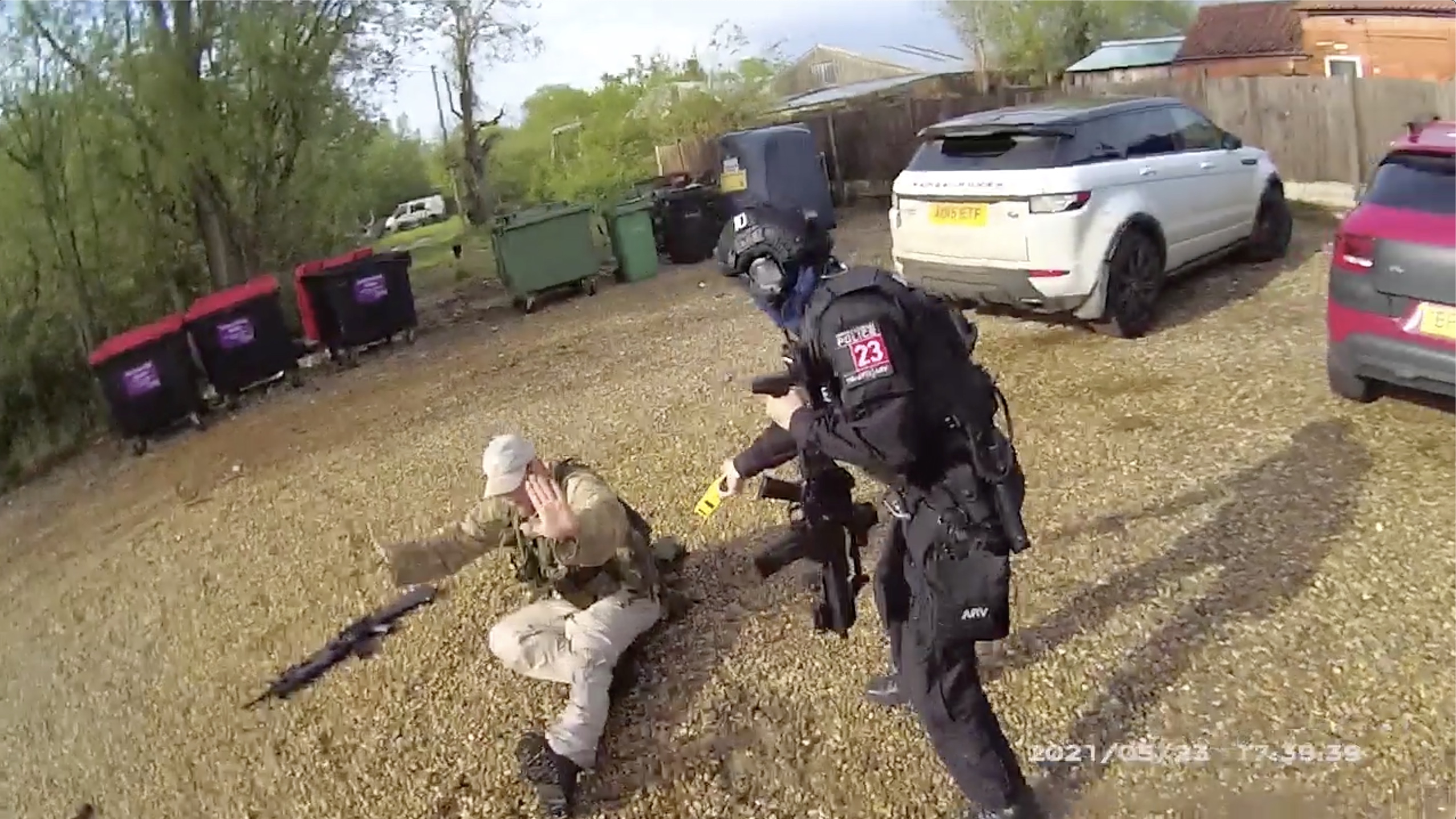 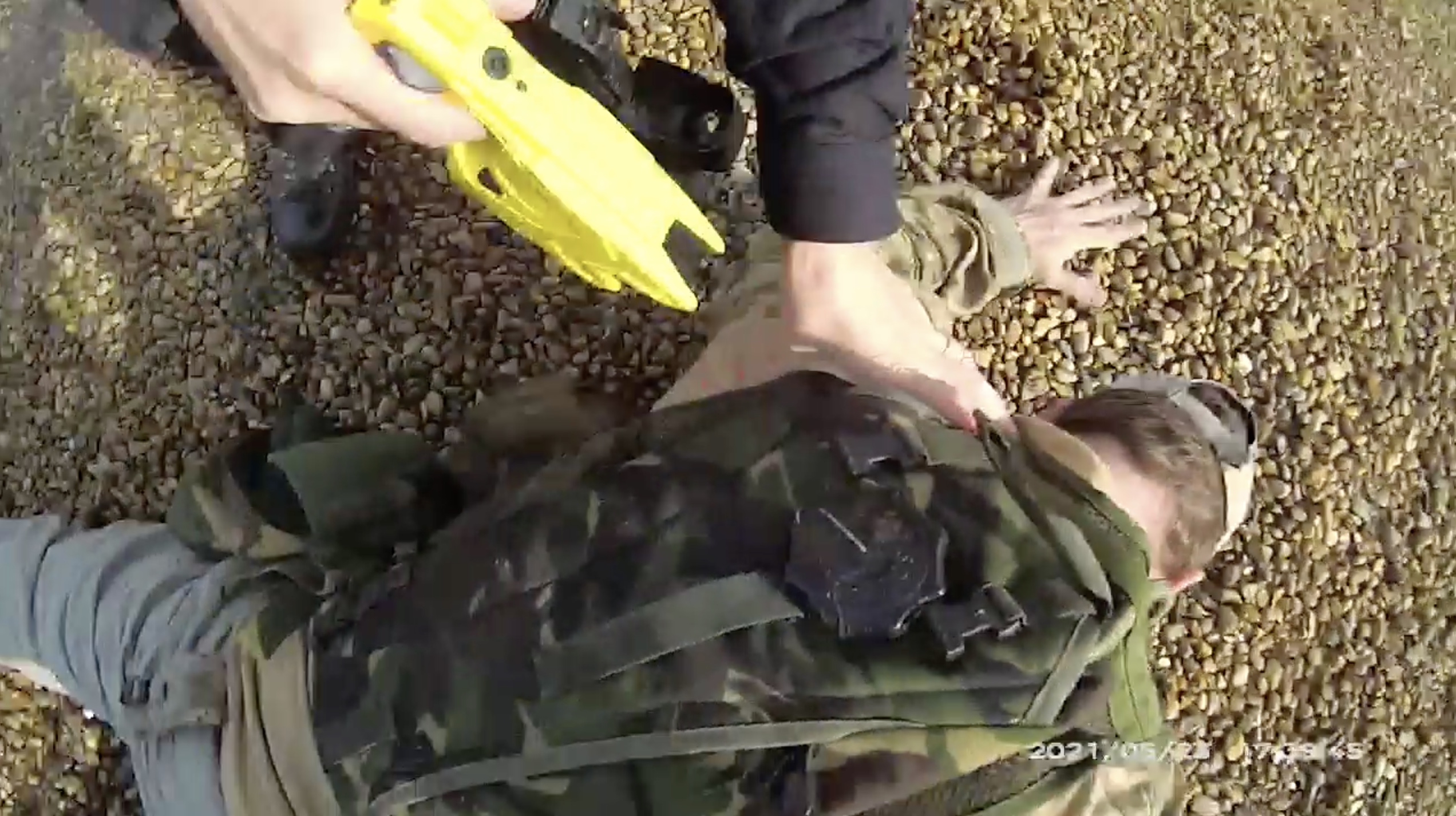 Tait was wearing military-style clothing and the officers did not know if his gun was real or fake during the confrontation outside the Coldham Hall Tavern pub in Surlingham, South Norfolk on May 23.

A cop jumped out of the driver’s seat of the car and shot him with a rubber bullet.

Tait dropped his rifle when he was floored by the bullet hitting his leg as another officer ran over to him with a police taser in her hands.

Video shows her forcing him to stay on the ground before he was arrested.

It later emerged that Tait’s gun was actually a replica and that he had been trying to provoke police to shoot him dead.

He was being investigated for possessing indecent images of children.

Tait had turned up at the pub with the gun and threatened to shoot regulars, causing some to flee and others to hide.

Tait of Surlingham, Norfolk, later attacked another cop while being treated in hospital.

He was jailed for four years and four months at Norwich Crown Court last week.

He had earlier admitted possessing a replica gun, making a threatening call to the pub, assaulting the office and possessing indecent images of children.

The officer told how he had faced an “armed officer’s worst nightmare” by looking down the barrel of Tait’s gun without knowing if it was real or fake.

He said in a victim impact statement read to the court: “I know as part of my role I may have to make life and death decisions and put myself in harm’s way to protect others.

“I also know that in the event of any incident, my actions would be scrutinised in the months and years afterwards to ensure the action taken was necessary.

“My shift prior to the incident had been fairly normal. I have a dual working as a roads policing officer in downtime, so had been doing patrols and had dealt with a man for public order offences and was doing paperwork for this matter when the call came in regarding Tait.

“I could immediately sense from the nature of the call and the way the information was being relayed over the radio that Tait was serious about his intention to provoke a police shooting.

“At the time, I didn’t think about the consequences, I just focussed on the job in hand and putting all my training into action. I had armed myself with an AEP launcher.

“When we arrived, I could see that Tait was holding what appeared to be an M16-style assault rifle.

“While the chances of Tait having access to a genuine weapon and ammunition are extremely rare, I can’t tell whether it’s imitation until it’s in my hands.

“I was faced with any armed officer’s worst nightmare, potentially looking down the barrel of a weapon that could kill me or looking at a plastic toy.

“The weapon that Tait had looked every much a genuine weapon and I’m afforded the right to assume it is a viable firearm.

“It is a daunting prospect knowing that I am about to get out of a car with a less lethal option facing a potentially lethal firearm because I want to do everything I can to not kill or seriously injure him."

The officer said he was relieved that Tait stumbled as the cops pulled into the car park.

“That action probably saved his life because it gave me just enough time to get out of the car and discharge the AEP as he levelled the firearm at me," the officer said.

“The shot was effective, we were able to safely detain Tait. I was relieved we’d been able to bring the situation to a safe conclusion.

“The extreme nature and the serious risk of Tait’s actions could have had fatal consequences that day. Thankfully this is not the sort of incident that me or my colleagues face on a regular basis.”

Norwich Crown Court heard how police were called after Tait telephoned the pub, saying: “I will come into the pub in a minute, I will be armed”.

Customer could then see Tait in the car park “holding what looked like a weapon”.

One regular told Tait to “put the weapon down” which he did before later picking it up and pointing it at him.

The drinker recalled how he felt “scared like he never did before” and “genuinely thought he was going to die”.

The court was told how the police officer had just enough time to select a non-lethal baton round as Tait had slipped as the police car pulled up in the car park.

Tait was taken to hospital due to the baton round injury to his leg, but he was difficult with medical staff and became more aggressive.

The court heard he assaulted the police officer who was with him by grabbing and twisting his wrist and trying to spit at him.

The incident happened three months after police investigating an image which had been shared online carried out a warrant at Tait’s home.

Several devices were seized, and police found more than 1,000 indecent images of children on his mobile phone.

Judge Andrew Shaw told Tait that he had become “completely unstable” due to earlier events that caused him to “want to end your life”.

He said Tait was “clearly intending a fatal action” by provoking police and accused him of creating a very serious risk of severe psychological harm to those present as well as a high risk of his own death.

Tait was also given a ten-year sexual harm prevention order and put on the sex offenders register for a decade.

If you are affected by any of the issues raised in this article, you can call The Samaritans for free any time, even on a mobile without credit, on 116123. 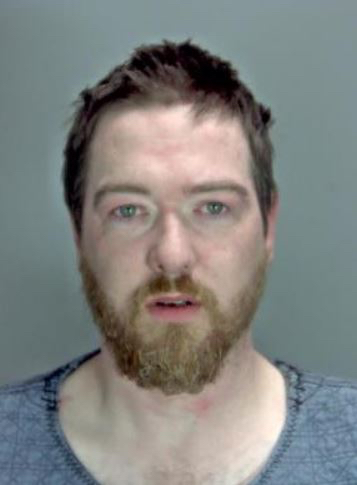 Armed, moment, police, SHOCKING, t
You may also like: