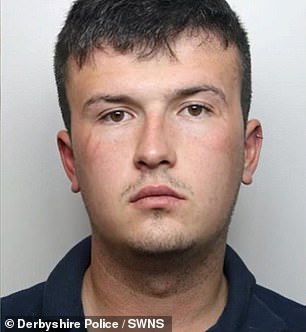 Jake Saxon (pictured), 23, glassed a reveller in the face in a brutal unprovoked attack in The Vault, on High Street, Buxton, Derbyshire, on September 12 last year. He was jailed for 12 months on July 29

This is the shocking moment a nightclub reveller was left scarred for life after being slammed in the face with a shot glass by a drunken thug on the dancefloor.

The mechanical engineer admitted assault occasioning grievous bodily harm and was jailed for 12 months at Derby Crown Court on July 29.

A court heard Saxon approached the man and said something to him which the victim did not hear – before stepping back and slamming a shot glass into his face.

Disturbing CCTV footage, released by Derbyshire Police, shows the victim with blood pouring down his face following the vicious assault at around 1.10am.

He was taken to hospital where he needed stitches for the wound and he has been left with permanent facial scarring.

Saxon was ejected by bouncers before being arrested the following day by police at his home in Leek, Staffordshire.

PC Lora Holdgate, of Derbyshire Police, said afterwards: ‘Saxon is now facing the consequences of what was seemingly a split-second decision to carry out an unprovoked assault which left the victim with permanent scarring, and a lasting impact on his mental wellbeing.

‘Although no sentence will make up for that, I hope that the result at court will offer him some closure.

‘We would like to thank The Vault for their actions that evening and for working with us throughout the investigation to help ensure a conviction was secured. 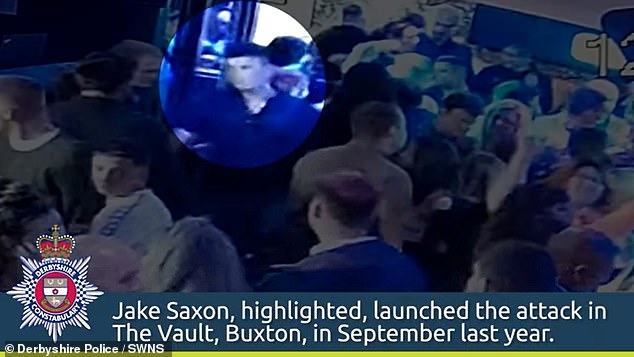 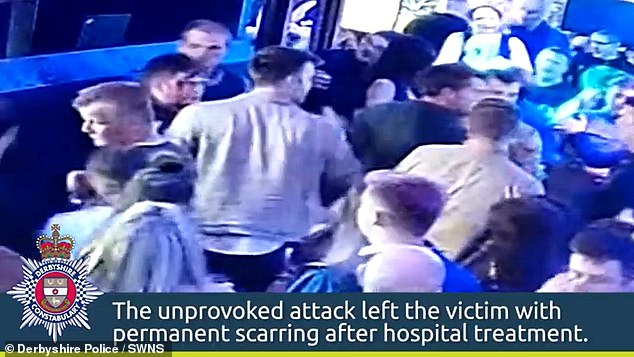 Disturbing CCTV footage, released by Derbyshire Police, shows the victim with blood pouring down his face following the vicious assault at around 1.10am

‘Violence has no place in our licenced premises and is completely unacceptable.

‘This case is an example of how we will work to ensure those involved in this type of behaviour will be found and brought to justice.’

It comes after footage released earlier this month showed another shocking glass attack which also left a victim scarred for life.

A mother was caught on camera glassing a teacher from her child’s school in a drunken row outside a seaside bar.

Kelly Thomas, 38, was ordered to pay £600 compensation to the shocked educator after the judge watched CCTV images of the attack.

A court heard Thomas ‘saw red’ in a drunken row outside the Beach Comber bar in Porthcawl, South Wales.

She threw her drink at the teacher’s face before pushing the glass itself in her face.

Prosecutor Jenny Yeo said the victim was taken to hospital where she was treated for multiple superficial lacerations on her face.

The comprehensive school teacher said: ‘The incident really affected my every day life. I have a physical scar and the psychological damage is significant. 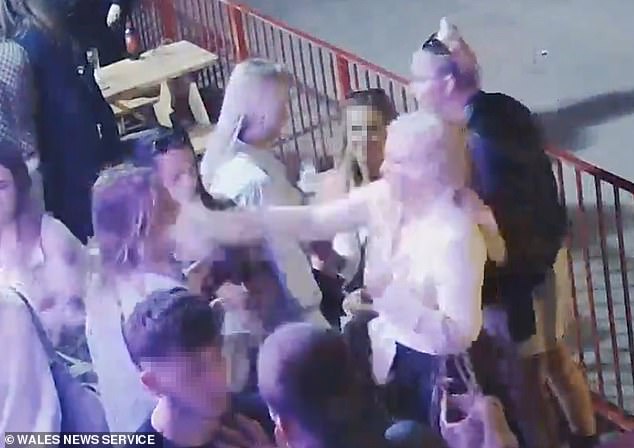 Kelly Thomas, 38, was ordered to pay £600 compensation to the shocked teacher left scarred for life after the judge watched the shocking CCTV images of the attack

‘I really struggled to come to terms with what happened and how it has left me feeling.

‘I have flashbacks and can remember people saying “Oh God look at her face”.

Thomas, of nearby Nottage, was ‘horrified, remorseful and embarrassed’ by her actions.

She admitted assault causing actual bodily harm at Cardiff Crown Court. The CCTV of the glassing was released by the Crown Prosecution Service after it was shown in court.

Ieuan Bennet, defending, said she was a mother of two children and was worried about them if she was imprisoned.

Recorder Victoria Hillier said: ‘Your reaction was totally inappropriate and you are ashamed of yourself, you should be. On that date you lost control of your emotions.’

Thomas was sentenced to eight months imprisonment suspended for 18 months.

She was also ordered to carry out a 20-day rehabilitation activity requirement and to pay £600 in compensation. She was made subject to a restraining order for five years.