A Queensland man has slammed McDonalds as ‘plastic food’ after comparing a Big Mac he was just served to one he kept in the fridge for three months – with little discernable difference.

The confronting video shared Friday showed the man criticising the toppings on the burger he had just bought by comparing them to the one he had bought and stored since August 25.

‘That’s been sitting in my fridge for three months…Let’s have a look at the one from today,’ he said while inspecting the new burger. 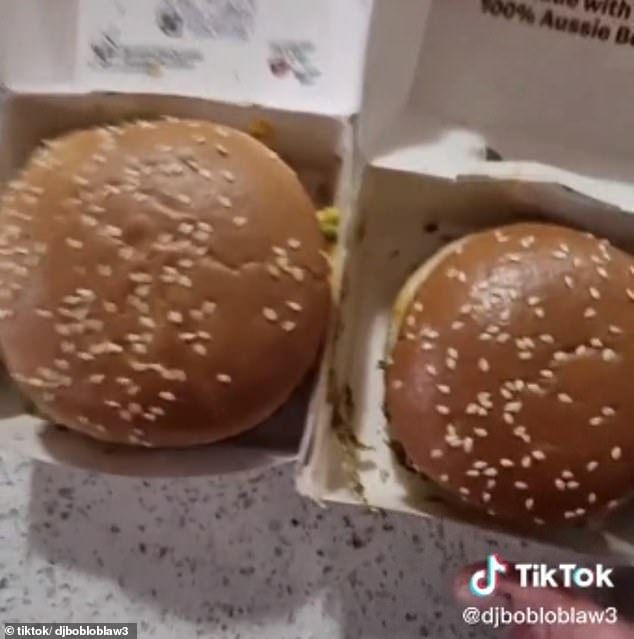 Most of McDonald’s’ menu items have very low water content and a high sodium level which means the food dries relatively quickly.

The food is also prepared in a food-safe environment and cooked at high temperatures that kill any bacteria that kick-start the rotting process.

‘Is that the lettuce and onion I got? Maccas, you should be f***ing ashamed of yourself.’

He continued to pull apart the lacklustre new Big Mac and compared it to those pictured in McDonald’s’ advertising.

He then opened the old Big Mac box to show an eerily similar burger.

‘Look at that, it’s exactly the same. It’s just shrunk,’ he said.

‘No mould, no rot, the burger’s hard. How’s the lettuce not even rotten?

‘You’re putting this sh** in your stomach and your child’s stomach. It’s plastic food, that’s what you’re putting in your guts.

‘Absolutely full of preservatives. The people who do it everyday, it’s no wonder you’re so fat.’

The trend was kick-started by an Alaskan woman in 2016 – though similar posts had floated around for years prior – who shared photos of a six-year-old Happy Meal. 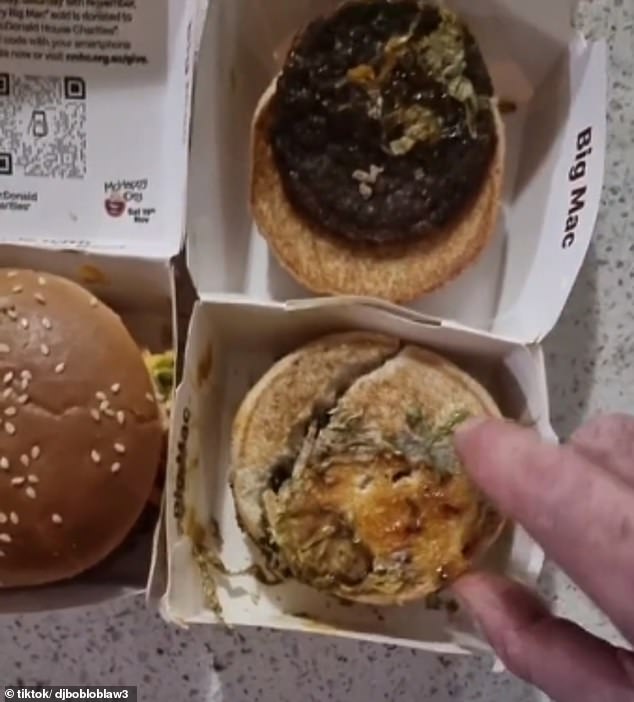 Australian dietician Susie Burrell said the result of Mr Loblaw’s experiment ‘isn’t surprising’ because of the amount of preservatives in everyday food.

‘You know, you buy a pack of wraps now and they last a month.

‘But its a good example of how heavily processed fast food is, it’s not great for us.

‘It’s not just McDonald’s but fast food in general. It takes certain chemicals and requires extreme processes to make their products.’

National Heart Foundation researcher Stephanie Partridge said there are bigger health risks than preservatives to be worried about when eating McDonald’s. 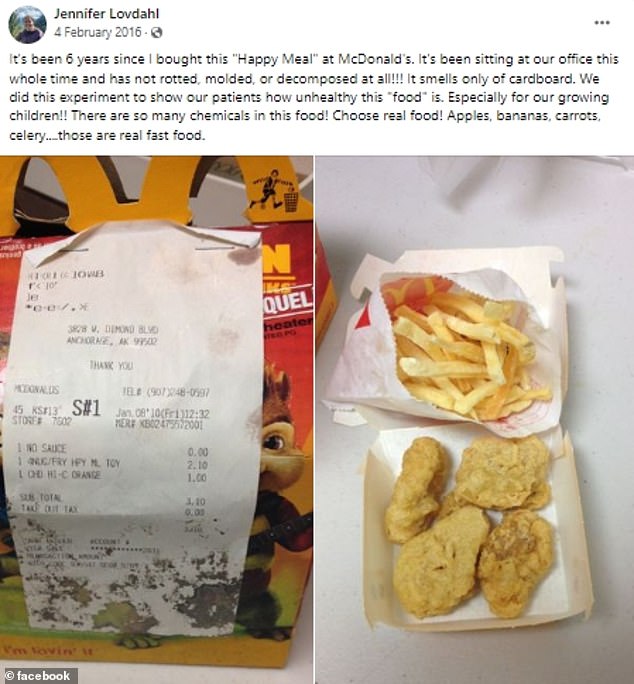 ‘In Australia, most fast food is classified as discretionary food, or junk food,’ she told Daily Mail Australia.

‘From the last national health survey, we know 40 per cent of people’s diets come from these foods.

‘These products are often ultra processed and are far removed from the original ingredients.

Dr Partridge added the biggest problem with fast food is that it’s becoming ubiquitous and an affordable option as the price of healthier alternatives rises with inflation.

‘Like all fast foods, McDonald’s is so readily available and convenient,’ she said.

‘It’s how our cities are designed, these massive fast food companies are taking over.

‘With the rising cost of living, how can you blame someone for choosing fast food over expensive fresh options?’

‘We have supported Aussie farmers for over 50 years and our Big Macs include 100 per cent Aussie beef, crisp Aussie lettuce and Aussie grown pickles.

‘Our food is made to be consumed upon purchase or delivery to ensure quality and freshness.’

Dehydration, high blood pressure and HUNGER pangs: What happens to your body one hour after eating a McDonald’s Big Mac revealed

By Anucyia Victor for MailOnline

Visual by US-based Fast Food Menu Price claims to show the effects a US McDonald’s Big Mac burger can have on your body after an hour of eating it.

It claims that in the first ten minutes the meal will raise your blood sugar to abnormal levels, cause dehydration after half an hour, hunger pangs within 40 minutes and will slow down digestion after 60 minutes.

Summarising the ingredients contained in a Big Mac served in the US, the graphic also reveals that it can take the body up to three days to digest the burger.

The ingredients in an Australian Big mac are different from those in an American Big Mac. 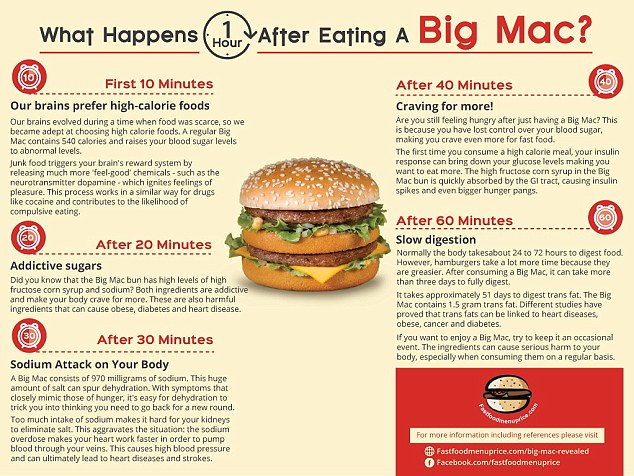 It takes approximately 51 days to digest trans fat. The company claims a Big Mac in the US contains 1.5 gram trans fat. Different studies have proved that trans fats can be linked to heart diseases, obese, cancer and diabetes.

The graphic concludes by advising diners to only indulge in Big Macs occasionally.

When contacted for comment, a McDonald’s spokesperson told FEMAIL: ‘We do not recognise the ingredients or nutritional information within this graphic. The so-called facts in this image are misleading and bear no resemblance to the Big Mac available to customers in the UK.

‘We have been displaying nutritional information for all of our menu items for over 30 years so it is a shame to see such inaccurate figures and information being circulated.

‘We have removed all artificial trans-fat from our menu, the iconic Big Mac contains no artificial colours or flavours and the bun does not contain any corn syrup.

‘For over 10 years we have been evolving our recipes to reduce salt and sugar, reducing the sugar content of our Big Mac by more than 22 per cent.

‘We would encourage our customers to visit the accurate nutritional information section available on our website or mobile phone app to help them make informed choices about their food.’