‘Evil ghost that’s haunted my life’: Son of the man who made Simon Cowell famous Simon Lythgoe was abused by a prep school teacher. Here he tells how he’ll see his tormentor face justice

Stripped to his underpants, 11-year-old Simon Lythgoe found himself wrestling with a teacher on his living-room floor.

The disturbing scene was only interrupted when his father arrived home early from work and – incensed by what he saw – threw the teacher out of the house and warned him never to return.

Because this was the 1980s, with child sex abuse a subject that was rarely discussed, the matter went no further. Worse still, the abuse continued.

Simon now plans to attend Wood Green Crown Court in North London on September 2 to watch Wells, who is currently serving a 15-year term for his previous convictions, being sentenced 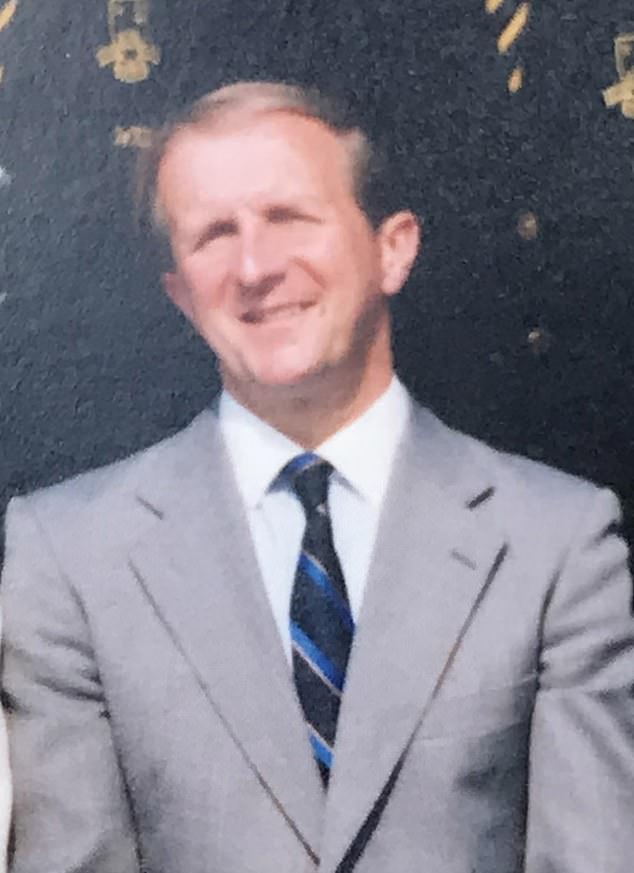 Peter Wells, his deputy headmaster at Keble, a private preparatory school for boys in North London abused Simon from the ages of 9-12

For Simon, however, it was the first time he understood that there was something wrong about the behaviour of Peter Wells, his deputy headmaster at Keble, a private preparatory school for boys in North London.

Between the ages of nine and 12, he was subjected to vile attacks by Wells. Like many survivors of childhood sexual assault, Simon felt a deep sense of shame and guilt, spending most of his adult life desperately trying to bury any memory of Wells, until it almost destroyed him.

Now aged 46, he is waiving his anonymity after 74-year-old Wells finally pleaded guilty to a sickening catalogue of crimes against young boys spanning decades.

A Mail on Sunday investigation has discovered there were multiple complaints made against Wells at Keble, which were either ignored or never followed up.

His crimes only caught up with him in 2017 when three victims came forward to the police. He now faces sentencing for separate offences relating to Simon and another victim.

Speaking to The Mail on Sunday, Simon tells how he was aged just five when the deputy headmaster, then in his 30s, scooped him up and patted him on the bottom. But the abuse began in earnest four years later after Wells befriended his parents, who were both carving out successful careers in showbusiness.

Recalling how his abuser offered to help with his lessons, Simon says: ‘Peter Wells came across as a very loving, sweet, supportive man.

‘And in a family where both my parents were working very hard, he would take me under his wing and almost parent me like he cared.

‘When I look back, I realise how conniving and subtle these sexual predators are. How they manipulate parents by slyly becoming their friends and making themselves useful.’

Although the wrestling incident occurred in the Lythgoe family home, the abuse typically happened when Wells took his young victim back to the house he shared in Cheshunt, Hertfordshire, with his ageing mother for private lessons on Friday evenings.

Once there, they would often eat shepherd’s pie for dinner, while Wells would tease Simon about how skinny he was and give him Guinness to drink, claiming it would bulk him up.

At first, Wells – who was also head of both science and games – tested the waters by suggesting they take a nap on his bed before tutoring.

But as the weeks passed, he grew more confident and would pleasure himself while molesting the boy. Simon says: ‘I can remember every detail of his house. The musty, old-person smell, the very steep stairs leading up to his bedroom.

‘The old mahogany wardrobe and the thick, dark covers on his bed.

When Simon’s grades began to suffer, Wells suggested that he be held back a year in school. Oblivious to Wells’s ulterior motives, his victim’s parents readily agreed.

Even after the wrestling incident, Simon continued to be tutored by Wells, which prompted blazing rows between his father and mother, who defended Wells because she trusted him.

For her part, Simon’s mother remains riven by guilt.

‘I hate myself for failing to protect my kid,’ she says. ‘I should have seen that Simon wasn’t the same happy child he was before.

‘I completely trusted Wells, but he was clearly a very devious man. I just wish Simon had been able to tell me.’

It was around this time that Simon became a difficult pupil and, he says, ‘started to rebel against teachers and, eventually, all forms of authority’.

By the time he reached his late teens, he decided to emigrate in a bid to escape his childhood trauma. Following in his father’s footsteps, he forged a successful career in television production and, after working on Popstars in Australia, convinced his father to license the format for ITV.

But despite his success, happiness eluded Simon and two marriages collapsed. He says: ‘I suffered from depression and was suicidal at times. But I had buried the Wells saga so deep I had no idea what was creating this dark shadow over my life.

‘I was into escaping in any way I could through drugs, drinking, sex. Throughout my adult life, I was in and out of rehab for alcohol issues. I was definitely a very disturbed, sick person because I had a huge amount of shame and guilt.

‘It took me years to realise it all started with Keble school and Peter Wells. Consistently having issues with authority, personal relationships breaking down and then running away – it’s been the story of my life.’

Simon left Australia for Los Angeles to work with his father on American Idol, which became one of the most successful shows in the history of US television, pulling in more than 30 million viewers at its height.

Still, the pain persisted and Simon’s life started to unravel in 2016. Two friends told him about an experimental therapy centre called Onsite in Nashville, Tennessee, which they credited with transforming their lives. Sceptical at first, Simon eventually decided to go along with an open mind.

One session involved a role-playing scenario where other attendees stood in for his mother, father and other family members. The therapist assigned the final attendee as ‘person unknown’. According to Simon’s own account, he had ‘just hit rock bottom in both my personal and professional lives’ and ‘just hated myself’.

He says: ‘I had two choices: either take my own life or try to figure out why I’m in this predicament. I was walking around the room, talking to my parents as it were, when this sudden wave of anger came over me. It was like a switch had been flicked. Suddenly I realised I had been carrying around this daunting, evil ghost in my subconscious my entire life.

‘I just let so much pain, anger and hatred burn out of me. I recognised that all the strings in my life were being pulled by this “person unknown”: Peter Wells.’

He continues: ‘I realised Wells could still be alive and still harming children. I felt obligated to tell the police and track him down.

‘Since I live in the US, I was amazed to learn the UK is one of the only countries in the world that has no statute of limitations on child abuse. I looked Wells up and saw that he was [working as] a photographer. I was certain he’d have been taking bad pictures of children.’ 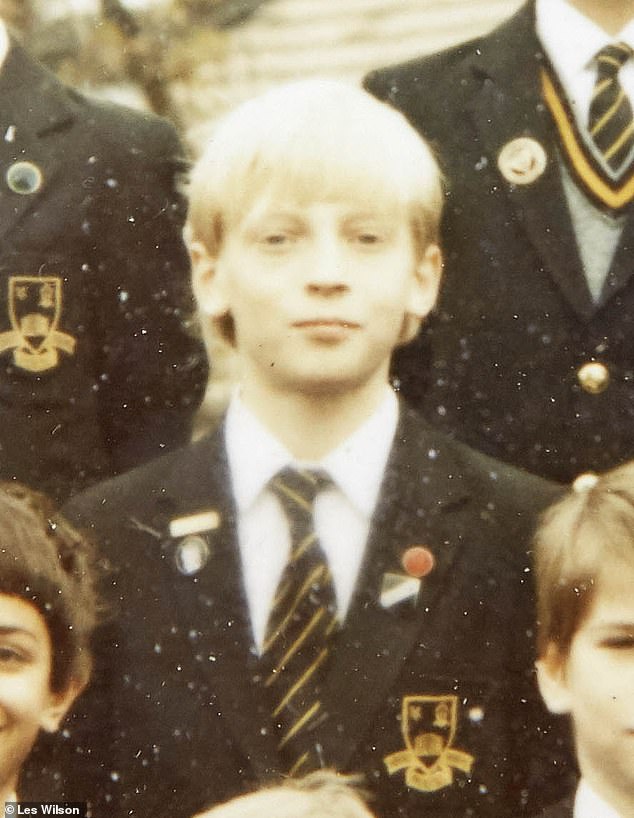 Because this was the 1980s, with child sex abuse a subject that was rarely discussed, the matter went no further. Worse still, the abuse continued. (Simon Lythgoe pictured in 1987)

By chance, Simon’s best friend in the UK happened to pick up a copy of the London Evening Standard in 2018 and saw a story about Wells appearing in court.

Although the Crown Prosecution Service told Simon it was too late to join that case, police flew out to LA to take evidence from him for the current case.

As with Wells’s first trial, he had initially denied responsibility and was set to plead not guilty, although he later changed his plea.

Simon now plans to attend Wood Green Crown Court in North London on September 2 to watch Wells, who is currently serving a 15-year term for his previous convictions, being sentenced. He says: ‘I want to just look him in the eyes and say, “How dare you do that to a young child, you monster.” I hope he rots and dies in prison.

‘That man is a danger to society. Everything in his life was about putting himself in a position where he could abuse children.’

Incredibly, Wells left Keble only after it emerged he had lied about having a university degree – and, even then, was allowed to resign. He was also a Scout leader, a coach at Haringey Athletics Club and was allowed to foster troubled children.

Simon says: ‘I just pray I can give a child in a similar situation the strength to come forward where I wasn’t able to and to help parents spot the warning signs. That’s my hope for this story – that parents will see it and recognise some of the signs.

‘I hope that teenagers who were abused are now mature enough to look at this and realise that what happened to them was wrong and they can do something about it.

‘I’ve waited a lifetime for justice, and now I finally have it.’

It was claimed to the MoS that at least three teachers complained about Wells to former Keble headmaster Andrew Collier, but were all let go or fired – something Mr Collier vehemently denies.

Mr Collier, now 76 and living in Porthcawl, South Wales, claims he had reported concerns about Wells to the school governors.

He said: ‘I did have concerns about Peter being over-familiar and over-friendly with the pupils. I regret the fact I trusted him and thought he was a valuable member of staff.

‘My feeling clearly is that of being totally let down and horror on behalf of the kids in my charge.’

A spokesman for Keble, where fees run up to £5,330 per term, said: ‘We deeply regret the harm caused by Mr Wells and apologise to anyone who may have been affected. We place safeguarding at the forefront of all we do and have robust procedures for recruitment and training. Any allegations of harm are treated extremely seriously.’

Simon Lythgoe did not receive a fee for this article. Instead a donation will be made to a charity for child victims of sexual abuse. If you have been affected by the issues raised, please email: [email protected]