Singapore: Cast as a test case for nations trying to make the jump from a COVID-zero approach to living with the virus, Singapore remains intent on reaching a “new normal”.

Yet it may be as long as six months before the south-east Asian city state returns to the kind of freedoms being experienced in Europe.

In a national address on Saturday, Singapore Prime Minister Lee Hsien Loong defended last month’s tightening of restrictions in response to soaring infections, saying it was needed to avoid the health system being overwhelmed. 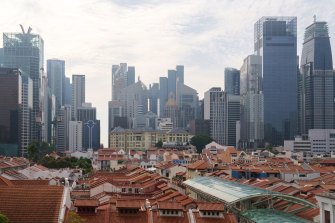 Singapore is broadening international travel with the addition of quarantine-free lanes with nine more countries.Credit:Bloomberg

But despite a double-dose vaccination rate of 83 per cent it remains on guard amid confusion about the government’s strategy.

“All of you are understandably anxious. Many have found it difficult to keep up with new policies and changes to measures. I understand your concerns and frustrations,” Lee said.

“Some ask: What happened to our plans to build a COVID-resilient nation? Has the government changed its mind? Are we on track to re-opening our society?” 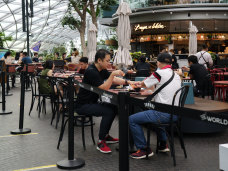 Diners gather in groups of two, which gatherings are limited to under increased curbs in Singapore.Credit:Bloomberg

New cases have gone up rapidly in the city state of 5.5 million since opening up from its last semi-lockdown on August 13, with nearly 50,000 in the past 28 days alone including 3590 on Friday.

There have been as many as nine deaths a day in that time, increasing Singapore’s total virus toll to 142, and on Friday there were eight more as well as 307 people requiring oxygen and 41 in intensive care.

The Ministry of Health here reports 98.4 per cent of those infected in the past month have had no or mild symptoms.

But despite pivoting to a system of home recovery and community care to ease pressure on hospitals, Singapore authorities remain worried in particular about the elderly, for whom it has begun a booster shot program, and children under 12 who can’t yet be vaccinated.

Its limited hospital capacity is another major concern. Tents have been erected outside hospitals to help cope with a surge of infected people scared their condition might worsen.

Those who are not very ill are being urged to recover at home, with Lee saying on Saturday: “We need to update our mindsets. We should respect COVID-19 but we must not be paralysed by fear”.

But the Prime Minister forecast that even with 5000 new cases a day, about 100 of them would become seriously sick, “not a small number”, he said. 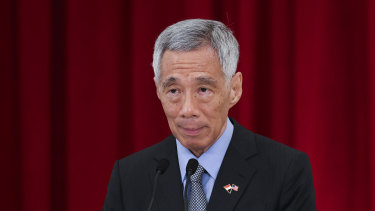 Singapore’s Prime Minister Lee Hsien Loong: the country is opening to some travel but it will be a long road to the new normal. Credit:AP

“After this surge stabilises, we may see future surges, especially if new variants emerge,” Lee said.

“We may have to tap on the brakes again if cases again grow too fast, to protect our healthcare system and healthcare workers. But we will be better able to cope with future surges.”

Lacking the natural immunity of countries hit far harder by the virus, Lee said Singapore would be better placed to resume a sense of normality when new cases stablised at “perhaps hundreds a day, but not growing”.

“It will take us at least three months, and perhaps as long as six months to get there,” he said.

“A few countries have reached this stage, for example in Europe. But they have paid for it dearly, losing many lives along the way.“

Lee said the “next few months will be trying”, expecting daily cases to continue rising for some weeks.

“It has been a long campaign against COVID-19. The war continues. But we are in a much better position now, than a year or even six months ago,” he said.

“Sometimes it might not feel like it, but we are making steady progress towards the new normal.”

Despite its struggles Singapore’s determination to retain its aviation hub status by reconnecting itself back to the world has led it to take further steps in relaxing quarantine requirements for fully vaccinated passengers.

Government figures showed that of the 1926 travellers who arrived in Singapore on vaccinated-only flights from Germany and Brunei, only two imported the virus and they were both identified at the airport and isolated.

As well as the US, UK, Canada and South Korea, new bubbles will open with Denmark, France, Italy, the Netherlands and Spain, with travellers requiring only testing not quarantine.

“Singapore’s survival and success depends on being open and connected to the world,” Singapore Transport Minister S Iswaran said.

“The experience over the past month has given us the confidence that we can safely expand [quarantine-free travel] to other countries.“

Singapore also has seven-day home quarantine for arrivals from a range of countries including Australia.

But, opens, Singapore, travel, up
You may also like: