Sir Alex Ferguson wins battle to stop two five-bedroom mansions being built near his £2.3million home after he slammed the ‘astonishing’ plans that would ‘destroy’ character of area

Sir Alex Ferguson has won his latest planning war with his neighbours over their bid to build two luxury mansions across the road from his £2.3million home in Cheshire.

The former Manchester United manager, 79, objected to a proposal for two five-bedroom properties to be built on his street in Wilmslow, describing the plans as ‘astonishing’ and damaging to the character of the area.

Cheshire East Council has now refused planning permission for the houses and said they would not be in keeping with the surrounding area.

The application, which was submitted by local building firm Henderson Homes, was for two luxury homes with balconies to replace a ‘rundown’ 1930s property. 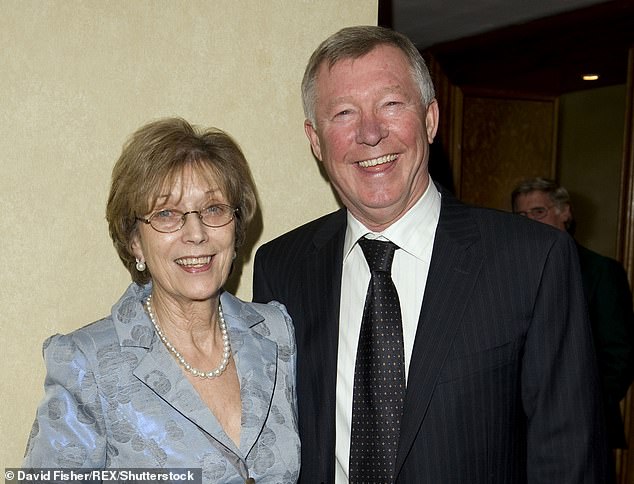 The 79-year-old former Manchester United manager lives in a £2.3 million property on the posh Cheshire road in Wilmslow, Cheshire, with his wife Cathy (pictured together) 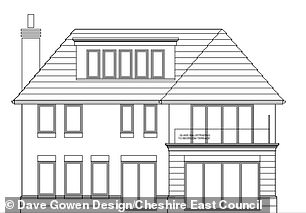 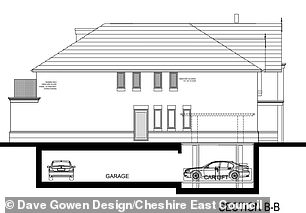 Ferguson joined with a number of other residents to oppose the development saying the owners ‘have shown no respect of their neighbours’, and also raised concerns that it would increase traffic and cause a loss of trees.

A handwritten objection letter sent from Ferguson’s address to the council read: ‘On hearing of a new proposal to build two houses on the site, I felt I must register my grievance at such an astonishing idea.

‘First of all, the owners of the said property have shown no respect for their neighbours nor have they realised the impact this development has in terms of the number of cars entering this site.

‘It really destroys the character of the road and also the nearness to their neighbours next door will be suffocating. 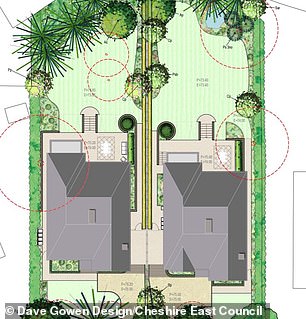 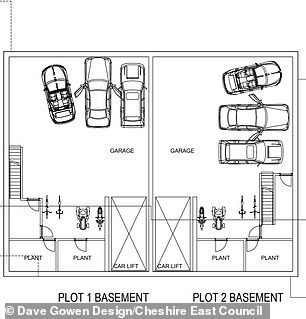 The former Manchester United manager, 79, objected to the proposal along with a number of other residents describing the plans as ‘astonishing’ and damaging to the character of the area and also raised concerns that it would increase traffic and cause a loss of trees

‘One other aspect, I must draw your attention to the removal of trees which is part of the character of the road.

‘I hope the planning committee recognise the seriousness of my concern.’

The application’s design statement said: ‘The proposals comprise the subdivision of the existing, large plot to create two plots, each containing a single dwelling.

‘The design of the houses and their associated garden settings and frontages have been carefully considered concurrently to ensure the redevelopment of the plot maintains and enhances the existing residential character of the road and the surrounding area.

‘The proposal has been designed to reflect the character of the area by maintaining the low density grain with the buildings sited centrally in their plots with large distances to side boundaries.

‘The scale of the houses is entirely consistent with other properties in the area, being two storeys high with some accommodation in the roof space.’ 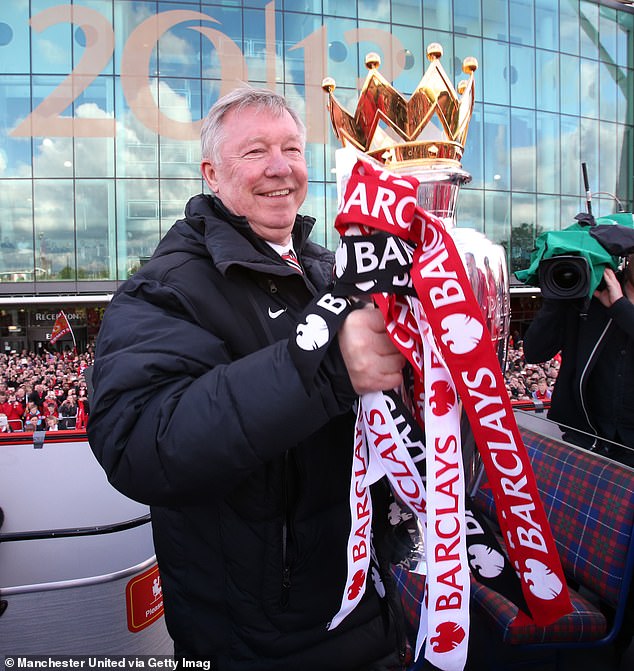 Glasgow-born Ferguson retired from the Old Trafford hot seat in May, 2013, after 27 years at the helm. During his time at Manchester United he won 13 Premier League titles and two Champions Leagues. (Pictured with the Premier League trophy in 2013)

‘However the scale, form massing and density of the two dwellings would be contrary to policies of Wilmslow Neighbourhood Plan as they would detract from the area’s character and identity. It is therefore recommended for refusal.’

The 79-year-old former Manchester United manager lives in a £2.3 million property on the posh Cheshire road in Wilmslow, Cheshire, with his wife Cathy.

It is one of the most sought after places to live in the country, after London, and falls in the Cheshire Golden Triangle – favoured by footballers and celebrities.

However, the retired football manager has not always been this successful in blocking planning applications he opposed.

Sir Alex Ferguson strongly objected to proposals for next door neighbours – the Wilsons – to demolish their two-storey house, and build a new three-storey mansion.

However planners at Cheshire East gave the development the green light in July last year.

Glasgow-born Ferguson retired from the Old Trafford hot seat in May, 2013, after 27 years at the helm.

During his time at Manchester United he won 13 Premier League titles and two Champions Leagues.

He had emergency treatment on a brain haemorrhage in May 2018, and spent several days in intensive care at Salford Royal Hospital, near Manchester.

ALEX, Ferguson, has, His, Sir, won
You may also like: