Sir Mo Farah says he is ‘relieved’ that the Home Office does not plan to take action against him after revealing he was brought to UK illegally as a child — as police ‘assess’ claim he was trafficked and forced to work as a domestic servant.

The four-time Olympic champion, 39, said there were a lot of people he ‘owed my life to’ and that had given him the ‘strength’ to talk about his past.

Sir Mo, born born Hussein Abdi Kahin, has revealed in a BBC documentary titled The Real Mo Farah how he was brought to Britain from Somalia illegally, having assumed the name of another child, after his father was killed in the civil war.

He was later helped to obtain UK citizenship by his school PE teacher Alan Watkinson, while still using the name Mohamed Farah.

The UK Home Office has the power to legally strip individuals of their British citizenship if it is found to have been obtained illegally.

But the department has since said that it would be taking no action ‘whatsoever’ against the athlete. 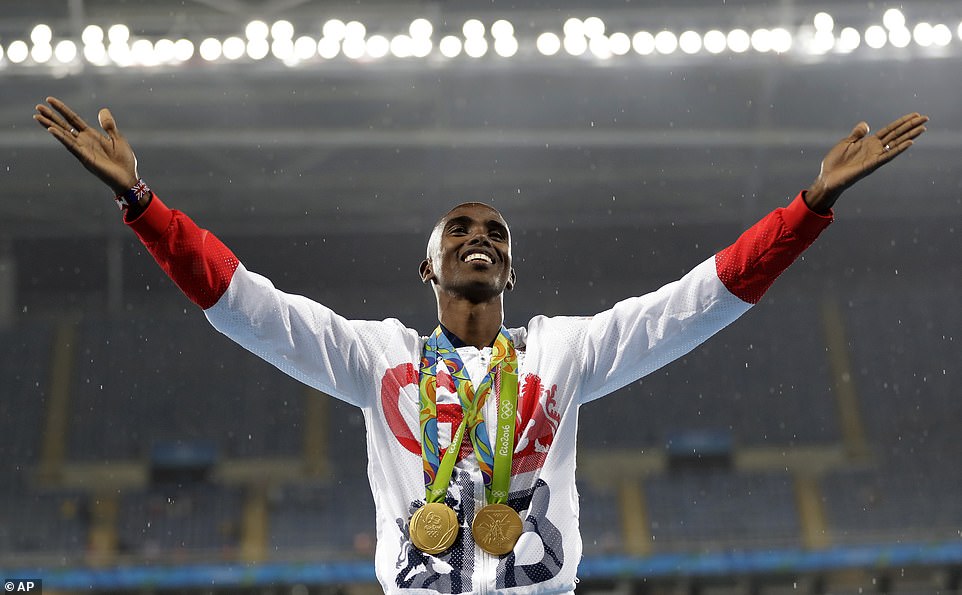 Sir Mo Farah says he is ‘relieved’ that the Home Office does not plan to take action against him after revealing he was brought to UK illegally as a child. Pictured at the 2016 Olympics in Brazil 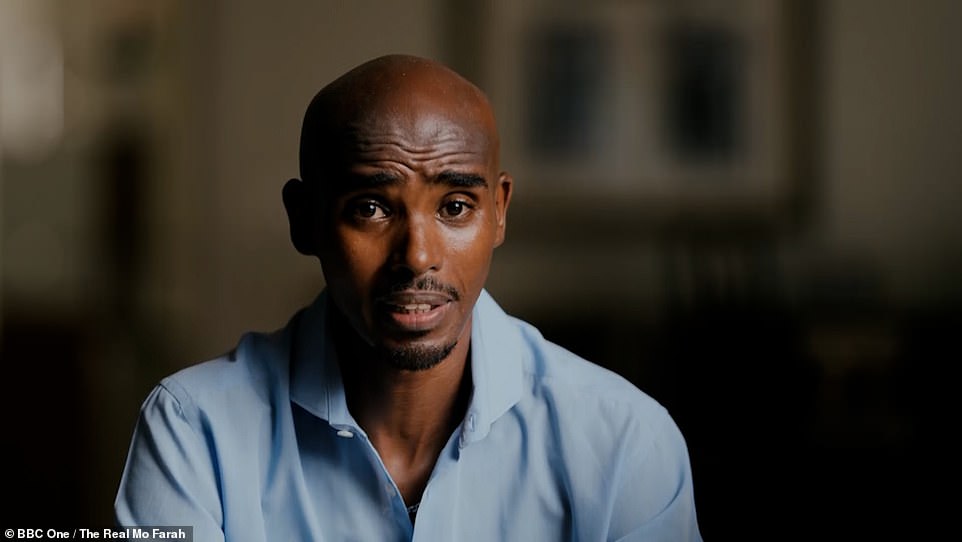 A Number 10 spokesman said of the Olympic champion: ‘He is a sporting hero, he is an inspiration to people across the country.

‘It is a shocking reminder of the horrors that people face when they are trafficked. And we must continue to clamp down on these criminals who take advantage of vulnerable people.’

Asked if the Home Office would be taking any action against Sir Mo, he said: ‘Absolutely not.

‘I think the Home Office has been very clear that no action whatsoever will be taken against Sir Mo and that is in line with the guidance.’

Asked during a BBC interview how he felt about the Government’s response, Sir Mo said ‘I feel relieved’. 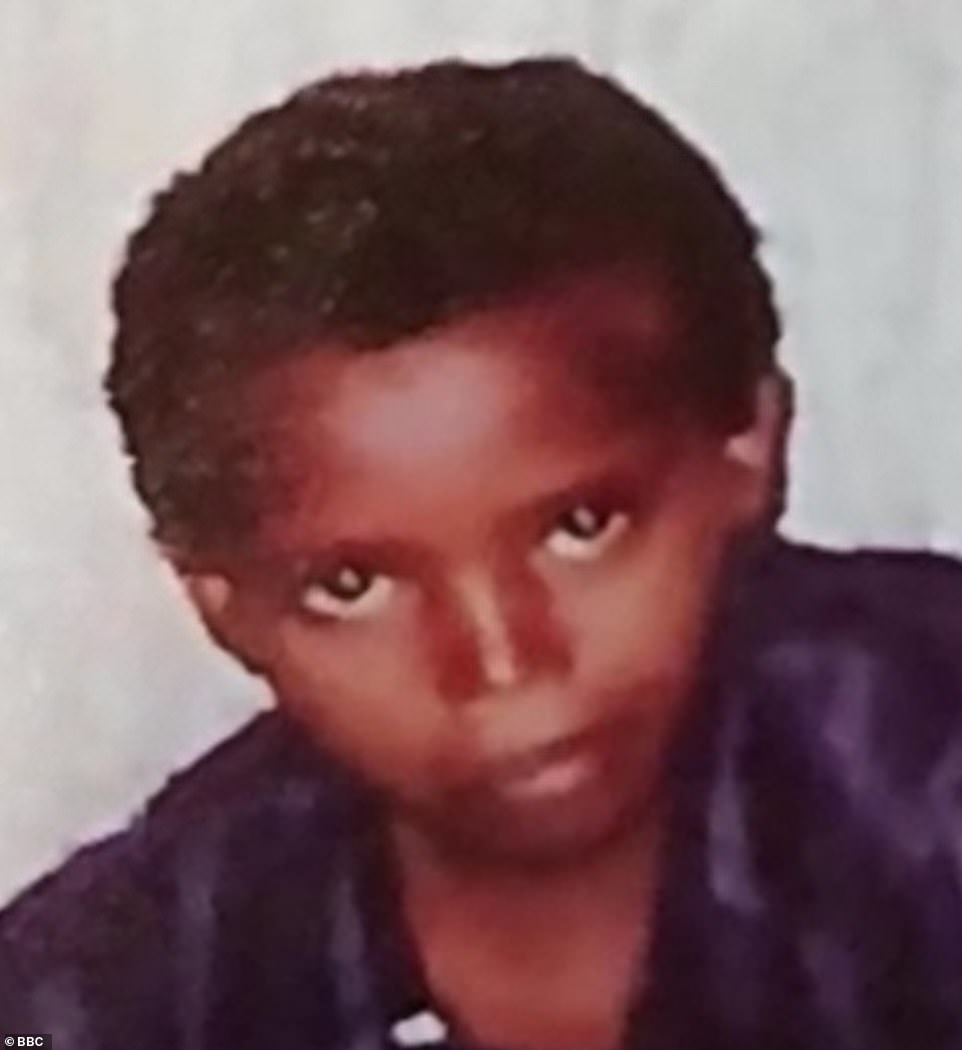 An undated picture of Mo Farah as a young boy in Somaliland before being trafficked into Britain, where he spent his early years in domestic servitude

‘This is my country, if it wasn’t for Alan (Watkinson) and the people that supported me throughout my childhood then maybe I wouldn’t even have the courage to be doing this.

‘There’s a lot of people that have been very supportive, particularly my wife, throughout my career and gave me the strength to come and talk about it and telling me it’s okay to do this.’

It comes after the Metropolitan Police said it was ‘assessing’ Sir Mo’s allegations that he was trafficked into the UK as a child and forced to work as a domestic servant.

The Met Police said in a statement: ‘We are aware of reports in the media concerning Sir Mo Farah.

‘No reports have been made to the MPS (the Metropolitan Police Service) at this time. 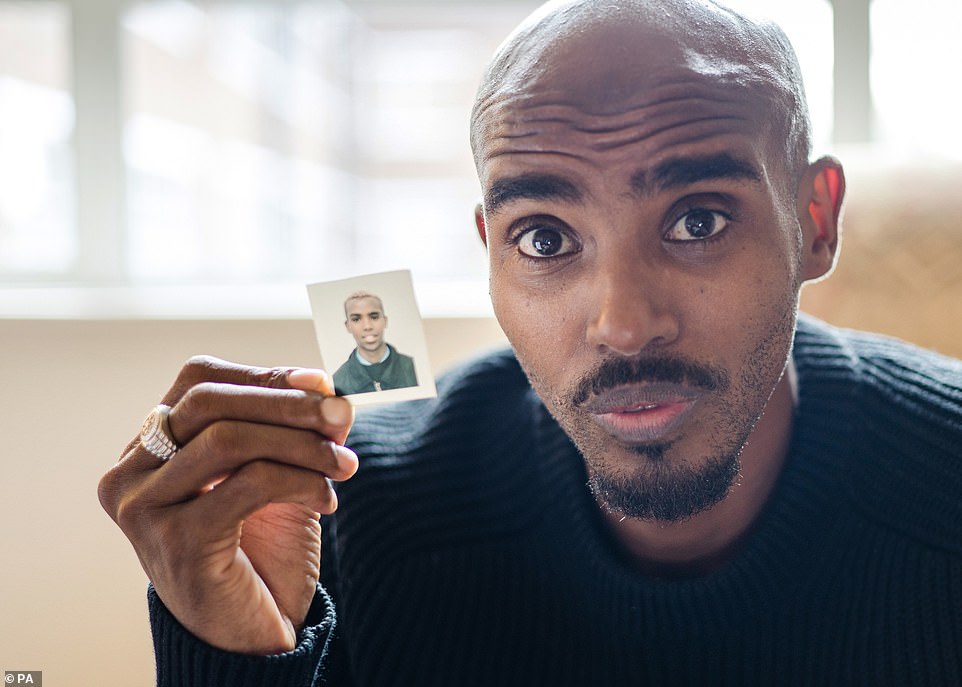 Sir Mo Farah holding up a picture of himself as a child during the filming of the BBC documentary The Real Mo Farah, which airs tonight 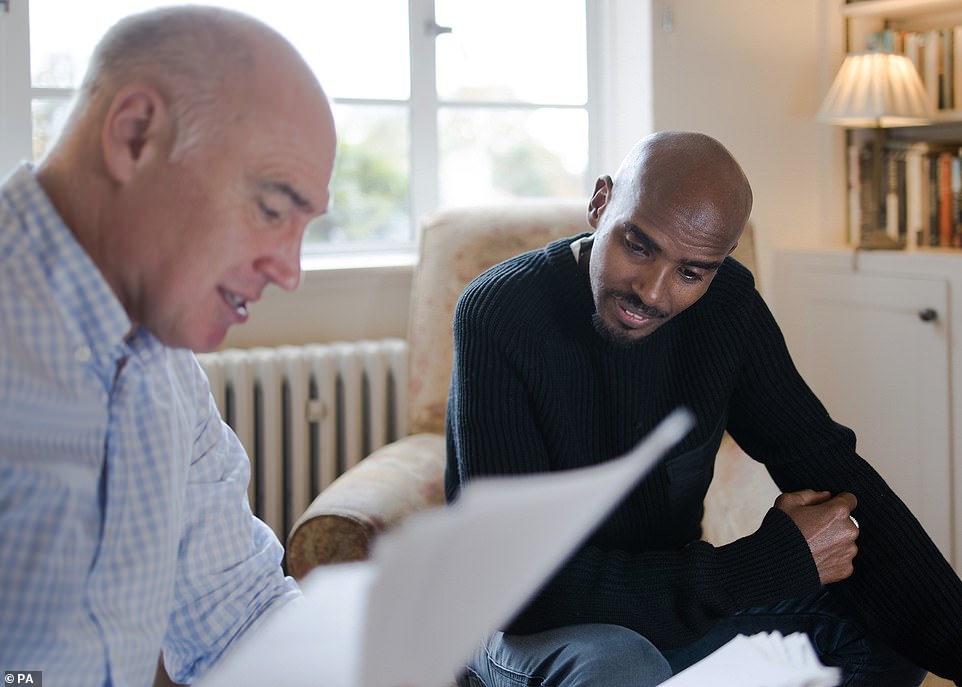 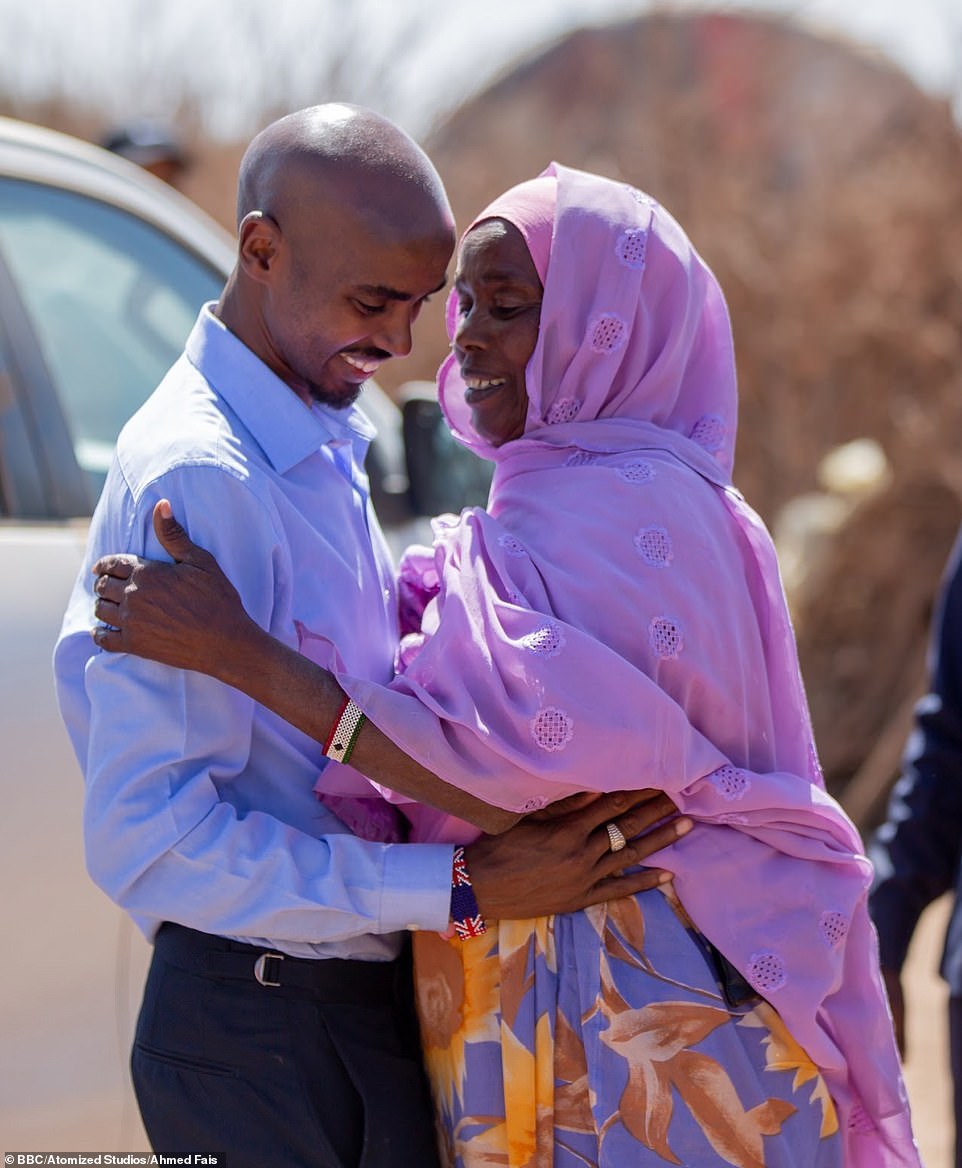 Mo Farah says he was trafficked into UK and spent years in domestic servitude. Pictured: Sir Mo with his mother Aisha during filming. She says she sent him away to relatives to save his life in the war – but never thought she’d see him again

Figures from the world of politics have praised Sir Mo as ‘truly inspirational’ and a ‘great Briton’ after he revealed he was trafficked into the UK as a child.

Tory leadership hopeful Nadhim Zahawi praised Sir Mo as a ‘truly inspirational’ role model after the revelations and reflected on his own experiences of ‘fleeing’ from Iraq as I child. Similarly, London Mayor Sadiq Khan tweeted his support for the Olympian.

‘Everything Sir Mo has survived proves he’s not only one of our greatest Olympians but a truly great Briton,’ he said.

Following the shock announcement, Sir Mo said he is ‘really proud’ of the documentary, which enabled him to ‘address and learn more’ about his past and his journey to Britain.

The Real Mo Farah will air at 6am on BBC iPlayer and 9pm on BBC One today. 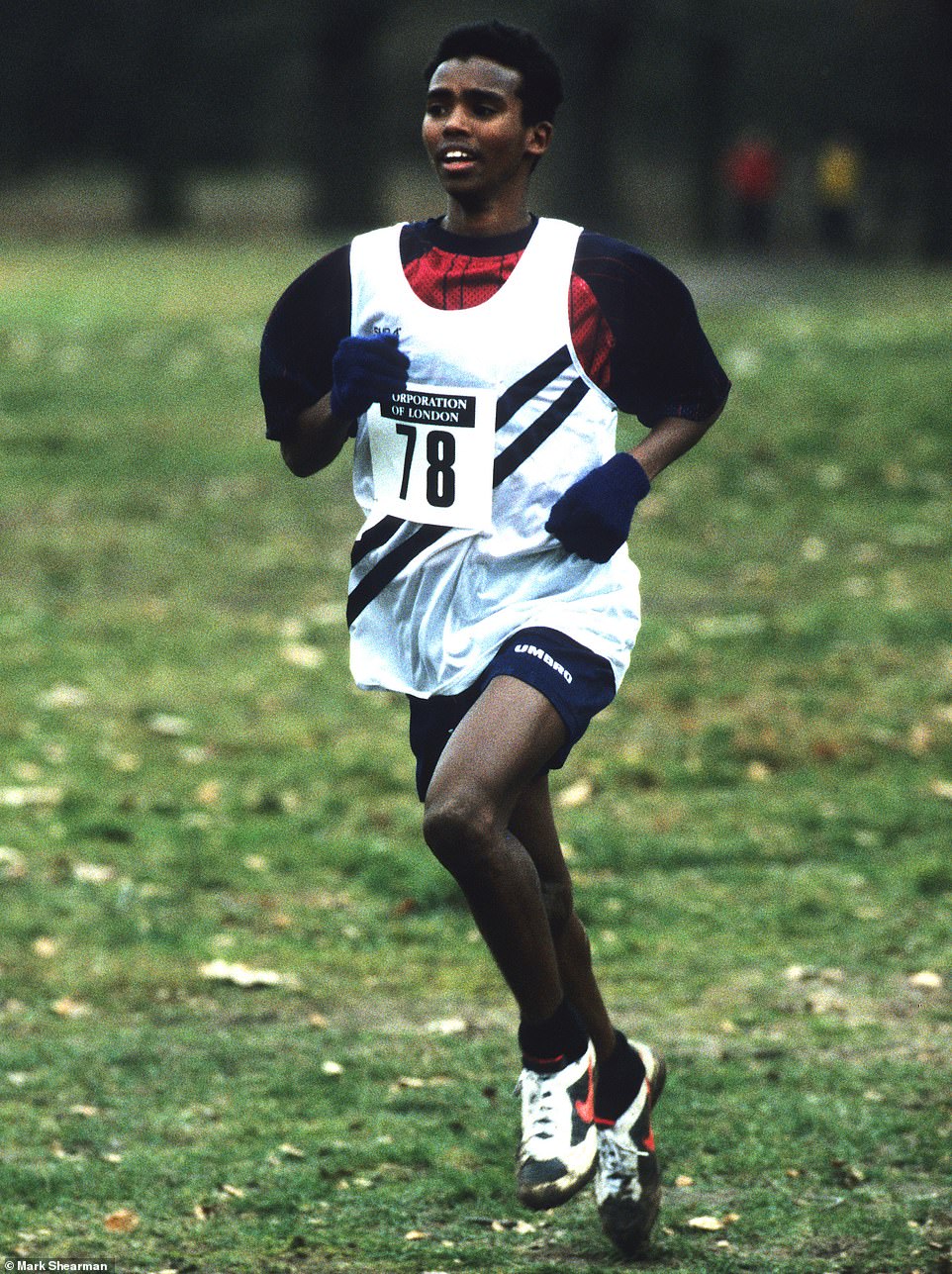 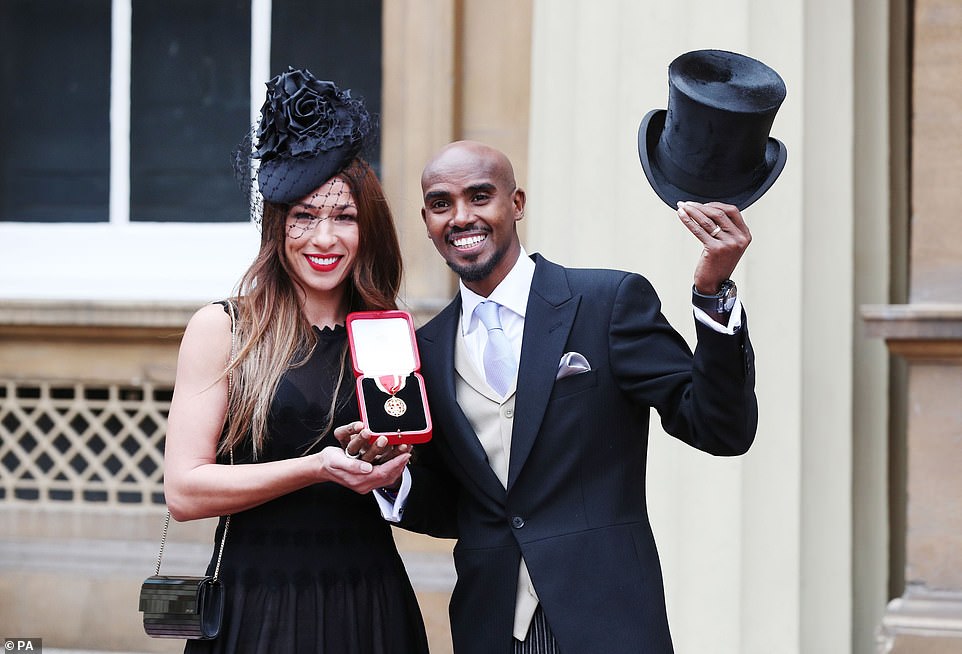 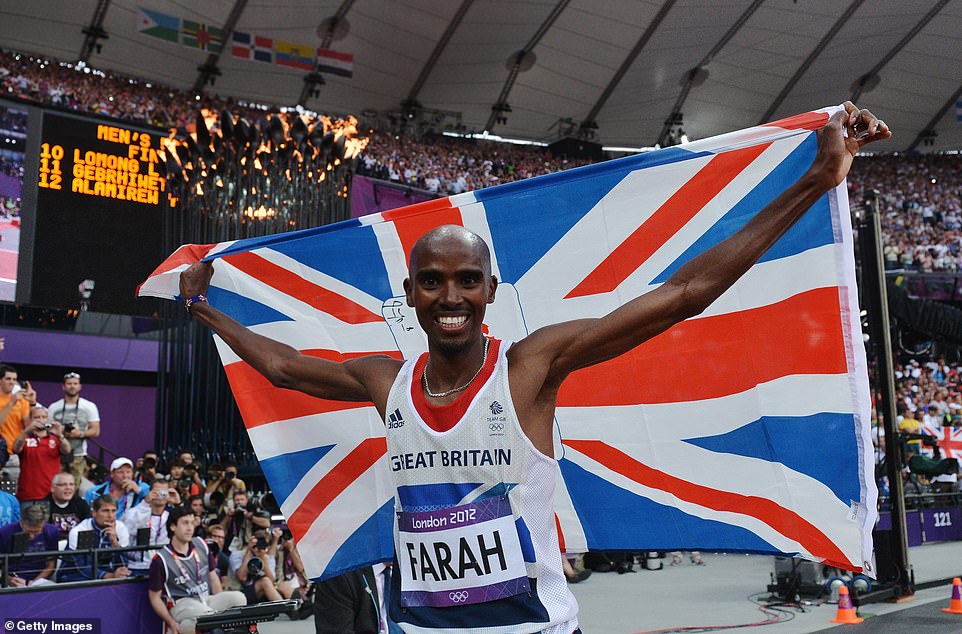 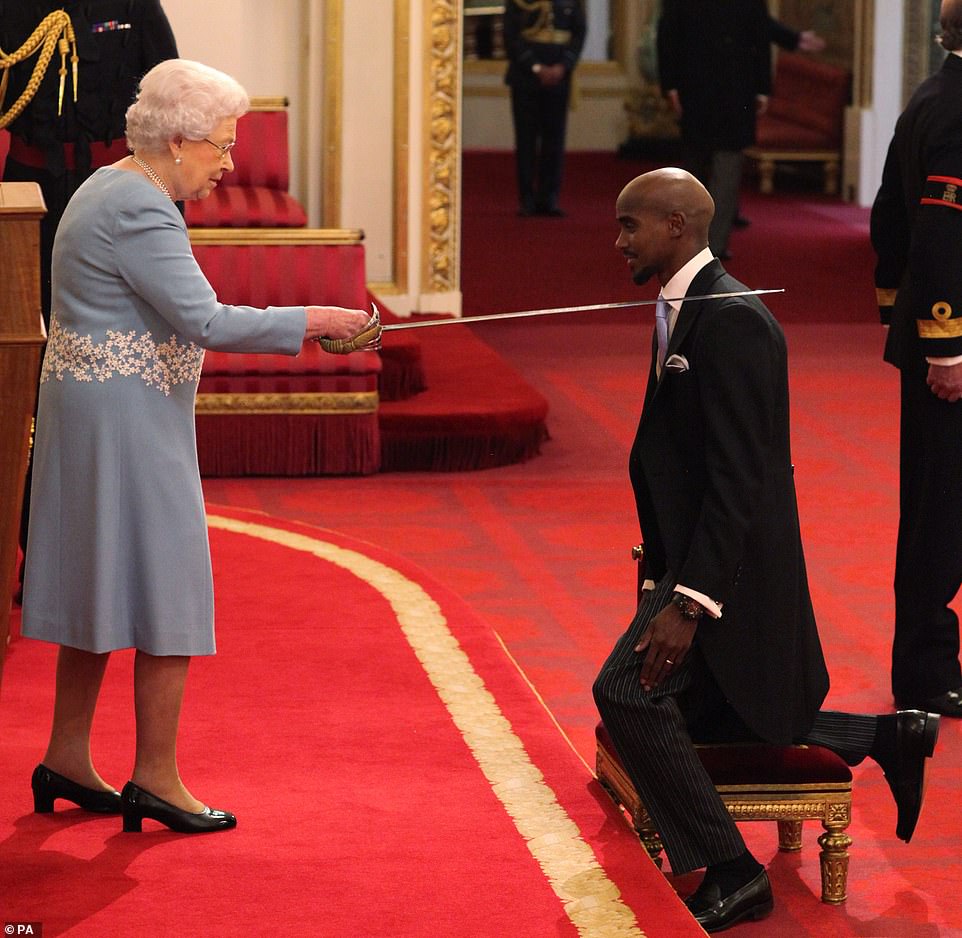 A timeline: Mo Farah reveals how he was trafficked into Britain from Somalia under another child’s name

1987: The family becomes torn apart when his father dies in the war when he is aged just four.  Separated from his mother, he and Hassan were sent to live with relatives – described as an aunt and uncle – in Djibouti in the Horn of Africa.

1993: He is smuggled into the UK as an illegal immigrant under a false passport bearing his new identity ‘Mo Farah’ – a name that had been stolen from another child.

1994: He is enrolled in a tough junior school in the predominantly white area of Feltham, west London, where his refusal to be cowed meant he was forever getting into fights.

After what is believed to be two to three years he confides in PE teacher Alan Watkinson, who alerts social services to his situation and he is subsequently placed into the care of another family.

He went to live with the aunt of the real Mohamed Farah, Kinsi, who had been told he was in the UK because all his family had died.

She said: ‘I tried to find out what is going on with you. The lady, she always make you do the housework, to have the kids, give them their milk, to change their nappy and all these things. What I know is she didn’t bring you as a human being, to help you, no. If I tell you the truth, this is not your fault. Your name is a gift to you, our gift to you.’ Her nephew is the real Mo Farah.

1997: Mo is selected to represent England at an international meet in Latvia. However, he does not hold the documentation to be able to travel for the event. Mr Watkinson then helps the then teenager apply for UK citizenship.

2017: The Olympic champion is knighted for services to athletics at a ceremony at Buckingham Palace he attends with wife Tania in November 2017.

2022: Sir Mo Farah has revealed in a BBC documentary that he was brought into the UK illegally under the name of another child.