These images show the bones of 27 lions slaughtered to be sold to the Far East for use in medicines or to be made into trinkets.

South African police swooped on a house after a tip-off that the 7,000 bones had been specially dried ready to be smuggled abroad.

The remains, made up of both lions and lionesses, are worth £4,500 each on the black market and are normally spirited out of the country on cargo flights.

Tory Peer Lord Ashcroft has long campaigned against the sickening trade and his in-depth investigations have shown over 3,000 farms in South Africa are involved in the trade. 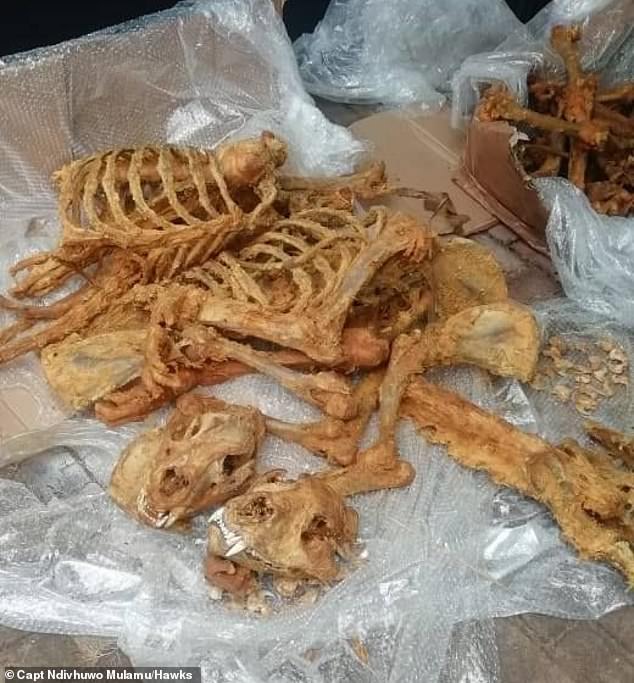 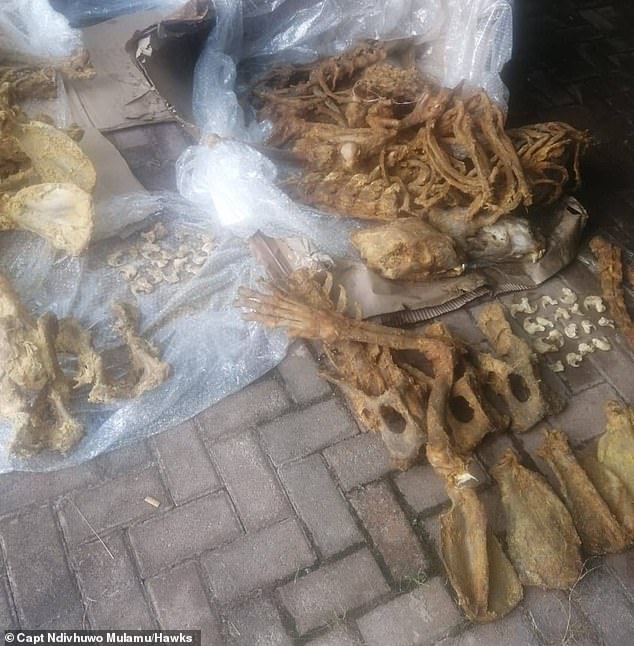 Officers swooped on the property after being told that as many as 7,000 bones from the predators had been specially dried ready to be smuggled abroad

Each year 800 lion skeletons can legally be sold and shipped abroad but that is not enough to feed the demand for the bones which are highly prized in China and the Far East.

A spokesman for the elite Hawks Serious and Organised Crimes Unit said that acting on a tip off they swooped on an address in Kempton Park, Krugersdorp near Johannesburg.

Hawks spokesperson Captain Ndivhuwo Mulamu said: ‘We have arrested a 37-year-old man who was at the address who will appear at Krugersdorp Magistrates Court on Monday morning.

‘The raid was at a private address in an intelligence led operation on Friday’ she said.

A source close to the investigation said: ‘It was very macabre indeed and we believe that at least 27 complete skeletons at least are there and the final figure may be even be a little higher. 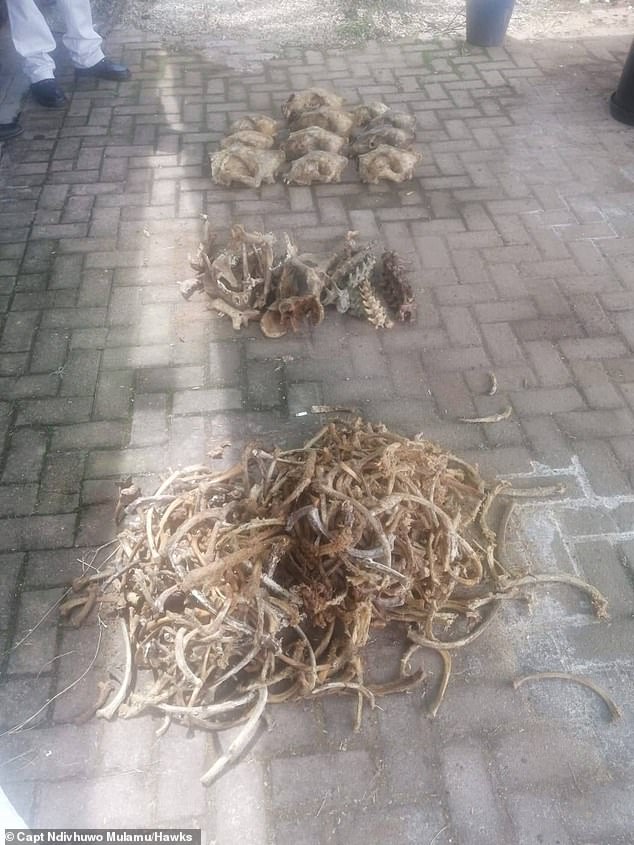 The remains, made up of both lion and lionesses, are worth £4,500 each on the black market and are normally spirited out of the country on cargo flights 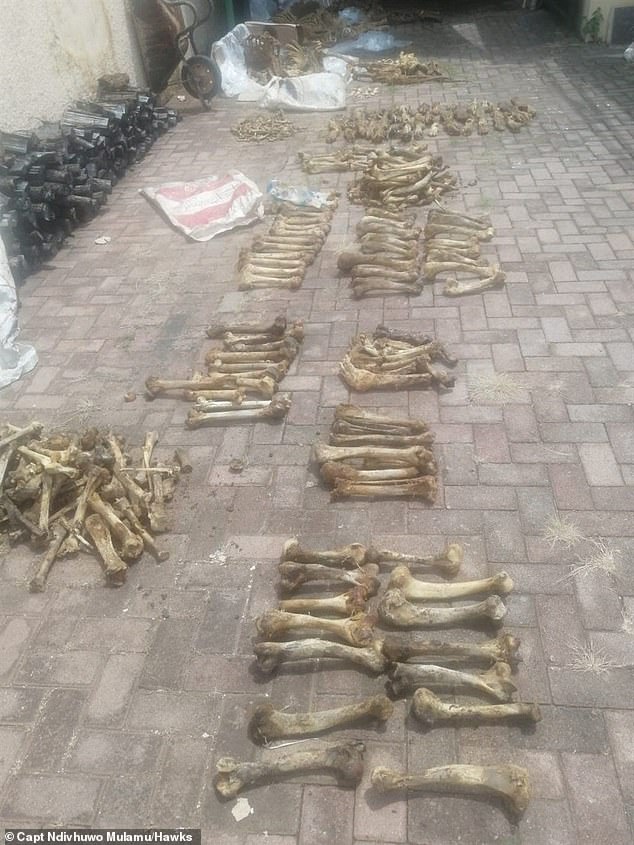 ‘This is clearly not one person working alone and is part of a much bigger and organised lion bone smuggling ring and we need to find the others and where the lions came from.

‘These lion bones would have a market value of about R2.5m (£125,00) but by the time they reach the Far East which was no doubt the intended market that figure rockets.

‘Lions are an endangered species with less than 20,000 left in the wild in Africa and with tigers whose bones are the most prized becoming so rare the lions are now being targeted.

‘This was a very good arrest and we hope it opens a lot of doors to enable us to track down the powerful players in this horrific trade and the killing of our lions for money’ he said.

Lions in the wild can live up to 15 years and grow up to 500lb in weight and grow up to 8ft in length and 4ft tall and are one of Africa’s deadliest predators.

Lord Ashcroft funded a two-year undercover mission Operation Simba in South Africa in 2018 and 2019 to expose the barbaric trade in lion bones and in ‘canned hunting’. 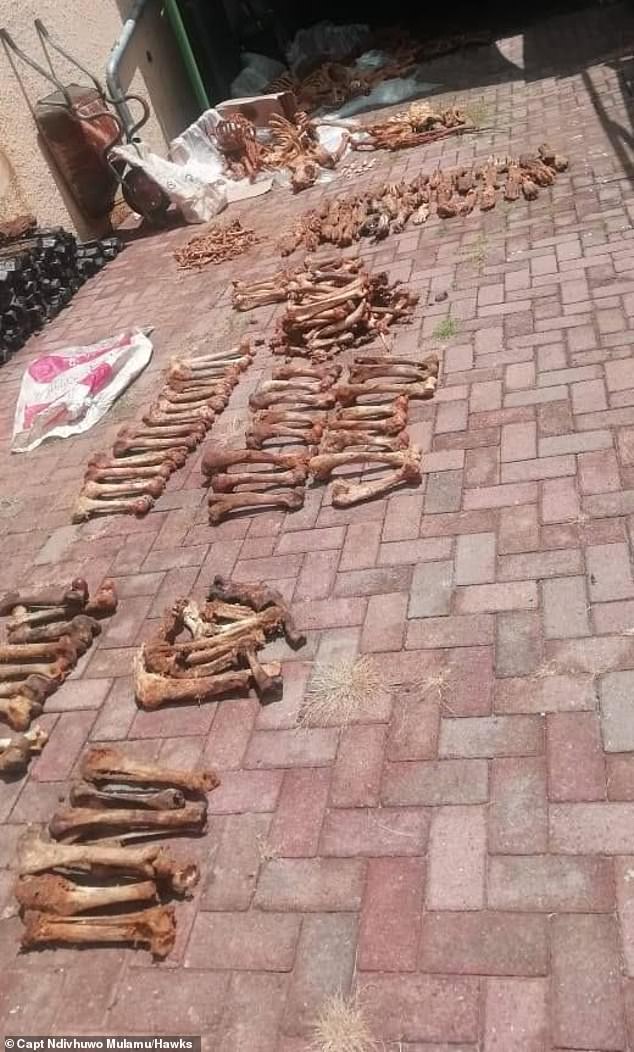 Following the raid, police said that they believe the property used to house the lion bones was part of a larger operation involving more people 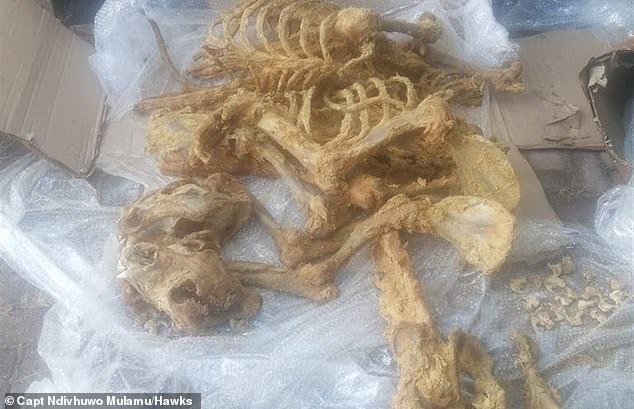 ‘Canned hunting’ is when lions are bred in captivity to be released into small enclosures so wealthy hunters can go in and shoot it dead as a ‘trophy’ and the bones are then sold.

He uncovered a wealth of evidence that captive lions are being bred just for their bones and accused the UK Govt of being complicit for refusing to ban the import of trophy skins.

A conservationist involved in exposing the trade in lion bones, who refused to be named on grounds of personal safety, claimed that the industry is far bigger than many animal experts believe.

She said: ‘Canned hunting where rich hunters used to pay extravagant amounts to kill lions with bows and arrows or crossbow bolts or shoot them dead is no longer the industry that it was.

‘It has become an embarrassment and social media is all over anyone caught doing it so what you had was about 3000 lion farms involved in this suddenly having a major loss of revenue.

‘But suddenly there was a huge interest in lion bones from the Far East now that tigers who were the traditional source for bones for medicines and traditional healing potions has nearly dried up. 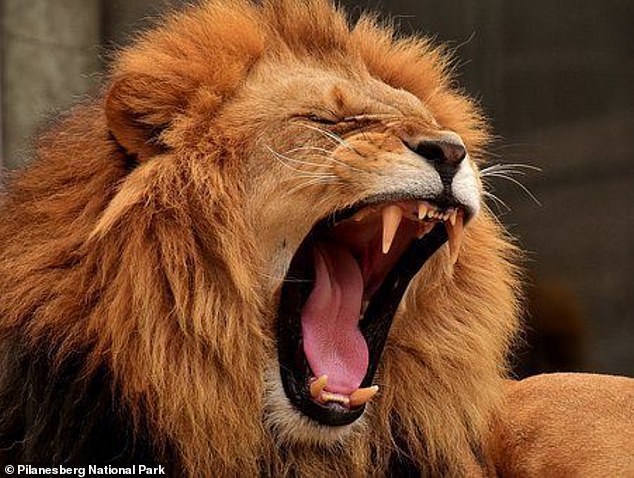 ‘Now they want the lion bones to replace the tiger bones and will pay big money for a lion skeleton and especially prized are the skulls and the teeth and the claws and the dried genitals.

‘We believe there are anywhere between 5000 and 12000 captive lions which were being bred as tame targets for rich hunters now being bred to feed a very lucrative market in their bones.

‘These poor beasts spend most of their lives until they reach maturity in cages and when they become adults they are killed and their bones dried and shipped out to the Far East to make potions’.

The National Society for the Protection of Cruelty to Animals in South Africa said: ‘We completed a comprehensive report into the cruelty behind the scenes of the captive lion and lion bone trade industry.

‘Lions are one of the most loved and iconic animals in the world and many have been reduced to becoming intensively bred farm animals and caged for human entertainment and then for the use of their bones.

‘The captive lion cycle is completed with the lion bone trade when captive lions are killed in order to export their skeletons to the Asia to supplement tiger bones used to make Tiger Bone Wine and Tiger Bone Cakes’.

They have called for urgent Government action to close down the trade.