Police are treating the disappearance of a four-year-old Carnarvon girl who went missing in the early hours of Saturday morning from a remote camp site in Western Australia as a possible abduction.

Mid-West Gascoyne Inspector Jon Munday said a sleeping bag from the tent Cleo Smith was staying in with her family had been reported missing but he was not at liberty to divulge what other items police believed might also have disappeared.

“We are gravely concerned for the safety of Cleo,” he said.

“We’re not leaving anything to chance. We are trying to cover all of our bases and we’re not ruling anything out.

“We have our best investigators up here at the moment, we have a full team of detectives up from Perth who are being assisted by Carnarvon and Geraldton detectives, we also have forensic officers up from Perth.” 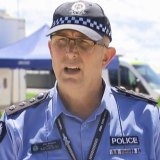 CCTV footage has been collected from nearby roadhouses and police are confident they are aware of any vehicles which would have been in the area since the young girl went missing.

Cleo was last seen in her family’s tent at 1.30am on Saturday at a remote camping near a site known as the Blowholes which is 75 kilometres north of her fishing and farming hometown in the Gascoyne region.

When her family woke up a few hours later at 6am she was gone.

The family – who had arrived on Friday for a weekend trip – sought help from other campers and immediately started searching for Cleo. By the time police arrived at the scene by mid-morning there were already motorbikes and personal drones combing the area.

The land search by SES volunteers spans an area that runs one kilometre north, one kilometre south, and 800 metres in-land from the camp.

Inspector Munday said he was confident that Cleo was not within the land search area, which includes rocky cliffs.

“There are some tables that we run off as a starting point in relation to lost person behaviour and the distances people can travel,” he said.

“We’re looking anywhere, a four to six-year-old, up to 5.2 kilometres from the last known position.

“As you can understand it’s a very big area … when you take into the context of the terrain and the landscape, a very formidable area for a four-year-old to walk, let alone for someone to search.”

The police officer, who gave a press conference on Sunday afternoon, said with the current conditions in the area a person would be expected to survive exposure to the elements.

Temperatures have been as high as 24 degrees and as low as 15 degrees at the closest weather station in Carnarvon during the time since Cleo went missing.

Inspector Munday said the family were devastated but had a close network supporting them.

Cleo’s mother Ellie posted a heartbreaking message on Sunday morning at about 1.45am saying how it had been 24 hours since she had last seen the sparkle in her little girl’s eyes.

“Please help me find her! If you hear or see anything at all please call the police,” she wrote in a Facebook post that has been shared more than 50,000 times.

Carnarvon Shire president Eddie Smith said the family were well-known locals of the town and the news had saddened the community which had joined the search for Cleo when it was realised at 6am on Saturday she was missing.

The Blowholes campsite is a popular location with Carnarvon residents for weekend and school holiday getaways, with great snorkelling only a short distance from the town.

The campsite itself is surrounded by sandy dunes, rocky terrain and shrub lands and includes a series of beach shacks mostly owned by Carnarvon families.

A shallow coral-filled lagoon called the Aquarium lies out in front of the campground where the surf breaks on the reef just off-shore.

Snorkelling is avoided at lower tides when coral can be damaged by swimmers.

The dangerous natural phenomenon of the Blowholes, a long stretch of short coastal cliffs pounded by waves and where jets of seawater shoot out through rock holes, is just one kilometre north of the camp.

The area is also prone to ‘king waves’ which are unexpected larger than normal waves which can appear without any warning signs.

Anyone with relevant information about the disappearance should pass it on immediately to police on 131 444.

The disappearance of Cleo comes after a young boy went missing more than a week ago in Western Australia’s Great Southern region at Fernhook Falls.

The boy has not been found.