The grieving son of a care home resident who died after falling ill with Covid is calling for families to be given to legal right to have cameras in their loved-ones’ rooms.

Tony Stowell, 54, was left in shock when he was suddenly told by care home staff his mother had been put on end-of-life treatment – despite her appearing healthy just days before.

Staff at the care home in Hull said they believed Antonia, 87, who was a long-term sufferer of dementia and diabetes, had fallen ill with Covid.

After receiving the devastating news, father-of-two Tony convinced staff to get his mother hospital treatment.

However, despite the best efforts of medical staff, she died in at Hull Royal infirmary a day later, in May 2020. Tests later confirmed she was positive for Covid.

Since then, Tony, who has worked as a professional model for brands including Adidas, has been campaigning for a change in care home legislation.

Named ‘Antonia’s Law’ – after his Spanish-born mother –  Tony hopes his campaign will allow families to remotely monitor their loved ones through a private camera.

The cameras will be installed in the private rooms of care home resident – at the request and expense of the families.

And staff will be permitted to switch off the devices when they are giving care – for their own privacy and to protect the dignity of the residents.

There is no suggestion of abuse or negligence in relation to the Antonia’s care.

However Tony believes the cameras will give family members of care home residents like him ‘peace of mind’. 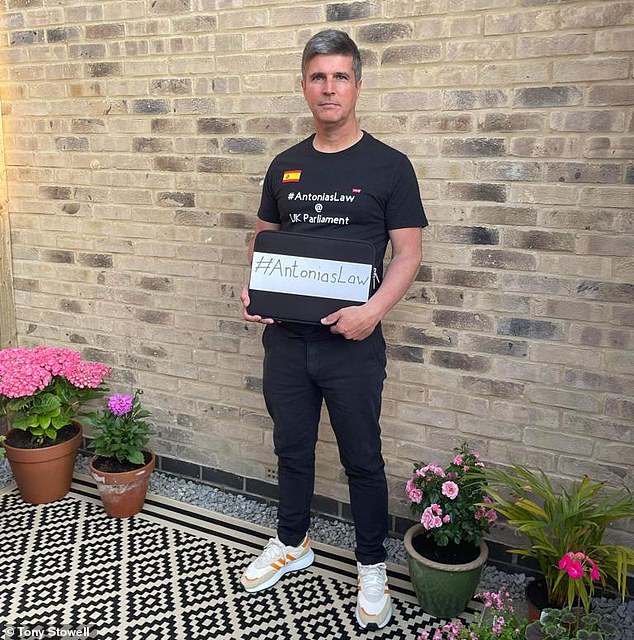 Tony Stowell (pictured), 54, was left in shock when he was suddenly told by care home staff his mother had been put on end-of-life treatment – despite her appearing healthy just days before 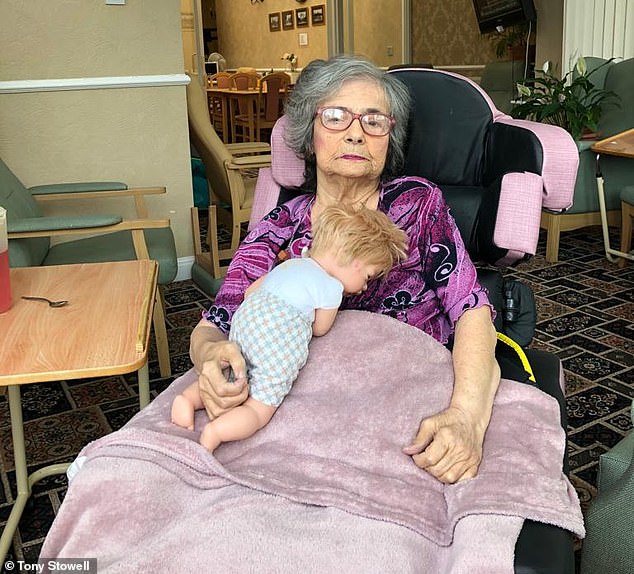 Staff at the care home in Hull said they believed Antonia (pictured), 87, who was a long-term sufferer of dementia and diabetes, had fallen ill with Covid 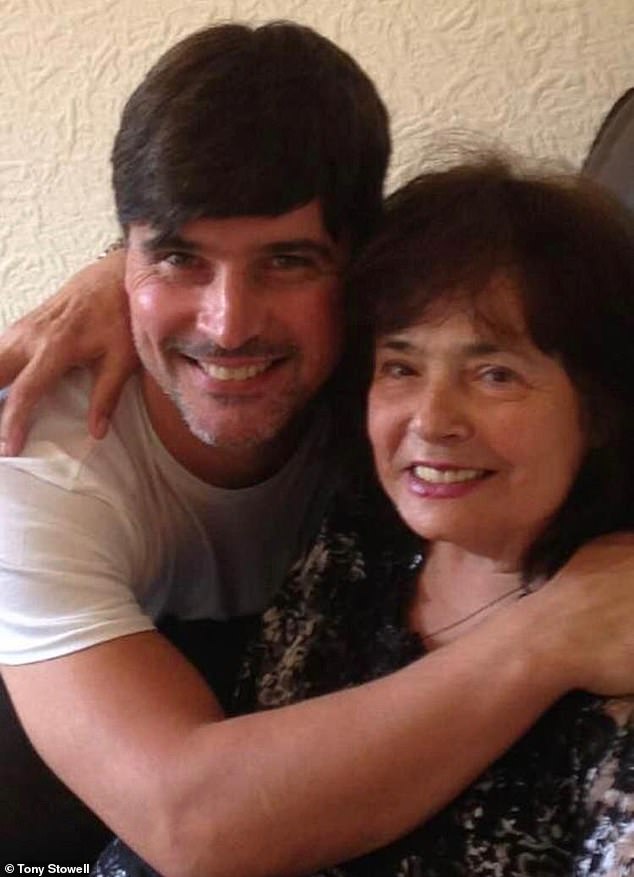 He also believes family members could spot early warning signs that their family members might be uncomfortable or ill and then inform staff members.

Can families have recording devices in their rooms?

Currently there is no legal right for families to have recording devices in the rooms of their care-home bound loved ones – hence Tony’s Antonia’s Law campaign.

But it can be done under guidance published by the Care Quality Commision – which regulates health and social care services in England – and with permission from the care home.

The CQC recommends seeking legal advice to help decide whether to use surveillance.

A statement on its website says: ‘It’s important to understand we cannot authorise you to carry out “intrusive covert surveillance”.

‘This means we cannot tell you to put hidden cameras or other recording equipment in someone’s bedroom.

‘This is because there’s a law that sets out when public bodies can use or authorise surveillance. It’s called the Regulation of Investigatory Powers Act (RIPA) 2000.’

However it adds: ‘You should only use recording equipment with the permission of the person whose care you are concerned about. It’s important they agree to the use of the technology. Just because somebody does not object to it does not mean they agree to it.

‘When you get their permission, it is a good idea to explain who you plan to share the recordings with and to write down what you have agreed.

‘If they are unable to give permission (for example, if they have dementia and cannot make these kinds of decisions) it is important that you feel sure that you are doing the right thing. In other words, acting in their best interests.’

Meanwhile, the Government says the CQC are reviewing and developing  guidance and a tool regarding the use of surveillance by providers – this is guidance that includes questions to determine if peoples’ human rights have been considered and respected when providers use CCTV and surveillance systems.

He told MailOnline: ‘This about giving family members and residents the choice to have a camera if they want it.

‘I knew my mum better than anybody and I believe could have spotted the signs that she was ill and raised the alarm.

‘Had Antonia’s Law been in place maybe it could have saved her.’

Antonia was born in Andalusia, in southern Spain, and having met Tony’s British Army father, who was based in Gibraltar, she later moved with him to England.

Having raised Tony and four other children, and having worked as a chef, she first moved into a care home in the East Riding area in 2012, having first showed early signs of dementia in 2010 during hospital visits.

In total, she was moved between six care homes, in which Tony said she suffered varying levels of care.

She was moved into the care home where she would later fall ill in 2018. Tony, who lives nearby in the East Riding area, would regularly visit his mother.

However, like millions of other Britons, Tony faced the anguish of watching his mother’s care home go into lockdown in 2020 due to the Covid pandemic.

‘It was awful because she didn’t understand. She could see me but I had to stay away.’

Tony says there was an outbreak of Covid at the home a few days before his mother fell ill – which saw residents confined to their rooms and temporary staff brought in to cover for those off sick.

He believes the outbreak came from the Government’s much-criticised policy of moving Covid patients from hospitals into care home – a move which earlier this year was found to be ‘unlawful’ during a judicial review.

He said: ‘A week before we were told she was end-of-life she was smiling and waving at me through the window. She didn’t seem that ill to me.

‘I phoned them, as I did every morning, and I was not aware whatsoever that my mother was poorly. I had know inclination my mum was ill.

‘They told me to call back in five minutes. The next thing, the care home manager called me back and she told me my mother is on end-of-life.

‘I was out walking my dog at the time and I fell to the floor – my legs just went. I couldn’t believe it. It was like I was in another world, because I had no inclination my mother was ill – it come like a bolt from nowhere.

‘From what I knew she was fine and then suddenly I’m told she’s on end of life. How could it happen so fast?’

Tony said that after he demanded his mother be given treatment, an ambulance was called and she was rushed to Hull Royal Infirmary. 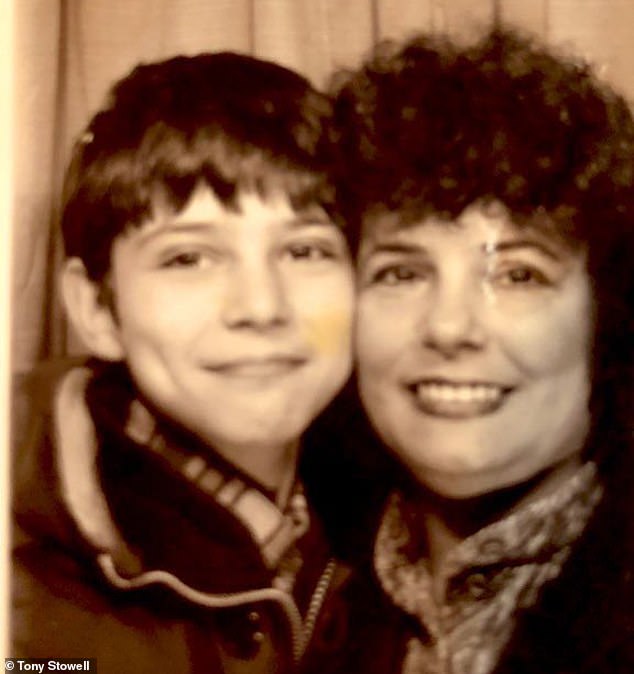 Antonia was born in Andalusia, in southern Spain, and having met Tony’s British Army father, who was based in Gibraltar, she later moved with him to England 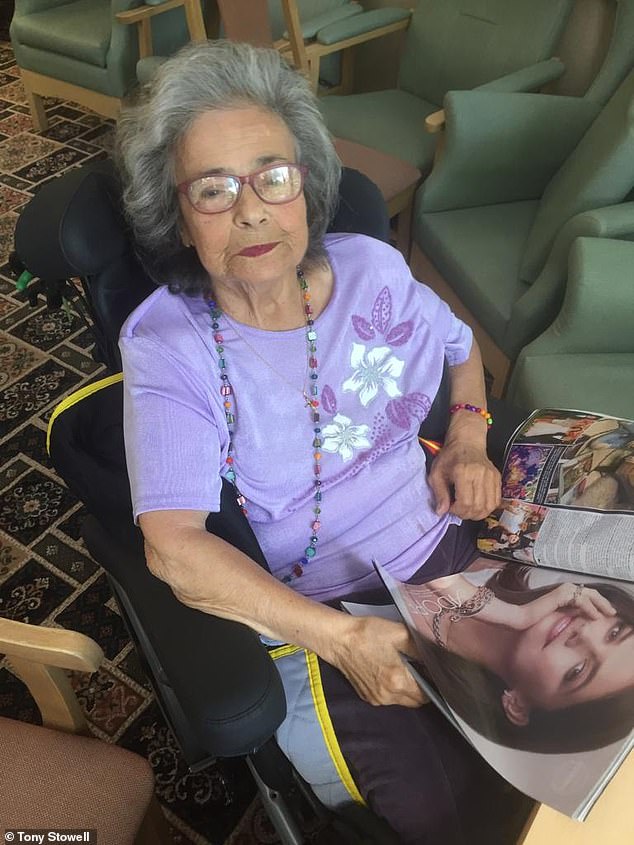 Having raised Tony, and worked as a chef, she first moved into a care home in the East Riding area in 2012, having first showed early signs of dementia in 2010 during hospital visits 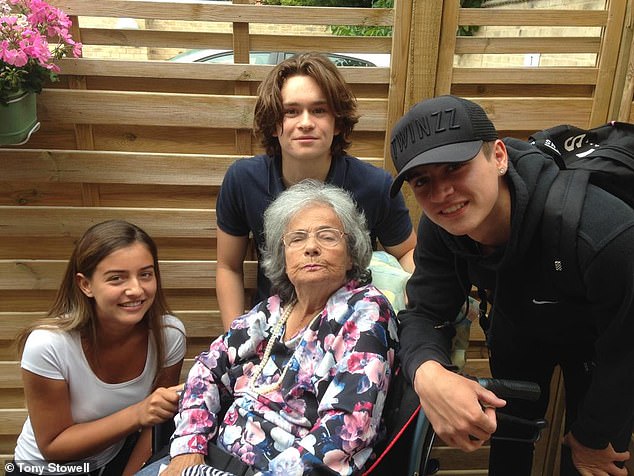 Like millions of other Britons, Tony faced the anguish of watching his mother’s care home go into lockdown in 2020 due to the Covid pandemic

She died a day later, having tested positive for Covid-19 at the hospital.

Tony said: ‘At one point, when she was in the hospital,  they said I could come in and see my mum. It was the first time I had been to physically touch my mum two months. It felt like a lifetime. And I gave her a big kiss and a cuddle and I cried.

‘She was the best mum in the world and for me I have to fight for her and for other people like me who have relatives in care homes.

‘That’s why I have named it Antonia’s Law – because it is in honour of my mother – but it is also for future care home residents and staff because they should be given the right to have cameras if they wish.

‘I believe it would give family members peace of mind and reassurance.’

Tony, who is being supported by Fadi Farhat of London-based GA Solicitors in his campaign, held talks with former Health Secretary Matt Hancock about his plan before the politician’s dramatic exit last year. 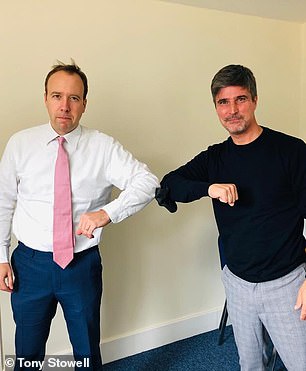 Tony, who is being supported by Fadi Farhat of London-based GA Solicitors in his campaign, held talks with former Health Secretary Matt Hancock about his plan before the politician’s dramatic exit last year

Tony and his legal team are planning legal action against the Department for Health and Social Care (DHSC) in regards to the handling of care home residents like his mother in Covid.

Mr Farhat, who is working pro-bono, said he believes such a change in law is possible.

Currently, care guidelines state that families can request CCTV if they wish. But there is no set in stone legal right.

Mr Farhat says legislation could be created to allow families or residents to opt for the cameras if they wish.

Family members with a Power of Attorney could chose a camera if their relative no longer had the capacity to consent themselves – while those without could apply to the Court of Protection.

Any privacy issues can be sorted by allowing staff to turn off the cameras when they provide care in the room, believes Mr Farhat.

And the data from the camera can be streamed directly to relatives or recorded on a device belonging to the family to avoid any potential GDPR issues.

One potential issue with the cameras could be an increase in workload on already-stretched care home staff facing an influx of calls by family members.

But Mr Farhat said: ‘We think the Government should look to start with a trial. If care home staff do see an increase in calls from family members then it can be adapted.’

Meanwhile, a Department of Health and Social Care spokesperson said: ‘Abuse of any kind – especially against vulnerable people in care – is abhorrent and we’re determined to stop it.

‘Tougher inspections aim to ensure abuse is caught and dealt with, and the government has made sure that across the country, the police, councils and NHS are working together to help protect vulnerable adults from abuse or other types of exploitation.

‘The Care Quality Commission has published clear guidance on using surveillance in care settings, which states this must consider the privacy and dignity of those it seeks to record.’