A panel of two judges and a lawyer sent shock waves through the government on Wednesday when they recommended an impeachment committee investigate whether Ramaphosa committed misconduct in an incident involving a large sum of money hidden in a couch that was later stolen. 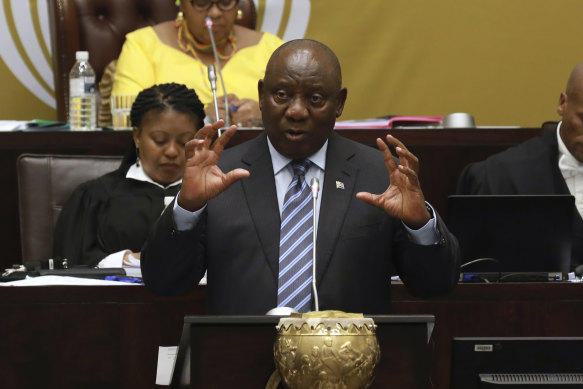 Ramaphosa said in response, “I categorically deny that I have violated this oath in any way, and I similarly deny that I am guilty of any of the allegations made against me.”

It is unclear whether he will face criminal charges. If he were to step down, it would deepen the divisions within the already struggling ruling party, the African National Congress.

Memories of the party’s glory days – when it led the liberation struggle against apartheid – have faded for many voters after decades of scandals and mismanagement. Many commentators are predicting Ramaphosa’s troubles could hasten the end of the ANC’s long domination of national politics. The party has controlled one of Africa’s wealthiest and most influential nations since the end of apartheid in 1994.

Ramaphosa was one of Mandela’s chief aides – he held the microphone when Mandela made his first public speech after his release from prison. He was Mandela’s lead negotiator with the White-led government in the run-up to the 1994 elections and later chaired the commission that wrote the new constitution. 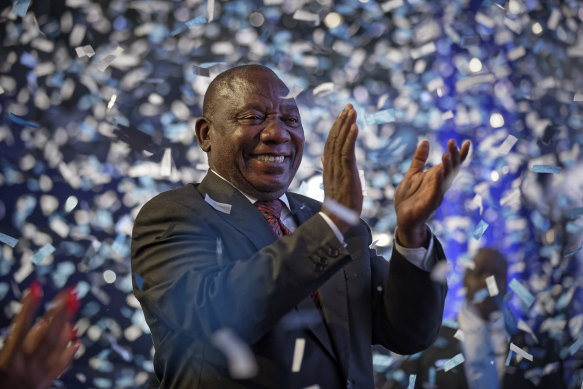 President Cyril Ramaphosa is more popular than the rest of the ruling ANC Party.Credit:AP

Despite his prominence, however, Mandela did not appoint Ramaphosa as his deputy. Instead, the former labour organiser went on to become a successful businessman.

His ascent to the presidency and announcement of an anti-corruption drive sparked widespread relief – dubbed “Ramaphoria” – after the systematic looting of state-owned companies and attempts to dismantle the criminal justice system that led his predecessor, Jacob Zuma, to resign. Ramaphosa’s narrow victory in the 2017 party leadership conference quashed Zuma’s plan to have his ex-wife succeed him, but Zuma still commands loyalty from a powerful ANC faction.

Ramaphosa “is seen as a man of integrity in a party tainted by years of corruption scandals and mismanagement,” said Pauline Bax, the deputy director of the Africa program at the International Crisis Group think tank. “This will deepen divisions at a time when there’s no clear successor.”

Ramaphosa consistently scores as more popular than the ANC in opinion polls and was widely viewed as the party’s best chance to arrest a sharp decline in its electoral support, which sank below 50 per cent in last year’s municipal elections for the first time since the country’s first all-race elections, in 1994.

Justice Malala, a prominent political commentator, said the nation is undergoing a second major political transition as voters desert the ANC. Ramaphosa’s key weakness has been not facing up to that reality, he said.

“Cyril rejoined the ANC knowing what it had become,” he said, adding, “He tried to give his colleagues some dignity and not send them to jail, and they saw that as weakness.”

“This case is all about getting rid of him and stopping his reform agenda,” Malala said. “The ANC may have some good people, but it is so eaten up – consumed – by greed and corruption and infighting that it is incapable of renewing itself. . . . It is in its death throes.”

The ANC leadership conference is scheduled for this month, and Ramaphosa had seemed assured of a landslide victory after securing just over half the votes from ANC party branches. Whoever wins will represent the ANC in the next election.

His main challenger, former health minister Zweli Mkhize, trailed him with nearly a quarter of votes. Mkhize resigned last year after he was implicated in a corruption scandal over coronavirus-related contracts that were awarded to a communications company controlled by former associates, but he has not been charged.

University of South Africa political analyst Lesiba Teffo said the ANC probably knows it will suffer severe losses at the polls in 2024 without Ramaphosa.

“Even his detractors know they need him for the next election,” Teffo said. “The ANC knows that if they recall him, it will damage the country and weaken the ANC more in the elections. It is a political conundrum for the ANC. He still has a lot of credibility and support despite the mistakes he has made.”

The current political turmoil goes back to a long-running inquiry into a murky theft of cash from Ramaphosa’s Phala Phala farm. He said the money, which was hidden in a sofa, was from the sale of buffaloes to a Sudanese businessman in 2019.

But the panel led by former chief justice Sandile Ngcobo threw doubt over that explanation, asking why a foreigner would carry half a million dollars of cash into South Africa, visit the farm on Christmas Day with no prior arrangement, pay cash and then leave without ever claiming the buffaloes.

The panel also asked why the cash had been left there for 40 days rather than put in a bank and why no one was able to provide contact details or identification documents for the Sudanese businessman, who has not been in contact for the past 21/2 years. The theft – and that Ramaphosa allegedly did not report it to the police – raised questions about whether the money was improperly acquired, the panel said.

Ramaphosa maintained that he did report the theft to authorities since he told the head of his protection unit, Major General Wally Rhoode, who is with the police. But the report said that was not sufficient, noting the incident became public only after a former spy chief allied with Ramaphosa’s rival Zuma announced he had filed charges against the president and others over the case, sparking a media storm.

The political turbulence comes as South Africa is battling low economic growth, massive rolling power blackouts, high unemployment and rampant crime. The South African rand has fallen 4 percent against the dollar since the report was issued Wednesday, according to Bloomberg data, amid uncertainty over the country’s leadership and the future of economic restructuring.