Follow
Home » World News » Southern California is now a mosquito zone. Here's how to defend yourself 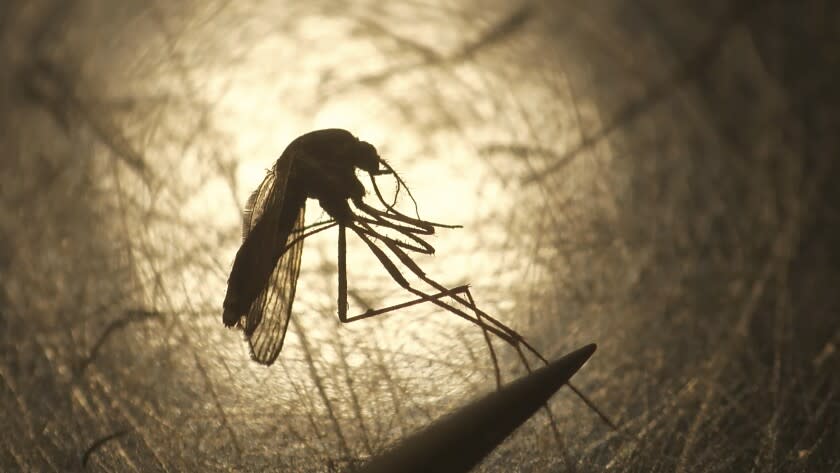 Summer is here and so are the mosquitoes in your backyard, waiting to nibble at your ankles. And elbows. And earlobes.

Like most blood-feeding insects, mosquitoes are attracted to humans from a distance by the carbon dioxide we exhale, said Daniel Markowski, the AMCA’s technical advisor. Once they get close, they use a variety of other cues, such as shapes, sizes and colors, to home in on their hosts.

The Times asked experts how to keep the flying leeches away, what to do when you’ve been bitten and why some people attract mosquitoes more than others. Here’s what they said.

According to the AMCA, there are 30 types of mosquitoes within the United States. While there are differences among them — for example, some feed during the day and others at night — they share a life cycle that is dependent on water.

Markowski said we’re all familiar with the adult female mosquito buzzing in our ear and biting our arms. “But after she bites and develops an egg batch, female mosquitoes need a place with or near standing water to lay her eggs,” he said.

Standing water left untouched for at least seven days is a magnet for mosquitoes. Typical sites include birdbaths, old tires and clogged gutters.

“Because mosquito larvae feed on decaying organic matter and other microorganisms, the water must be stagnant and contain some organic matter such as leaves, soil or grass clippings to support mosquito development,” Markowski said.

You can eliminate these breeding sites by draining or dumping the water, then blocking more from collecting there — for example, by turning over a bucket or covering the grill. Do this at least once a week.

“Dark colors are not recommended in prime skeeter habitats because they stand out more, particularly in regards to background and contrasts,” he said.

We exude other chemical cues too, Markowski said, including breath odors, bacteria on our skin and other aromas produced by humans.

“We are all different, and these different combinations are more or less attractive to different mosquito species,” Markowski said.

He said some studies have shown that certain blood types may be especially attractive to some species of mosquitoes. “I would surmise that the combination above, along with the blood type, is really what makes one person more attractive to a mosquito than others,” he said.

Your diet may also play a role in whether you get snacked on. Consuming foods such as bananas, avocados and grapes have shown to increase host-seeking by some mosquito species, but Markowski speculated that an individual’s metabolism is a bigger factor than the specific foods eaten.

The Greater Los Angeles County Vector District says one thing to do to prevent mosquito bites is to apply insect repellent with one of these active ingredients: DEET, picaridin, IR3535 (the trade name for ethyl butylacetylaminopropionate) or oil of lemon eucalyptus.

As with all products, Markowski said, it’s a good idea to treat a small area on the body first to ensure you don’t have an allergic reaction before applying the repellent broadly. Read the product label and follow all the usage guidelines.

The Centers for Disease Control and Prevention advises against spraying repellent under your clothing. It also suggests that if you’re using sunscreen, apply sunscreen first and insect repellent second.

The U.S. Environmental Protection Agency, meanwhile, has an online tool that helps you figure out what repellent would work best for you.

An alternative to chemical-based sprays or creams are ones with plant-based ingredients such as citronella, lavender and peppermint. Markowski said these ingredients are less effective than their synthetic counterparts, they can work for you if mosquitoes don’t find you powerfully attractive.

You can also try to make the outdoor area you’ll be hanging out in inhospitable to mosquitoes by setting up several tiki torches or other devices that diffuse repellent. But the efficacy of diffusers can vary according to the species of mosquito. Try them one at a time until you find an approach that works best for you.

Certain plants can offer some level of protection to your patio too. These include citronella and a few other geranium varieties, marigolds, lemongrass, catnip, certain types of mint, lavender, and lantana. There are also common aromatic herbs that have limited ability to drive off mosquitoes, such as rosemary, garlic, basil, thyme and fennel. No, you do not have to wear the garlic around your neck.

If mosquitoes manage to bite you despite all these precautions, don’t scratch! Markowski said scratching can cause secondary infection and prolong the irritation. In extreme cases, people can scar themselves.

A anti-itch cream is typically all you’ll need to alleviate the discomfort. If you’re highly allergic to mosquitoes, he said, you may need a cream with Benadryl or similar antihistamine.