Student writes letter to school over 'culture of misogyny and bigotry'

‘It’s a hotbed of sexual violence’: Female student writes open letter to head of £20,000-a-year Kings College School over ‘culture of misogyny and bigotry’ as she accuses male pupils of sexual assault and harassment against girls

A female student today accused a prestigious £20,000-a-year school of having a ‘systemic’, ‘deep-rooted’ and ‘poisonous culture of misogyny’ and alleged that male pupils sexually assaulted and harassed girls.

The author, a former Wimbledon High School pupil called Ava Vakil, invited girls to share their experience of ‘sexual violence or harassment’ from students at King’s.

In her letter to headmaster Andrew Hall, Ms Vakil accuses male pupils of violent and drunken sexual assaults, telling rape jokes and threatening rape, and circulating nude photos of girls without their knowledge in group chats.

The letter also cites instances of alleged ‘racial and homophobic abuse’, including the use of the n-word, anti-Semitism, ‘slurs and much more’.

And teachers are accused of ‘ignoring the problem’ of misogyny and blame female pupils for ‘trying to distract the boys with short skirts’.

Ms Vakil calls on Mr Hall to ‘publicly admit the extent of this problem’ and improve safeguarding by supporting the ‘speaking out of harassment and abuse’.

The letter also demands ‘regular and focused PSHE’ focussing on ‘consent, relationships, misogyny and abuse’, ‘mandatory counselling’, and ‘strict and clear protocol for how these situations will be dealt with’.

A spokesperson ‘absolutely refutes’ the suggestion the school is a ‘hotbed of sexual violence’ or has ‘a deep-rooted and poisonous culture of misogyny’.

King’s has been voted one of the top schools in London by the Sunday Times and was called ‘an inspiring place to be’ by the Good Schools Guide. Its former pupils include actor Ben Barnes and musician Marcus Mumford. 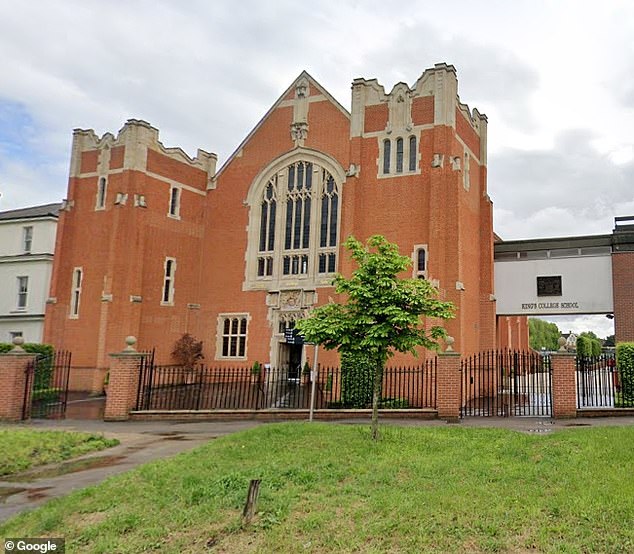 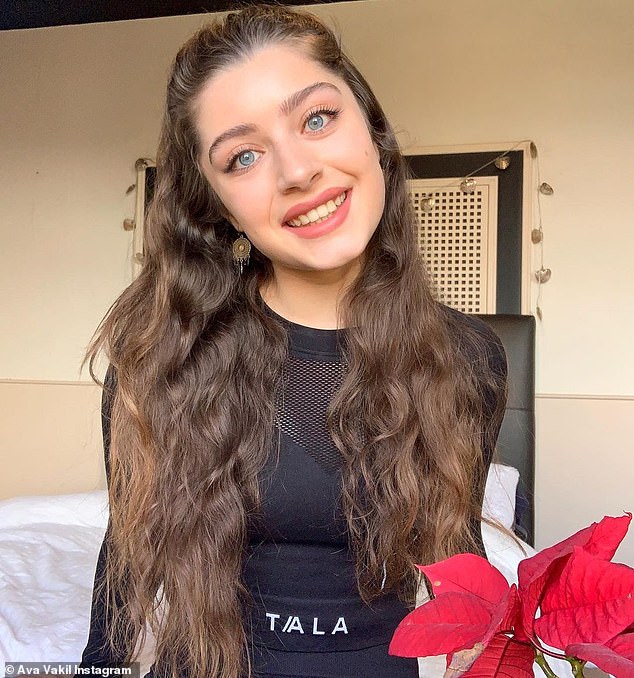 The author, a former Wimbledon High School pupil called Ava Vakil, invited girls to share their experience of ‘sexual violence or harassment from students’ at King’s

The letter lists a number of bombshell allegations against pupils at King’s. Here are just some of them:

– ‘they made a ‘tier list’ which rated girls in a tier from 1-8, The first tier being if you pulled them at the upcoming party you’d score the highest and the 8th tier being, in their eyes ‘shocking’

– ‘a lot of the time when I was able to listen into their conversation they were freely discussing women, degrading them and objectifying them’

– ‘Boys there would call girls awful things in a normal setting i.e. pass me the lighter or [you’re] a s**t and a c**t’

– ‘countless boys have begged and tried to pressure me for nudes and provocative photos, making me feel uncomfortable and I think they knew that’

– ‘In year 10 when a group of them cornered me, unzipped my top and groped me at a house party and played it off as if I was over reacting for being upset’

– ‘At a party he tried to get with me and I rejected him But he put his hand up my dress and I could [not] inch backwards [as] I was up against a wall. I was clearly uncomfortable but he didn’t stop’

It comes as Policing Minister Kit Malthouse suggested that showing respect for women and girls should be taught to boys in the classroom, following a national outcry about sexism in society fuels violence against women.

In her letter, Ms Vakil says the allegations left her ‘both heartbroken and enraged’, and said many of the incidents described to her are ‘criminal’.

She argues that King’s ‘cannot attempt to unravel its misogyny without first properly acknowledging it’, writing: ‘It is no secret amongst local schools that King’s has a problem. King’s has a cultural problem of misogyny and bigotry which leads to (and has led to) sexual harassment and sexual violence.’

The 11-page letter describes alleged behaviour including King’s pupils making ‘a ‘tier list’ which rated girls in a tier from 1-8′, competing to be the first to ‘get with/sleep with particular girls’, and a ‘culture of talking about us, rating’.

King’s pupils were also accused of catcalling and verbal abuse, including wolf-whistling and being called ‘s**g’, ‘s**t’ and ‘w****’.

The letter also describes alleged drunken sexual abuse, with anonymous victims describing being ‘taken advantage of’ and being ‘preyed on’ at parties.

Ms Vakil records ‘multiple instances of photos of girls (not only nudes) ending up online and in group chats without their consent, and then resultant harassment’, including ‘repeatedly being harassed for nudes and being called frigid’ when the female students refused to send any.

The letter also documents alleged violent sexual behaviour, rape jokes and threats, and describes what it calls ‘multiple accounts of boys assaulting girls at parties whilst they were unconscious, including raping them’.

Addressing Mr Hall, Ms Vakil says: ‘The label of a ‘King’s boy’ is one which has come to mean a privileged, usually white, usually wealthy boy who engages in derogatory behaviour towards women.

‘I speak in these crude categories because they are relevant. I want to be clear: not every student of King’s, nor every male-identifying student of King’s is part of this problem, but that does not mean the problem does not exist.

‘Misogyny and sexual violence is clearly a worldwide issue, but I would like to explain why I feel as though your school needs to tackle it as a particularly internal one as well. Kings is a hotbed of sexual violence.

‘I understand that as a Headmaster of this school this is the absolute last thing that you would want to hear or acknowledge, but I firmly believe that until this fact is accepted, the problem will never be proportionately tackled.

‘KCS cannot attempt to unravel its misogyny without first properly acknowledging it.

‘I have read your recent email to parents of KCS, and whilst you address the wider issue of misogyny as a whole, along with how King’s currently attempts to instil good values into its students from a young age, you still ultimately misjudge the situation and refuse to acknowledge that King’s College School itself has a problem.

‘When the pupils of your school are so overwhelmingly engaged in misogynistic behaviour, the response cannot purely be that of well-meaning talks and videos in PSHE. The response must be both corrective and pre-emptive, as I will detail in the latter part of my letter.

‘I recently posted an Instagram story asking for people who have experienced sexual violence or harassment from students of King’s College School to share with me what they have gone through, and I have compiled them in an attempt to demonstrate just how widespread this problem is.

‘Many of these examples are criminal, all of them are important. And if King’s College School refuses to publicly admit the extent of this problem, then sir, you do not display a proper attempt to address it.’

In a statement to MailOnline, a spokesperson for King’s College School said: ‘Testimonies published recently via the website Everyone’s Invited and social media of peer-on-peer sexual harassment and abuse by students and alumni at schools and universities across the UK make harrowing reading.

‘We admire the courage of those who have bravely spoken out. It is clear that the sexism, misogyny, sexual harassment, abuse and toxic or coercive behaviours detailed in these accounts are critical issues for every school, university and community to address.

‘We have been deeply saddened to read accounts of very serious alleged behaviours by King’s pupils (published in an open letter online), which are expressly at odds with the culture and ethos of our school.

‘We take any disclosures reported to us very seriously, following our processes to investigate the matter, and refer it to the relevant authorities and agencies. We are supporting anyone who comes forward to us.

‘At King’s we want every single pupil to feel safe and supported, to understand the importance of these issues and behave in a way that is worthy of them.

‘It is important that we listen, that we understand the experiences of pupils, and that we help them navigate adolescence with understanding, kindness and support.

‘Since the publication of the open letter, we have been contacted by many current and former pupils and parents, to say that they do not recognise the descriptions of the school’s culture and that they recognise our commitment to safeguarding and educating our pupils on such matters.

‘However, we are very far from complacent and see that from the troubling testimonies of girls and women who have come forward there is clearly more work we can and will do.

‘We are engaging with pupils, staff, parents, former pupils and others to gain their insights, address their concerns and review and improve our approach in the light of the issues raised.

‘Meanwhile, all present and former pupils have been given details of the appropriate contacts within the school and external agencies who they can contact should they wish to speak to someone or need support.’

letter, schoo, student, to, writes
You may also like: