Supporters of Jeremy Corbyn donate towards £100,000 legal fees in libel case later settled out of court, as charity promises to pay lawyers’ bills ‘if he is sued for defamation standing up for the values to which he has devoted his life’

Supporters of former Labour Party leader Jeremy Corbyn provided funds to pay off a huge legal bill that arose from a libel case, it has been revealed.

Their donations paid off eye-watering lawyers’ fees of around £100,000 which Corbyn ran up as he prepared to fight a libel action — even though the case was eventually settled out of court.

The company was established to pay Corbyn’s legal cost ‘if and when he is sued for defamation as a result of standing up for the values and beliefs to which he has devoted his life’, explained one of its directors.

Earlier this month, Corbyn was spotted among the crowds at King’s Cross Station supporting rail strikers from the RMT. 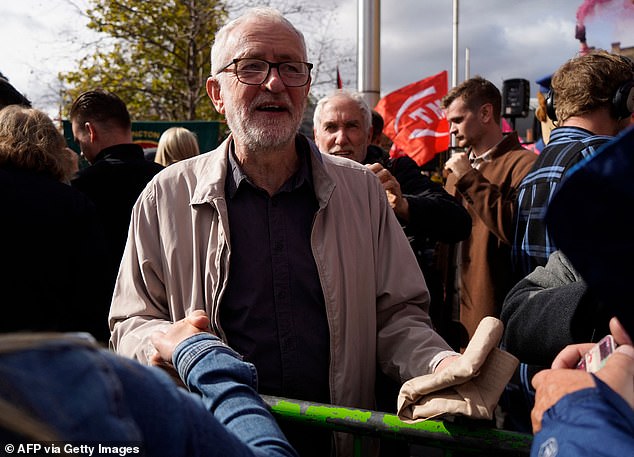 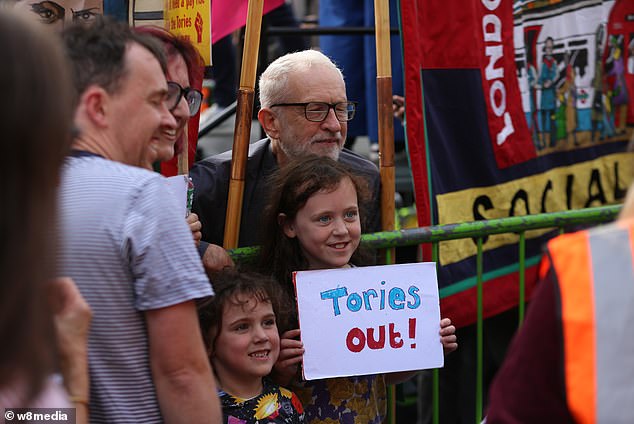 Jeremy Corbyn poses with children at a protest in central London as a girl holds up a sign reading: ‘Tories out!’

Corbyn’s Peace and Justice Project group joined the action as part of the ‘Enough is Enough’ campaign, which also saw a demonstration from eco-group Just Stop Oil.

The Islington North MP said: ‘Record breaking weather is happening everywhere and everything is too expensive. That’s the crisis. You can’t separate out the cost of living and climate crises. The whole system, which creates billionaires and starves hundreds of millions, is the crisis. It can’t be resolved, it must be overcome and transformed.’

Corbyn, 73, led the Labour Party for nearly five years and was elected by members with over 50 per cent of the vote in September 2015.

He defied expectations in Theresa May’s snap General Election in 2017 by stripping the Conservatives of their majority but was badly beaten by Boris Johnson in the 2019 vote – which saw Labour lose 60 seats.

Corbyn stood down as leader of the opposition in May 2020 and was succeeded by Sir Keir Starmer after a selection by members. 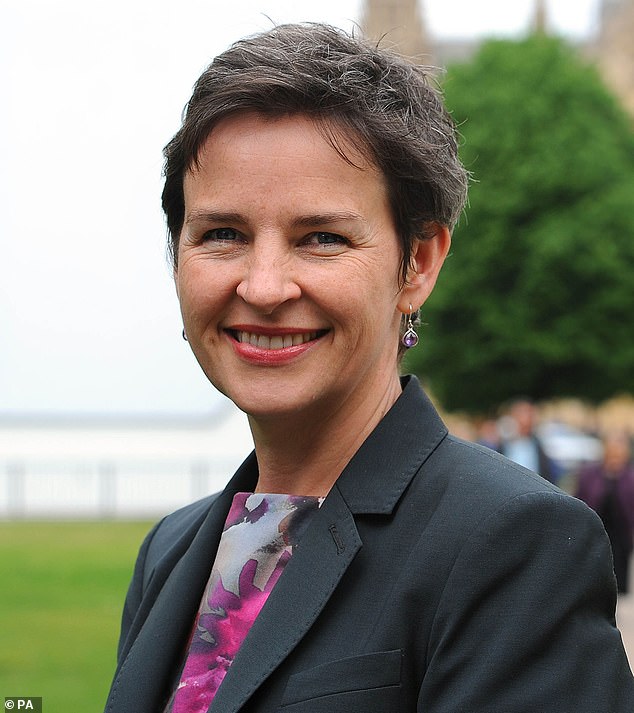 Mary Creagh, a former Islington councillor, quit the frontbench when Mr Corbyn was elected as leader

The Islington North MP was suspended from the party in October 2020 after he queried the findings of the Equalities and Human Rights Commission’s report into anti-Semitism in Labour during his tenure.

Corbyn described anti-Semitism as ‘absolutely abhorrent’ but said: ‘The scale of the problem was also dramatically overstated for political reasons by our opponents inside and outside the party, as well as by much of the media.’

Following his suspension over the remark, Corbyn has yet to be readmitted to the Party. Speculation has mounted that he could lose his seat at the next General Election if he chooses to stand as an independent.

Former Labour MP Mary Creagh, who was unseated from her Wakefield constituency in 2019 and is a former Islington councillor, has been tipped as a possible Labour contender for the seat.