Follow
Home » World News » Sure, prices for Apple's new iPhone 14 and other products are high. But Apple made one smart move.

Sure, prices for Apple's new iPhone 14 and other products are high. But Apple made one smart move.

Despite all the buzz and flashy features, Apple’s newest iPhones will again come at a steep cost to customers.

But one analyst believes that Apple might have made a smart move given these times of economic uncertainty by not raising device prices.

During its “Far Out” launch event Wednesday the tech giant unveiled four new models, the iPhone 14 and iPhone 14 Plus and the iPhone 14 Pro and iPhone Pro Max. Apple also announced its Watch Series 8 and the enhanced AirPods Pro 2.

The new iPhones and other hardware come during a record period of inflation and recession fears in the U.S. and as Apple celebrates the 15th anniversary of releasing the iPhone, which many consider must-have hardware that has arguably changed how we communicate with each other.

NEW TRICKS: How to make a folder on iPhone: deleting, removing and renaming folders 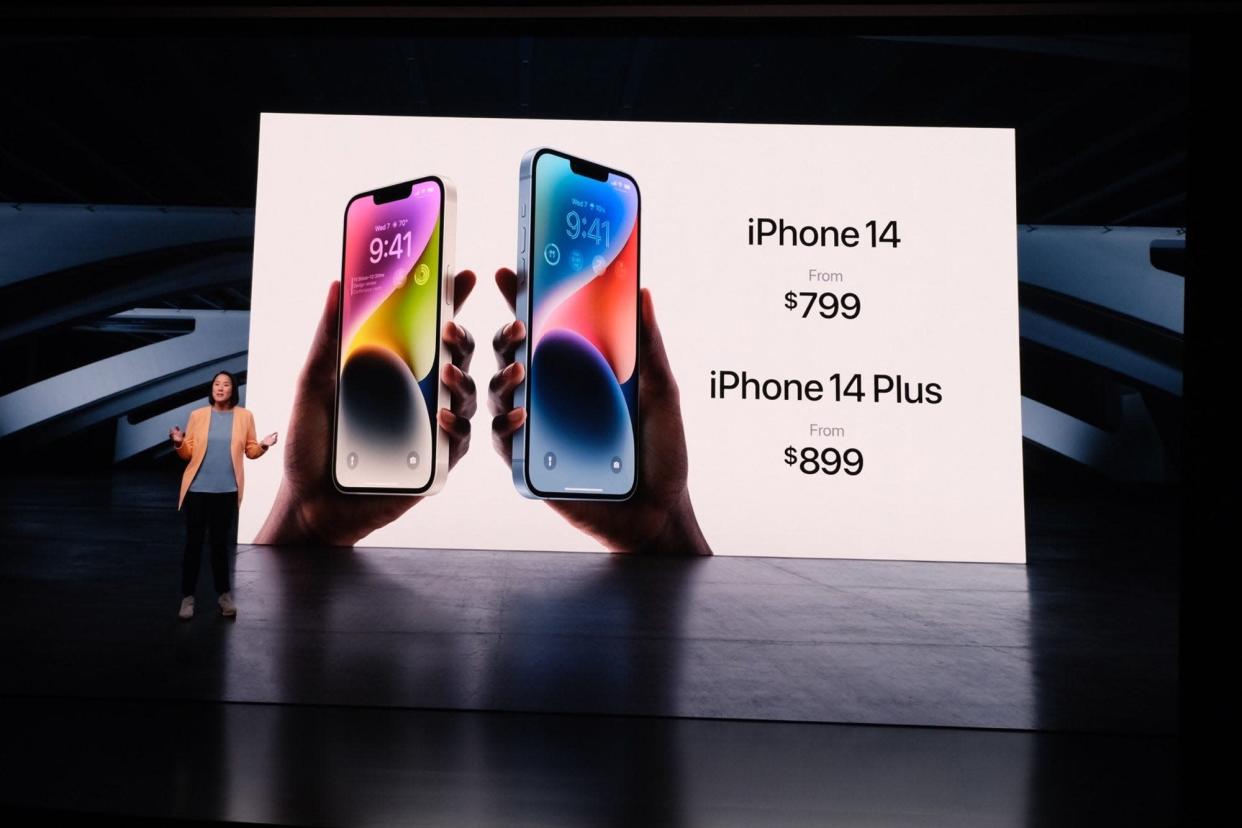 Are prices of the iPhone cost-conscious?

Let the debate begin on whether the newest iPhones are expensive. The iPhone 14 starts at $799, and the iPhone Plus starts at $899. Meanwhile, the Pro and Pro Max of the iPhone 14 models start at $999. All four devices are available to preorder on Sept. 9.

The iPhone 14 has a 6.1-inch screen, while the Plus has a 6.7-inch screen. It has a super retina custom OLED display, ceramic shield glass, and an aerospace-grade aluminum body.

The phone will come in five colors: Midnight, Starlight, Blue, Purple and Red. The phone will run on the A15 Bionic chip, so it’s expected to run faster and better than previous versions.

Prices for iPhone 14 Pro will start at $999 and iPhone 14 Pro Max at $1,099 with trade-in offers up to $1,000 off. Those models have new displays that are brighter and sharper than their predecessors. They also include the always-on display that’s supposed to minimize battery use and remain efficient.

Preorders begin on Sept. 9 and shipping will start on Sept. 16.

The new iPhone pricing is startling as analysts’ consensus predicted they would cost at least $100 more than their predecessors. But, Wedbush analyst Dan Ives said Wednesday that no price hike came as “a complete surprise” to Wall Street.

He believes that Apple took inflation, a possible recession and that the average American makes about $1,000 per week according to the Bureau of Labor Statistics, all under consideration.

This also means that the average American would have to work for 5.7 days in order to purchase the iPhone 14 Pro, provided that all the money is used to buy the device, research site Picodi.com estimated.

“I thought it was a shocker that there was no price increase and in our opinion, a strong possibility it was a last-minute decision that they decided not to raise prices,” Ives said. “Apple made a smart move by reading the room and flexed its muscles by becoming a bit consumer-conscious.”

“If the prices went up by $100, I don’t think people would be as excited about the new phones,” said Tong who has almost 250,000 subscribers on his YouTube channel mostly focusing on Apple products. “They would say ‘My phone still takes good pictures and I’m definitely not going to upgrade if it costs more.'”

Ives said Apple making the iPhone 14 somewhat more affordable than expected might help those customers who were on the fence about buying it. And as a result, Ives projects that there will be an initial demand of 90 million units for the various iPhone 14 models right out the gate.

Additionally, he said that the buying market may include an estimated 240 million out of an estimated 1 billion iPhone users who have not upgraded their iPhones in nearly four years.

“They may be starving for a new phone,” Ives said.

And there also may be a domino effect for older iPhones due to the newest models, said Chris Avila, a service manager at Flipsy.com, a smartphone reselling portal. He said Flipsy typically sees a 70% to 100% increase in business for the first four weeks after a new iPhone release as customers try to sell their old iPhones to help pay for an iPhone 14.

“With the vendors who appear on our site, customers can either get their money through cash apps like PayPal, Cash app, or Venmo or get a check. They typically pay between 1 to 3 days,” Avila said. “They are looking for the most money for their old devices.”

Ives also said the price for the new AirPods Pro which starts at $249 and launch on Sept. 23 comes at a relative deal given all of the new features including a touch volume control, 30 hours of listening time and speaker on the case.

“It’s still affordable, given all of the significant upgrades and especially given that the original AirPods was $179,” Ives said. “I think it’s going to be a strong seller.”

This article originally appeared on USA TODAY: Apple’s pricing on iPhone 14 was a ‘surprise’ — and a smart move