A suspected serial killer accused of carrying out a “vicious” spree of violence in Delaware and Pennsylvania has been indicted on 41 felony charges, including two murders, officials recently said.

“This indictment lays out one of the most vicious, staggering crime sprees I’ve seen in my career,” Delaware Attorney General Kathleen Jennings said in a statement issued Tuesday. “It is even more disturbing to think, based on what investigators have revealed in Pennsylvania, that this may just be the tip of the iceberg.”

Keith Gibson, 39, is alleged to have killed two people and injured four more in Delaware during a weekslong crime spree earlier this year, Delaware prosecutors said Tuesday. The ex-convict is also a suspect in multiple other murders committed in Pennsylvania, including the killing of his mother and the robbery and slaying of a North Philadelphia doughnut shop manager.

Gibson, who was previously convicted of manslaughter and possession of a firearm during the commission of a felony, was released from prison on Dec. 20 after a 13-year sentence. Authorities said Gibson violated the terms of his probation and was held in custody briefly before being released again on April 27.

Investigators allege that Gibson shot and killed Leslie Ruiz-Basilio, 28, during a robbery at a cellphone store in Elsmere, Del., on May 15, then stole her car.

Gibson then shot and killed Ronald Wright, 42, during a June 5 street robbery in Wilmington, also shooting another man, prosecutors said.

Earlier that same day, Christine Lugo, 40, was accosted by a gunman as she opened up her Philadelphia doughnut shop. Philadelphia police allege Gibson pushed her inside at gunpoint, took about $300, shot her in the head and fled. She was pronounced dead at the scene. 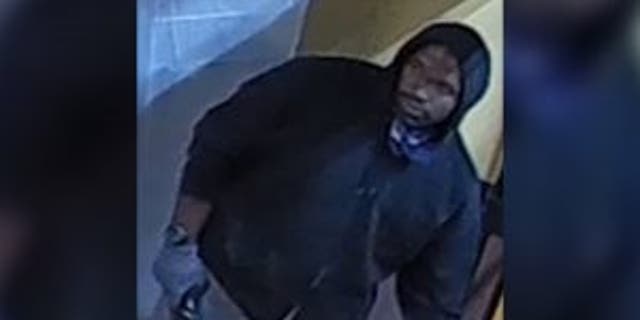 Investigators believe Gibson robbed or assaulted three other people in Delaware, and tried to murder one of them, over the following three days. He was arrested June 8 in connection with the robbery of a Wilmington, Del., Rite-Aid during which a clerk was pistol-whipped.

Authorities in Pennsylvania also plan to charge Gibson in the shooting death of his mother, Christine Gibson, 54. She was found shot to death in February. He is also a suspect in a January double murder in Philadelphia’s Germantown neighborhood.

In an email Tuesday, Philadelphia Police Department spokesperson Officer Tanya Little told The Associated Press: “We are still awaiting extradition for him before we can charge him with the murders he committed in Philadelphia.”