Follow
Home » World News » Sydney may be the cocaine capital, but Melbourne is the home of heroin

Sydney may be the cocaine capital, but Melbourne is the home of heroin

The average Sydneysider used almost twice as much cocaine as people in Melbourne over a year of testing, while the reverse is true for heroin, wastewater testing shows.

The Australian Criminal Intelligence Commission’s latest wastewater report reveals markedly varied use of different drugs across state capitals, and patterns begin to emerge depending on where in the country you look.

Cocaine use is concentrated in the nation’s south-east. The most recent year of results estimated Sydney used almost 800mg of cocaine per 1000 people per day, on average. Melbourne and Brisbane used about 450mg per 1000 people per day in that time, but that was still almost five times the amount in isolated Perth (102mg).

Dr Marianne Jauncey, the medical director of the Uniting Medically Supervised Injection Centre, says the wastewater data shows the punitive approach to drug use is not effective.

“The one thing about all measurements of drug use is that they show it isn’t going anywhere,” she said.

“As a clinician I’m interested in drug use in how it is can harm people … most drug use does not do that. That is not well understood.”

Australian methamphetamine use is so high it outpaces many countries’ use of all major stimulants.

The geographical patterns are not unique to illegal substances: for example, the data suggests there is no uniform national drinking culture.

Sydney drank more alcohol than Melbourne, Adelaide and Perth over 12 months: about 1200 standard drinks per 1000 people per day, compared with about 875 standard drinks in the others. All pale in comparison to Hobart (2142) and Darwin (2933). The latter pair are also clear leaders in nicotine consumption.

Methamphetamine use was high across all capital cities, led by Adelaide (1325mg per 1000 per day). Perth (1033mg), which ranked low for a range of drugs, came just ahead of Sydney and Melbourne (about 1025mg). Hobart recorded the lowest result – still almost 500mg.

Australian methamphetamine use is so high it outpaces many countries’ use of all major stimulants. 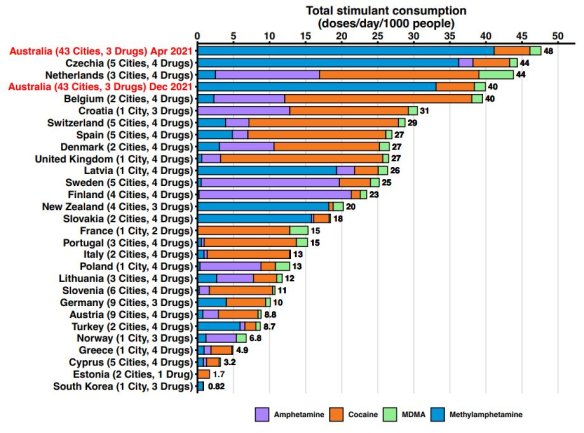 Australia is ranked first for illicit stimulant consumption (amphetamine, methylamphetamine, MDMA and cocaine) in standardised comparisons across 129 cities in 28 countries, co-ordinated by the SCORE Network of mainly European laboratories.

At first glance, Hobart had one of the lowest heroin rates (23mg per 1000 people per day), but it led the country in consumption of fellow opioids, fentanyl and oxycodone.

Dr Amy Peacock, who leads the National Drug and Alcohol Research Centre’s drug trends program, said there were limits to wastewater testing but understanding the full picture of how and why people used drugs was important.

Peacock said regional variations in drug use are, at a basic level, a question of supply and demand – but they could also be driven by things like geographical proximity to drug production, trafficking routes and drug dependence.

“For example, reduced availability of a certain drug may cause some people to reduce or cease their use of that drug or seek out treatment where needed,” she said. “Alternatively, it may lead some people to engage in drug use behaviours which might increase their risk of harm, such as seeking out a different drug which might carry greater risks.”

Jauncey said heroin, like cocaine, was an exclusively imported drug that made it difficult to buy due to Australia’s isolation and tough border controls.

She said the alarming seizure of 11.2 kilograms of fentanyl last month suggested the Australian market was at risk of relying more heavily on the lethal opiate.

“The Northern Territory and Tasmania traditionally don’t get heroin because it’s used up by all the major cities – it’s gone before it gets there,” she said.

“The sector is definitely nervous about illicitly manufactured fentanyl, which is driving a terrible problem in the United States.

“Everyone working in the sector here – that is already stretched and underfunded – is concerned that it will hit Australia; that very large seizure tells us that people are trying to get it in here.”