Vilnius, Lithuania: After a Taiwanese state company promised to buy all the Lithuanian rum China rejected, the island’s government has announced an investment fund and other measures to help Lithuania face major economic pressure from China.

“The $US200 million [$278 million] fund will be used for investments into the Lithuanian economy and help its business, primarily into semiconductors, laser technology, biotech and other key industries,” Eric Huang, representative of the Taiwanese mission to Lithuania, said. 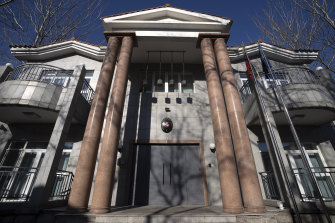 The Lithuanian embassy in Beijing has been closed since mid-December following a dispute over Taiwan.Credit:AP

Lithuania broke with diplomatic custom by agreeing that the Taiwanese representative office in the Baltic nation’s capital, Vilnius, would bear the name Taiwan instead of Chinese Taipei, a term used by other countries to avoid offending Beijing. China considers Taiwan part of its territory with no right to diplomatic recognition.

The de facto embassy opened in November and Lithuania is planning to open its own trade office in Taiwan later this year. It has infuriated China, which withdrew its ambassador to Vilnius and expelled the Lithuanian ambassador to Beijing. Lithuania, a member of the EU and NATO, has closed its embassy in Beijing over the dispute.

Taiwan said it was ready to help Lithuania in resupplying trade, with the island saying goods were stopped from entering China.

“There are more than 120 sea containers — at least €1.5 million [$2.3 million] worth — blocked by Beijing. We’re ready to take all of those and help Lithuanian companies,” Huang said. 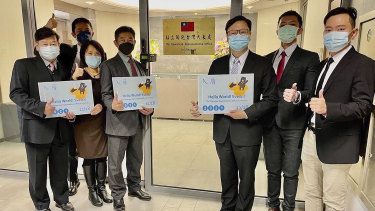 Eric Huang, newly appointed director to the representative office, third from right, poses with other staffers outside the Taiwan Representative Office in Vilnius, Lithuania.Credit:MFA/AP

A Taiwanese company said on Tuesday it had purchased 20,400 bottles of Lithuanian rum that China refused to allow into the country to show support for the Baltic nation. The South China Morning Post reported that state-owned Taiwan Tobacco and Liquor said it bought the alcohol from MV Group Production last month after learning that Chinese customs was denying permission for it to be imported.

Chinese Foreign Ministry spokesman Zhao Lijian has called it “false news” that Beijing has blocked Lithuanian imports or pressured multinational companies that do business with the EU country.

“If there’s a problem with any products’ export to China, the enterprises concerned can report it to the Chinese authorities through normal channels. The individuals in the EU should respect facts and stop making irresponsible remarks,” Zhao said late last month.

He added that Lithuania “seriously damaged the political basis of our diplomatic relations” and that he has “heard that some Chinese enterprises no longer see Lithuania as a trustworthy partner.” 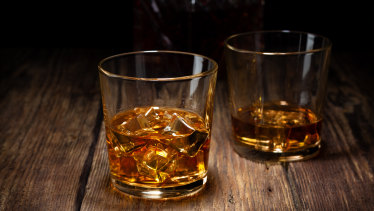 A Taiwanese state company said it bought all the rum from Lithuania that China reportedly blocked.Credit:iStock

Lithuanian President Gitanas Nauseda said on Tuesday that using the Taiwan name for the mission was a mistake and expressed regret that the step was not coordinated with him. He didn’t, however, say he disapproved of the actual opening of the Taiwanese mission.

“There is a significance in the name. Taipei only represents a city, a capital. Taiwan has a more clear definition. There is no violation of any laws calling our country Taiwan,” he said.

Lithuanian Prime Minister Ingrida Simonyte on Tuesday discussed the tense situation with European Commission President Ursula von der Leyen, who later in a tweet pledged the EU’s support to the nation of 2.8 million in “current trade irritants with China.”