Kabul: The Taliban has stormed an apartment in Kabul, smashing the door in and arresting a women’s rights activist and her three sisters, an eyewitness said on Thursday.

The activist, Tamana Zaryabi Paryani, was among about 25 women who took part in an anti-Taliban protest on Sunday against the compulsory Islamic headscarf, or hijab, for women. 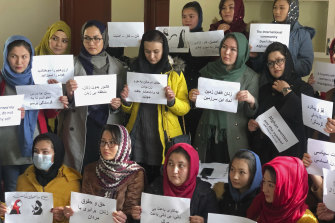 Afghan women during a protest in Kabul late last year.Credit:AP

A person from the neighbourhood who witnessed the arrest said about 10 armed men, claiming to be from the Taliban intelligence department, carried out the raid on Wednesday night.

Shortly before the woman and her sisters were taken away, footage of Paryani was posted on social media, showing her frightened and breathless and screaming for help.

“Help please, the Taliban have come to our home … only my sisters are home,” she is heard saying in the footage. There are other female voices in the background, crying. “I can’t open the door. Please help!”

Associated Press footage from the scene on Thursday showed the apartment’s front door, made of metal and painted reddish brown, dented. An outer security door of steel slats was shut and padlocked, making it impossible to enter the apartment.

The witness said the raid took place around 8pm local time. The armed men went up to the third floor of the Kabul apartment complex where Paryani lives and began pounding on the front door.

When she refused to answer, they kicked the door repeatedly until it opened, the witness said.

“They took four females away, all of them were sisters,” the witness said, adding that one of the four was Paryani, the activist.

The witness spoke on condition of anonymity, fearing Taliban reprisal.

However, he tweeted that “insulting the religious and national values of the Afghan people is not tolerated anymore” – a reference to Sunday’s protest during which the protesters appeared to burn a white burqa, the all-encompassing traditional head-to-toe female garment.

Hamraz accused rights activists of maligning Afghanistan’s new Taliban rulers and their security forces to gain asylum in the West.

Since sweeping to power in mid-August, the Taliban have imposed widespread restrictions, many of them directed at women.

Women have been banned from many jobs outside the health and education field, their access to education has been restricted beyond sixth grade and they have been ordered to wear the hijab. 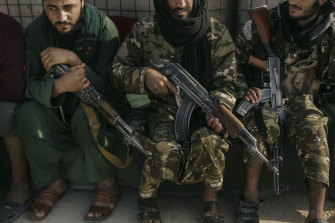 The Taliban have continued a crackdown on women’s rights.Credit:Lorenzo Tugnoli/The Washington Post

The Taliban have, however, stopped short of imposing the burqa, which was compulsory when they previously ruled Afghanistan in the 1990s.

At Sunday’s demonstration in Kabul, women carried placards demanding equal rights and shouted: “Justice!” They burned a white burqa and said they cannot be forced to wear the hijab. Organisers of the demonstration said Paryani attended the protest, which was dispersed after the Taliban fired tear-gas into the crowd.

Paryani belongs to a rights group known as Seekers of Justice, which organised several demonstrations in Kabul, including Sunday’s. The group’s members have not spoken publicly of her arrest but have been sharing the video of Paryani.

The New York-based Human Rights Watch criticised the crackdown, saying that since taking over Afghanistan, the Taliban “have rolled back the rights of women and girls, including blocking access to education and employment for many.”

“Women’s rights activists have staged a series of protests; the Taliban has responded by banning unauthorised protests,” the watchdog said in a statement after Sunday’s protest.

Also Thursday, the Committee to Protect Journalists (CPJ) issued a statement asking the Taliban to investigate a recent attack on a documentary filmmaker Zaki Qais, who said two armed men, who identified themselves as Kabul police officials, entered his home and beat him. One tried to stab him, according to Steven Butler, the CPJ’s Asia program co-ordinator.

“Afghanistan’s Taliban rulers must immediately launch an investigation to identify and bring to justice those who attacked journalist Zaki Qais,” said Butler.

“The Taliban’s continued silence on these repeated attacks on journalists undermines any remaining credibility of pledges to allow independent media to continue operating.”

Last week the CPJ sought information on an attack on another Kabul-based journalist, Noor Mohammad Hashemi, deputy director for the non-profit Salam Afghanistan Media Organisation, who was beaten up by three unidentified men.