Taxpayers could be left footing the hotel quarantine bill for THOUSANDS of Brits arriving back from red list countries who cannot afford £1,750 cost of isolation after ministers backed down in the face of a legal challenge

Taxpayers could be left to foot the hotel quarantine bill for thousands of people arriving in the UK from red list countries who cannot afford the £1,750 cost, it was revealed today.

Ministers have previously refused to make the scheme means tested but caved in after a legal challenge brought by some arrivals ordered to self-isolate for 10 days.

Their lawyers argued that the one-size-fits all payment system was manifestly unfair on poorer arrivals and threatened to seek a judicial review.

Government lawyers backed down and said travellers will be able to ‘apply for a fee waiver or reduction on the grounds of financial hardship’.

They requested an eight week delay to legal action due to start this week in order to bring in the changes.

Current red list countries include India, Pakistan, Bangladesh and Turkey, which have strong links to the UK.

It comes at a time when ministers are preparing to potentially make it easier for the vast majority of Brits to travel abroad, by removing the requirement for self-isolation at home after visiting amber list countries.

Ministers have previously refused to make the scheme means tested but caved in after a legal challenge brought by some arrivals ordered to self-isolate for 10 days. 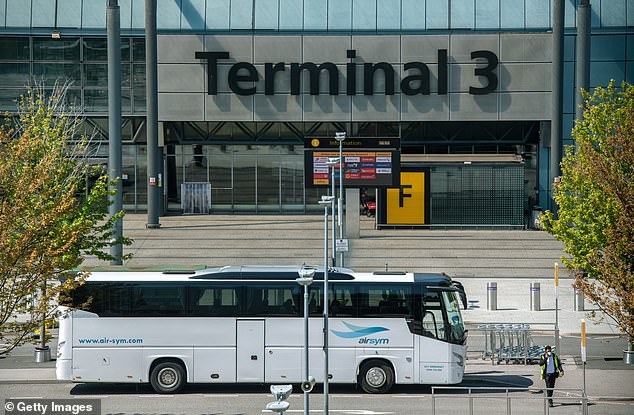 Their lawyers argued that the one-size-fits all payment system was manifestly unfair on poorer arrivals and threatened to seek a judicial review.

Taylor Burgess, senior associate at law firm PGMBM, which brought the legal challenge, said: ‘This policy was rushed through Parliament and introduced without due thought as to how its one-size-fits-all application would penalise vulnerable citizens and residents.

‘We are very pleased that our challenge has led the Government to review the policy, yet it remains frustrating that it has taken legal action for changes to be made.

‘Many thousands of people have been subject to exorbitant costs over the past several months or been entirely prevented from undertaking essential travel or returning home because of the financial hardship they would face after paying the costs to quarantine.

‘Now the Government wants eight weeks to change this flawed policy. Why must this drag on for those individuals and families who are continuing to suffer from the financial strain of meeting costs for quarantine, and unduly affect many more people?

‘We have asked the Government whether they will be undoing the damage caused by this policy by reviewing previously incurred costs retrospectively. There are people that are still suffering months after leaving quarantine after taking out loans or being forced into debt. It’s imperative that the Government makes this clear as soon as possible.’

Under the scheme introduced in February, arrivals have to pay £1,750 for their stay in a hotel, with additional costs of £650 for adults and £325 for children. This means that a family of four arriving back in the UK would face paying more than £2,000 on top of their travel costs.

The scheme has been criticised by those forced to use it over the costs but also  the quality of the accommodation they have been forced to stay in.

The Government also faces a court showdown with the aviation industry this week over its traffic light system for travel.

MAG has been joined by five airlines for the judicial review.

Charlie Cornish, MAG chief executive, said: ‘The Government’s secretive approach so far has left us with no choice but to seek a court order to force them to publish how they are making these decisions.’

The court hearing will take place on Friday.