A TECH businessman blinded a man who threw a drink at him as they celebrated a footie goal in a pub together.

Shemsi Kercova, 27, was jailed for 15 months for hitting his colleague Nawal Mehta in the face while watching a match at The Phoenix pub in London. 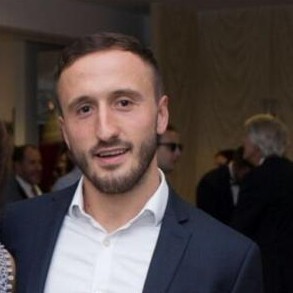 The glass in his hand smashed cutting his face and eyeball, leaving him blind in one eye.

Both men worked for Accenture, a multinational professional services company that specialises in IT services and consulting, Inner London Crown Court heard.

Kercova – who fled to the UK during the Kosovan War as a child – had been sitting at a table with three friends during the game on January 25, 2019.

They were in a "celebratory mood" as Kercova had just introduced his fiancée to the group, said Sarah Forshaw, QC, defending.

When Kercova's team scored, he "jumped up to celebrate" and some of the red wine he was drinking flicked out of his glass towards Mr Mehta.

Kercova reacted "instinctively" by hitting the victim with his left hand – which was holding the glass.

Judge Silas Reid said: "I'm quite sure you hit him hard in retaliation."

"When he threw his drink in your face, you felt the same violation as he felt moments before.

"You smashed a glass into someone's face. You hit him with considerable force, you blinded him in one eye.

"He must live with the effects of that forever."

"It is a truly life changing and destabilising injury."

Mr Mehta can no longer drive or play sports, he has lost depth perception and he is at risk of going totally blind if the other eye gets injured.

Judge Reid accepted it was a "one-off offence" that was "wholly out of character", but said the consequences to Mr Mehta were "just too serious" to suspend any sentence.

"The least possible sentence I can pass in this case is one of 15 months imprisonment," he said.

Kercova has no previous convictions and is of previous exemplary character.