Tesla facing fines over 'self-driving' claim after string of crashes

Tesla is facing heavy fines following the launch of a Department of Motor Vehicles investigation over claims its vehicles are ‘self-driving’ following a series of crashes.

California’s DMV is reviewing whether Tesla is violating a state regulation by advertising its vehicles as being fully autonomous without meeting the legal definition of self-driving.

The department confirmed the review Monday in an email to The Associated Press.

Tesla advertises a $10,000 ‘Full Self-Driving’ option on the website for its electric vehicles, but the same website says the vehicles cannot drive themselves. 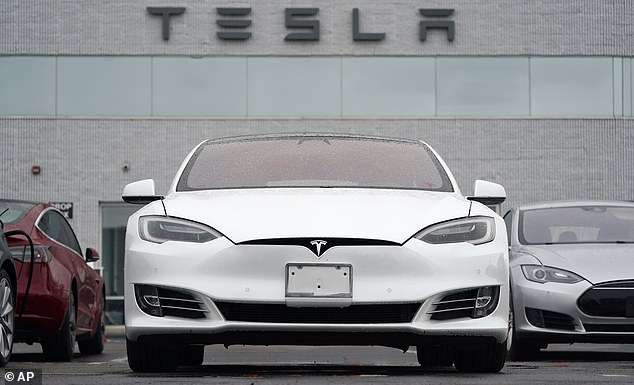 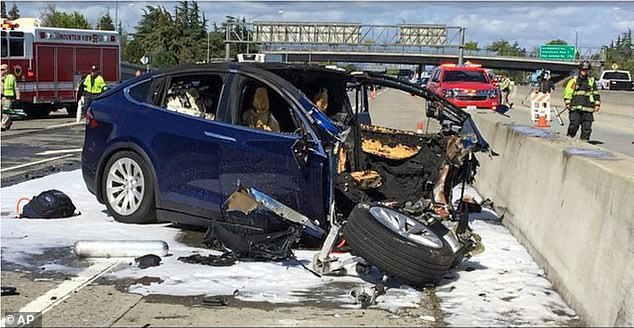 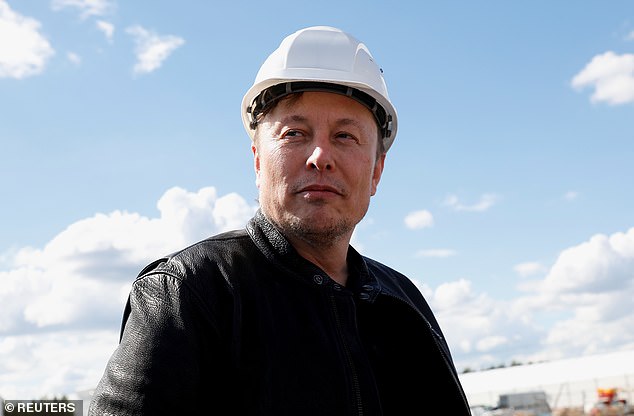 CEO Elon Musk has claimed Tesla’s vehicles will be fully self-driving, and be safer than humans, by the end of 2021

CEO Elon Musk has said he expects Tesla’s vehicles will be able to drive themselves more safely than humans sometime later this year.

‘The current enabled features require active driver supervision and do not make the vehicle autonomous,’ the website says.

Tesla is testing its ‘Full Self-Driving’ software in the U.S. in cars driven by selected owners.

Tesla, which has disbanded its public relations department, did not respond Monday to a request for comment.

The DMV, which regulates testing of self-driving vehicles on California roads, said violating the regulation can bring a suspension of autonomous vehicle permits and revocation of a manufacturer’s license.

Tesla has a DMV permit to test autonomous vehicles with human backup drivers. But it is not among the companies permitted to test without human drivers. 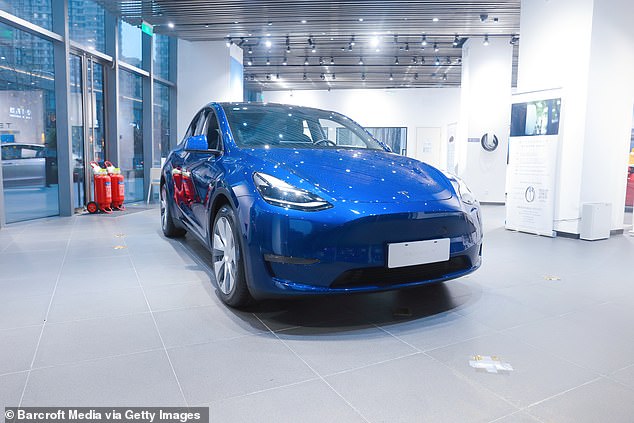 Tesla has a DMV permit to test autonomous vehicles with human backup drivers. But it is not among the companies permitted to test without human drivers

In several tweets, Musk has made lofty predictions about being able to have full self-driving cars within the year, but with a recent string of crashes, it seems unlikely

The company says its ‘Full Self-Driving’ software can navigate, automatically change lanes and follow traffic lights and stop signs. ‘Autopilot’ can keep a car centered in its lane and a safe distance from vehicles in front of it.

The probe comes amid several high-profile crashes across the country – including a fatal wreck in California – involving Autopilot in recent weeks.

On Saturday, a Tesla in autopilot mode plowed into a Snohomish County deputy’s patrol car north of Seattle, causing significant damage but no injuries.

In mid-April, two men died after a Tesla ‘on autopilot with no one driving’ crashed into a tree in Houston before starting a huge fire that took 32,000 gallons of water to extinguish.

The fully-electric 2019 Tesla Model S slammed into the tree in Carlton Woods at around 11.25pm before bursting into flames with the passengers still inside.

Harris County Precinct 4 Constable Mark Herman said an investigation had found that ‘no one was driving’ when the accident happened, with one man sitting in the passenger seat at the front and the second sitting in the back.

But Tesla had refuted police’s claims, saying a deformed steering wheel suggested that someone was likely in the driver’s seat.

Musk said in the crash’s immediate aftermath data downloaded by Tesla indicate the vehicle was not operating on Autopilot, its semi-autonomous driving system.

The Mack truck, which the Tesla collided with, had crashed and overturned just five minutes earlier, blocking two lanes of the highway, according to a highway patrol report. 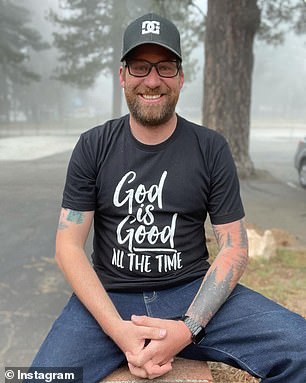 Steven Michael Hendrickson, 35, may not have had his hands on the wheel

The California Highway Patrol initially said its preliminary investigation had found that Autopilot ‘was engaged’ prior to the crash, but rowed back on its statement a day later.

Investigators have not made ‘a final determination as to what driving mode the Tesla was in or if it was a contributing factor to the crash,’ it said.

The victim, married father of two Steven Michael Hendrickson, 35, had previously posted social media videos of himself riding in the vehicle without his hands on the wheel or foot on the pedal.

Hendrickson was a member of the Southern California chapter of a Tesla club and posted numerous photos and video on social media of his white Tesla.

One video on his Instagram account showed him riding in the driver’s seat without his hands on the wheel or foot on the pedal as the Tesla navigated freeway traffic.

The video included the comment: ‘Best carpool buddy possible even takes the boring traffic for me.’ 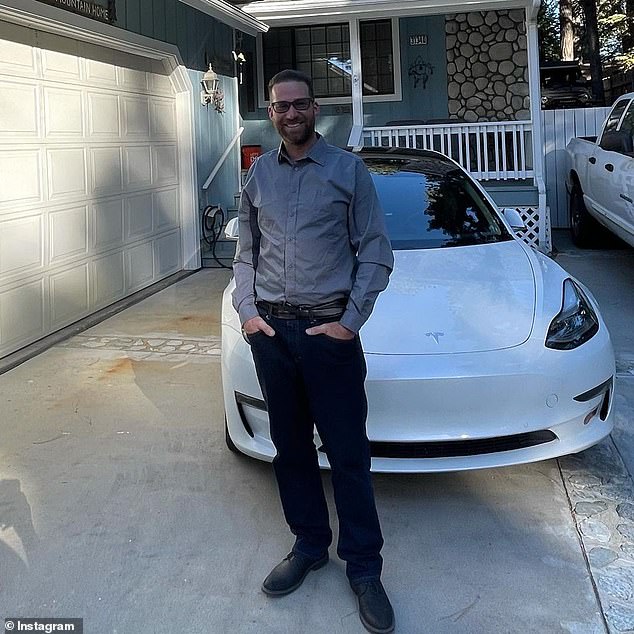 He had previously shared shared videos of himself driving car without his hands on the wheel or foot on its pedal, investigators have said

In the past, NHTSA, has taken a hands-off approach to regulating partial and fully automated systems for fear of hindering development of promising new features.

But since March, the agency has stepped up inquiries into Teslas, dispatching teams to three crashes.

It has investigated 28 Tesla crashes in the past few years, but thus far has relied on voluntary safety compliance from auto and tech companies.

At least three people have been killed in U.S. crashes in which Autopilot was operating but neither the system nor the driver took action to avoid obstacles.

Tesla is allowing a limited number of owners to test its self-driving system, which warns drivers that they must still keep their hands on the car’s steering wheel.

The company says in owner’s manuals and on its website that both Autopilot and ‘Full Self-Driving’ are not fully autonomous and that drivers must pay attention and be ready to intervene at any time.

California’s DMV has accused Tesla boss Elon Musk of exaggerating when his cars might become fully-autonomous.

They currently operate at Level 2 autonomy – meaning they can change lanes or round bends by themselves. No car manufacturer has come anywhere close to Level 5 – fully autonomous driving.

Earlier this month, Tesla privately admitted to the DMV CEO Elon Musk has been exaggerating plans to have fully-autonomous self-driving cars on the road by 2022.

The acknowledgment was revealed in a summary of answers to questions put to the company by with the state’s Department of Motor Vehicles. They were released by legal transparency group PlainSite, and first reported by The Verge.

Tesla reportedly told DMV officials it is unlikely to reach Level 5 – fully autonomous driving – by the end of 2021. 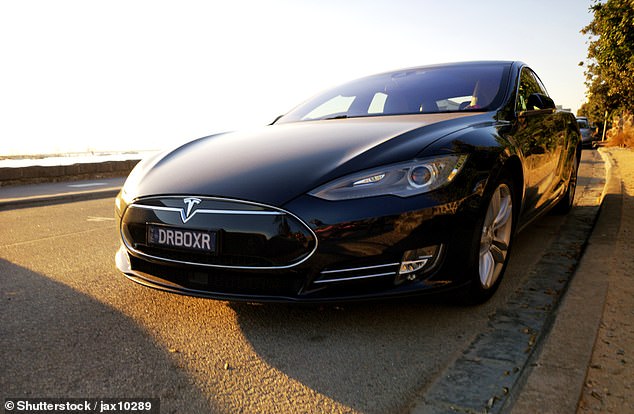