Two million dollars is a tiny fraction of the $7.64 billion that was spent on building and upgrading schools in Australia in 2019.

But for Victoria Road Primary School, the modest injection of capital funding was revolutionary. 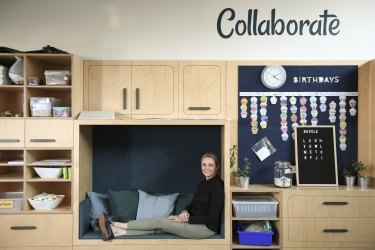 The government grant was just enough for the state school in Lilydale to renovate its classrooms for the first time in its 50-year history, principal Lisa Branch says.

“Before that it was pretty much exactly like it was when it was built 50 years ago,” she said. “A big corridor down the middle, which took up a lot of space, with small rooms on either side that were isolated from each other and quite dark.”

The school used its $2.11 million grant to knock out the central corridor and build larger, light-filled rooms where children could learn as one or in smaller breakaway groups.

“It has really enabled us to … teach the way that we want to teach,” Ms Branch said.

Fifty kilometres away at Hampton Primary School, it’s a different story. The 110-year old school of 650 students has been lobbying without success for several years for a large indoor gym so it can host whole-school sports programs and assemblies.

“We have got a lot of old facilities here and we are OK with that, we don’t need new facilities,” principal Joshua Sheffield said.

“But there is nowhere for indoor sport, nowhere for the PE teachers to run a program if it’s too hot or too wet; we’re lacking some pretty basic stuff … that every large school should have.”

On a per-student basis, non-government schools received between two and four times more funding each year than public schools, or $12,450 more per student over the 10-year period.

Economist Adam Rorris, who analysed capital funding in his report Investing in Schools, Funding the Future said the data showed “investment in Australian schools has favoured private students to an astonishing degree”. He argued government funds for capital works would be better directed at under-resourced schools.

“You’re not going to to get a great deal of bang for your buck in terms of learning, in terms of kids staying in school, if you invest it in a school that already has all of that and you’re just giving them something even better.”

Correna Haythorpe, president of the Australian Education Union federal branch, which commissioned the report, said it showed that the only years in which government schools received more funding for capital works than non-government schools was in 2010-12, when the former federal Labor government’s Building the Education Revolution economic stimulus program was under way.

Ms Haythorpe called on the Morrison government to invest more in school buildings and modern facilities such as science labs, libraries and gyms.

“When children are learning in modern classrooms that are well maintained and equipped for the future, they can thrive and reach their full potential,” she said.

A spokesperson for the Commonwealth Department of Education, Skills and Employment said most of the funding for capital works at schools came from private sources such as parents’ fees.

“The majority of capital expenditure at non-government schools is derived from private income sources – around 92 per cent in 2019,” the spokesperson said.

Governments have also contributed hundreds of millions of dollars to non-government schools each year, including $310 million in 2019, the most recent year for which data is published.

Independent Schools Australia said in a statement that non-government schools that qualified for capital funding grants had to demonstrate a financial need and show that their supporting communities did not have the capacity to meet the total cost of the project.

“Following the [capital grants program] guidelines ensures that the funds allocated are aimed at providing and improving capital infrastructure for the most educationally disadvantaged students,” a spokesperson said.

“We’re giving our kids the classrooms they deserve and, importantly, creating thousands of new jobs,” he said.

It is also spending $402 million to build and upgrade Catholic and independent schools, through a four-year capital grants program.