Follow
Home » World News » The 5 places where Covid cases are rising fastest – is YOUR area on the hotspot list?

The 5 places where Covid cases are rising fastest – is YOUR area on the hotspot list?

CORONAVIRUS cases are rising fast in five areas as the Indian variant continues to spread and this interactive map reveals if your local area is on the hotspot list.

Data from Public Health England (PHE) shows that in the last seven days, 39 per cent of local areas have seen a rise in cases.

Around 58 per cent have seen a fall and 11 are unchanged.

The data shows that cases are rising fastest in areas where the Indian variant has been confirmed as the dominant strain.

Cases of the variant have doubled in a week with 3,424 infections now in UK.

Some date back to mid-April when the strain first arrived in the UK before rapidly spreading.

The North West has become a hotbed for the variant and four of the five hotspot areas have high case rates.

This is up from 189.2 in the seven days to May 9 – it is also the area where rates have risen fastest in the last seven days. 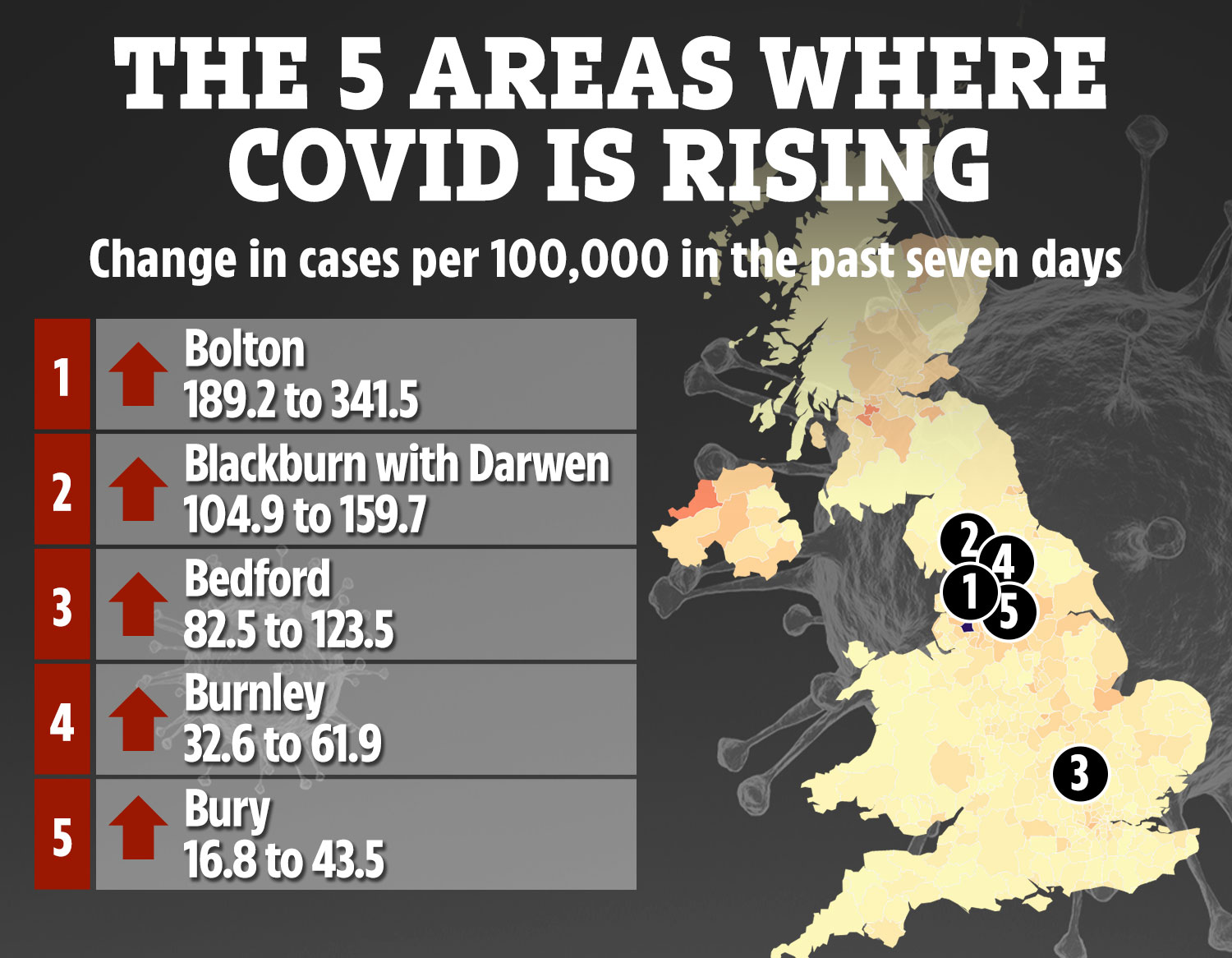 Earlier this week Health Secretary Matt Hancock said that some people who were in hospital in Bolton with the Indian variant had not received a coronavirus vaccine – despite being eligible.

Surge testing is ongoing in the B3 postcode area and vaccine sites have beenopen for longer so as many people can get the jab as possible.

Another area where cases have risen fastest in the last seven days is Blackburn with Darwen.

The only area to not be part of the North West cluster of cases is Bedford.

Bedford has the third highest rate of infection, up from 82.5 to 123.5, with 214 new cases and is also the third area where cases are rising fastest.

Experts this week said they were "really worried" about the area as cases there have risen ten times in the last month.

Bedford's director of public health Vicky Head said cases in the borough linked to the Indian variant had jumped from "three or four" a day to up to 10 times that figure over the past month.

Cases have also risen by more than double in every other region except Yorkshire and London, where they have gone up by 70 to 80 per cent.

No other part of the country has case numbers as high as the North West,

The numbers are relatively small when compared to population size. But it shows how quickly the virus has been able to spread between people.

While cases are rising fast in the five areas above, there are some parts of England where cases are few and far between. 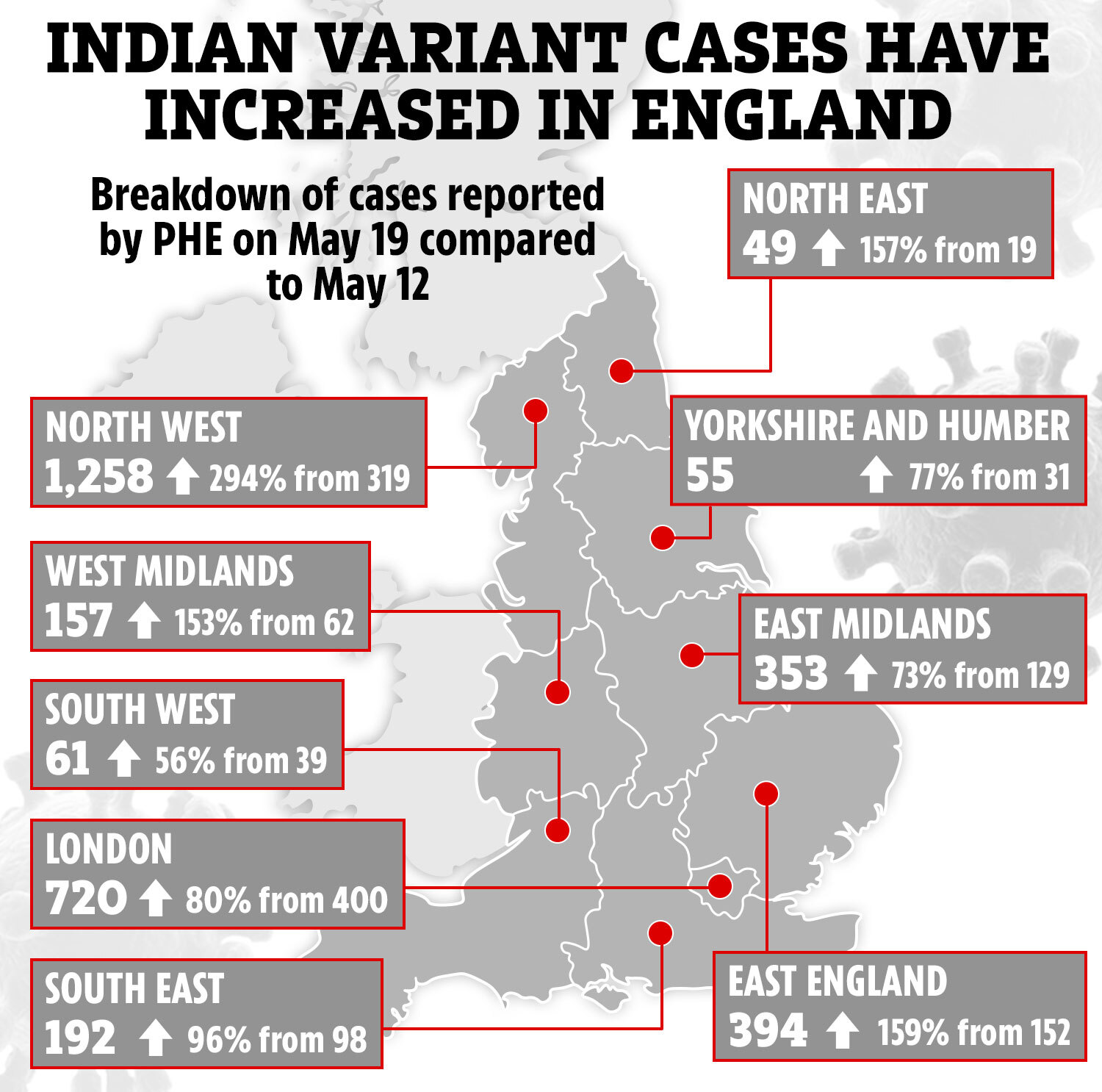 Rydale had just one new Covid case, Tewkesbury and Runnymede, two and South Somerset had four.

One expert however today warned that if cases of the Indian variant continue to grow then the last set of lockdown rules could take longer to lift.

Professor Peter Openshaw said: "Looking at the rate of rise, I personally would feel very concerned that this is going to become quite a major issue of the next few weeks and that might very well delay the opening up."

He said that while he "desperately hopes" the country can get back to some sort of normality – we have to redouble the efforts to make sure that everyone who is eligible for a vaccine has one."