Follow
Home » World News » The chant, the rant and the political slant

The chant, the rant and the political slant

Melburnians love to dress in black, drink coffee and go to the footy but above all, they love nothing better than to gather in groups and shout slogans. The only thing better is to shout slogans at people who are shouting other slogans.

Sometimes we wave placards. Sometimes they are even spelt correctly. 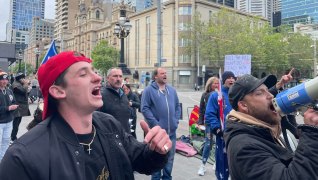 Protesters outside Melbourne’s Parliament house. A reverse baseball cap helps validate one’s point of view. A gent with a bullhorn without a bull in sight.Credit:Chris Hopkins

Protests are a little like home-brewed beer. Mine is complex, deep and deserves to be savoured while yours stinks of old socks and gives you wind.

Little wonder Chief Commissioner Shane Patton has reiterated that peaceful protests are part of the democratic process and Melbourne is the demonstration capital of Australia.

In Melbourne, we are seeing a new type of protest where people with a number of different causes come together not to push a view but express 1000 different views.

Some want to make a point and others make a mess.

As is often the case, we in the media concentrate on the most interesting (read whacky) views — the extremists who make the rest of us wonder if they had either sugary cereals or backyard amphetamines for breakfast.

This disguises the fact that many who have taken to the street are rational, law-abiding people, angry at lockdowns, concerned at the erosion of civil liberties and tired of feeling their views don’t matter.

Police say far-right extremists have infiltrated the protest movement, but the term infiltration implies a level of sophistication well beyond most of these numb-nuts.

They are more like wasps at a picnic who swarm in uninvited to grab what they can. Or drunken uncles at a wedding that take to the crowded dance floor to perform hamstring-busting jigs to Nutbush City Limits.

The far-right interlopers hope to harness and divert legitimate anger towards their extremist views. Like internet scammers, most people will see them for what they are: opportunistic scum.

Sadly, a few (and it only takes one) will be sucked in. These so-called lone-wolf offenders are actually lone sheep desperately looking for a herd.

This masthead has reported that a chap called Imre Pelyva has been charged with incitement to manufacture explosives.

In an encrypted message, he allegedly asked: “Are we allowed to take firearms to the protest?”

He is alleged to have written: “Someone need [sic] to shoot Mr Dan f— in the head with a .50 cal[ibre] explosive tip! Just to make sure hes [sic] gone for life!”

Counter-terrorism police have confirmed they are conducting a series of investigations into suspected neo-Nazis who see the protest pool as a place to fish for recruits.If any are charged, one imagines they will avail themselves of their rights to a fair hearing in open court, a privilege not extended to millions of people killed by the regimes they seek to replicate. 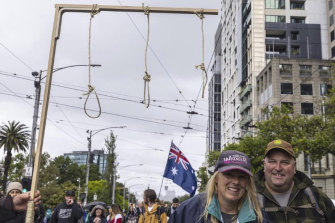 Gallows at a protest in Melbourne, 2021 style.Credit:Twitter

There is a world of difference between yelling slogans and uttering threats. One is a legitimate activity and the other a criminal offence.

There is a world of difference between anger and hate. How does anyone within handshaking distance of rational thought think their cause can be furthered by bringing gallows to a demonstration or issuing death threats to politicians?

Displaying nooses outside Parliament doesn’t impress anyone. Yet more than 50 years ago, some protesters did carry nooses to make a legitimate point. It was at the Ronald Ryan anti-hanging rally. Those demonstrations were passionate, respectful and lawful.

While the demonstrators failed to save Ryan, they were certainly influential in making sure he was the last person in Australia executed by the state. 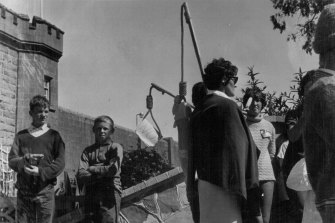 Gallows at a protest in Melbourne, 1967 style. In the days before coffee culture there was always icy poles.Credit:The Age

Peaceful protester Mahatma Gandhi built a nation. Rabid rancid ranter Benito Mussolini destroyed one (and was strung up in the process).

Mussolini once said: “Let us have a dagger between our teeth, a bomb in our hand and an infinite scorn in our hearts.”

Gandhi said: “An eye for an eye will only make the whole world blind.”

So who got the chocolates?

Nearly 100 years ago, the chief commissioner of the day, Tom Blamey, was much less tolerant of those who took to the streets to make a point. Indeed, his response was borderline psychotic.

In 1928, when dockworkers not unreasonably held protests to complain about the use of scab labour, he advised his troops to “hit over the head” those exercising their democratic rights.

His mounted branch didn’t need to be told twice, many arming themselves with axe handles to play “Whack-A-Dockie”.

Blamey was a former senior army officer who had served at Gallipoli. He would return to the military when his police career went guts-up and would become the only Australian-born Field Marshal.

Dockworker Allan Whittaker was another Gallipoli survivor but unlike Blamey, he was not given a second chance. Having survived battles with the Turks, he was shot dead by police during the protest on Princes Pier. 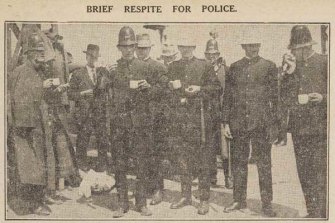 Time for a cuppa: Police take a break before crushing protests by dockworkers on Princes Pier in 1928.Credit:Age archive

Not that this seemed to bother “No Blamey” who within hours said, “I have no hesitation in saying that the action of the officer in charge was fully justified”, conveniently ignoring that an autopsy showed he was shot in the neck while looking away.

None more so than legendary hard man Keith Plattfuss, a Valour Award winner who thought compromise was a fancy Swedish aftershave.

In 1970, then an inspector, he was in charge of police at a small demonstration and charge he did, ordering his team to disperse the riff-raff with a show of force.

“The Puss” was no wuss, later declaring: “They got some baton today, and they will get a lot more in the future.” A police inquiry condemned his statement and tactics. 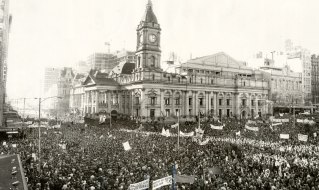 The Melbourne Town Hall engulfed by Vietnam moratorium supporters in 1971.

The public mood changed and the police had to move with it. Protests were no longer the domain of the desperate but embraced by many who wished to see constructive change.

Soon more than 100,000 people massed in Melbourne in the famous anti-war Moratorium Marches.

In 1972, chief commissioner Reg Jackson said: “In a democratic society, the right to stage peaceful protest is accepted.” He told police they should ignore minor offences to “keep down the temperature of the situation”.

Demonstrations became more mainstream, with even police marching as part of a pay rise campaign. (Their chant was ’Ello, ’Ello, What Have We Here, Then.)

Dotted through thousands of protests there have always been violent ones, such as the 2000 World Economic Forum lockdown that resulted in running battles and police baton charges. A few years ago, the rules of engagement changed again.

The ultra-right and ultra-left decided they could exercise their democratic rights to protest while the other side could not. This meant when the right rallied, the left would turn up to sabotage. Invariably, this resulted in ugly melees like a giant rugby maul (without deodorant) leaving police to pick up the pieces.

Neither side acknowledges they feed their enemies’ cause. Without the violence, these small and frankly pathetic gatherings would be ignored. It was the violence the media covered, unwittingly providing the oxygen the crackpots craved.

(Another example of the lack of thinking from some in the crowd: They make and wave placards in the hope they will end up on the telly and then abuse and assault reporters who try to interview them.)

In response, police went off and bought a heap of riot gear including 15 pepper ball guns (each with a 173-round capacity), flash-bang grenades and capsicum bombs unleashed earlier this year on anti-lockdown protesters.

That followed general duties police getting bashed at a Richmond protest while riot police sitting around the corner were not deployed.

Both events were ugly and the wounds will take time to heal.

Melbourne’s rolling lockdowns have left a mark that threatens to become a stain. But we must remember most of us just shrug our shoulders and roll with the punches.

The demonstrators will go home and life will go back to some type of normal.

Anyone for a short black and a stroll down a lane to look at spray-painted whales?