The child-friendly cereals with the highest sugar content revealed

PARENTS have been warned of the unbelievably high sugar content in “child-friendly” cereals.

A new report details the poor nutritional value of almost every cereal that attracts kids with either bright colours or cartoons. 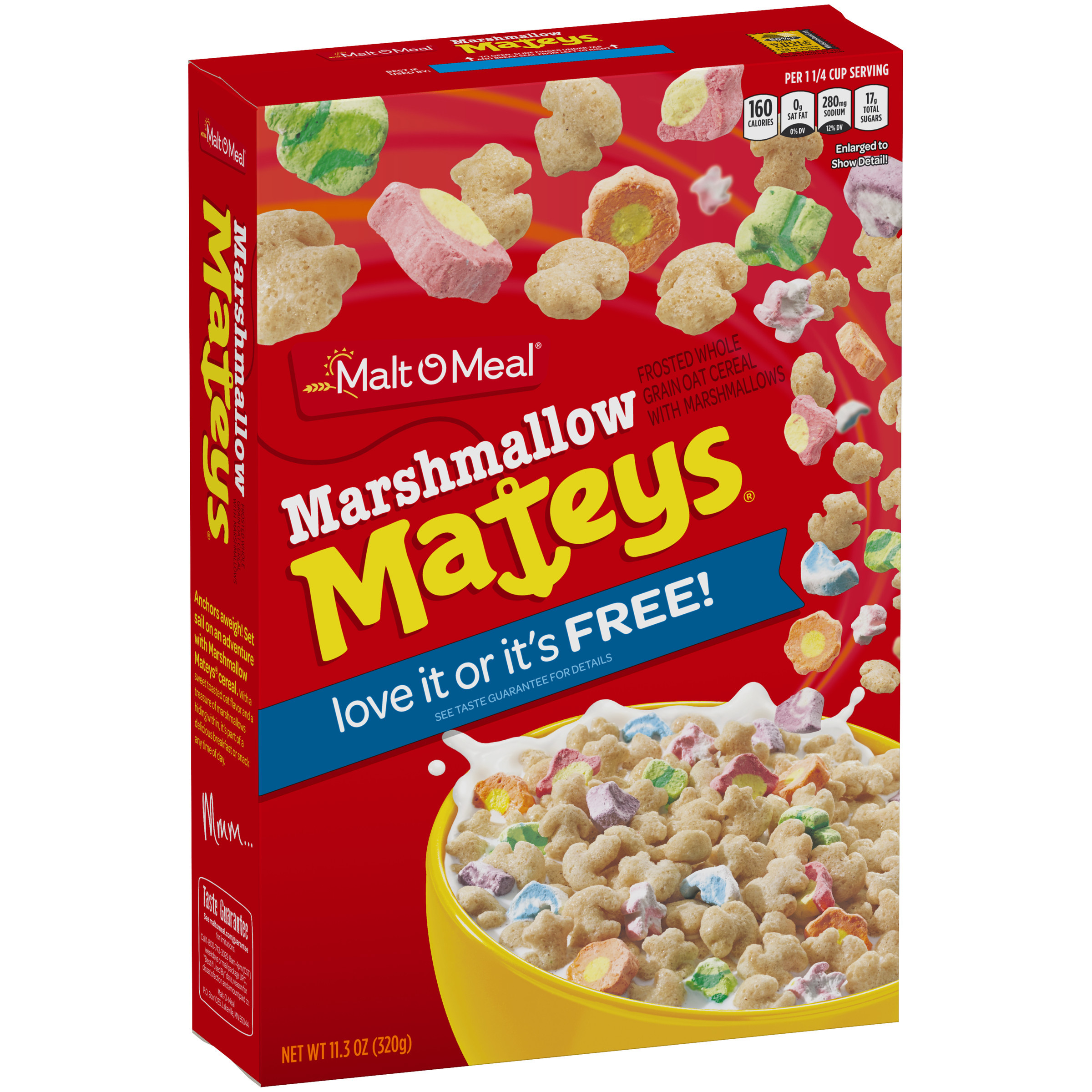 Some 92 per cent of cereals marketed towards children still contain high or medium levels of the sweet stuff.

And more than half have at least medium levels of salt.

Malt O Meal Marshmallow Mateys, which describes itself as a “delicious and nutritious breakfast for all the family” is the worst offender.

It contains 12g of sugar per serving – equivalent to three teaspoons of sugar or eating five and a half digestive biscuits.

It’s even more than a Tesco jam doughnut which is covered in sugar (6.5g).

The cereal also has the same amount of salt as a packet of crisps (0.5g per serving).

Even more terrifying is that 100g contains more sugar than a can of coke, and if kids are pouring their own cereal, it’s unlikely they are using portion control.

Children aged 7 to 10 should have no more than 24g of free sugars a day (six sugar cubes), meaning many could be going well over the healthy limit. 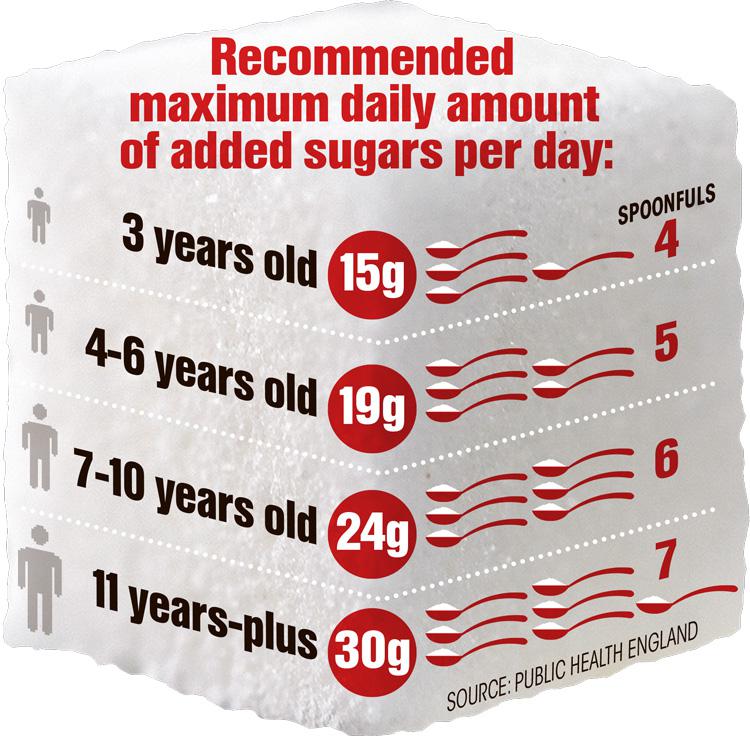 Why should sugar be limited?

It tastes great and makes us happy, so why should sugar be limited?

Eating too much of the sweet stuff can make you gain weight, which in itself is linked to lots of health problems such as type 2 diabetes.

It can also cause tooth decay, which is irreversible.

The government recommends that free sugars should not make up more than 5 per cent of the energy (calories) you get from food and drink each day.

Free sugars are added to food or drinks but they are also found naturally in honey, syrups, and unsweetened fruit and vegetable juices, smoothies and purées.

Free sugars are found in tonnes of products from chocolate and biscuits to orange juice, marmalade and honey.

Food nutritional labels do not spell out how many sugars are caused by "free sugars" and those that are natural – such as milk – making watching your intake more difficult.

Find out more about how to read nutritional labels on the NHS website.

Only two cereals of 126 analysed tick all the boxes for a healthy choice.

The data was collected by researchers at Action on Sugar and Action on Salt based at Queen Mary University of London.

It will be featured in The Food Foundation’s "Broken Plate" 2021 Report, highlighting how progress in improving breakfast cereals has stalled in recent years.

Only a tiny improvement in overall sugar levels has been seen this year, reducing by just 0.4g on average.

Researchers fear parents are being duped into buying cereals that offer barely any nutritional value. 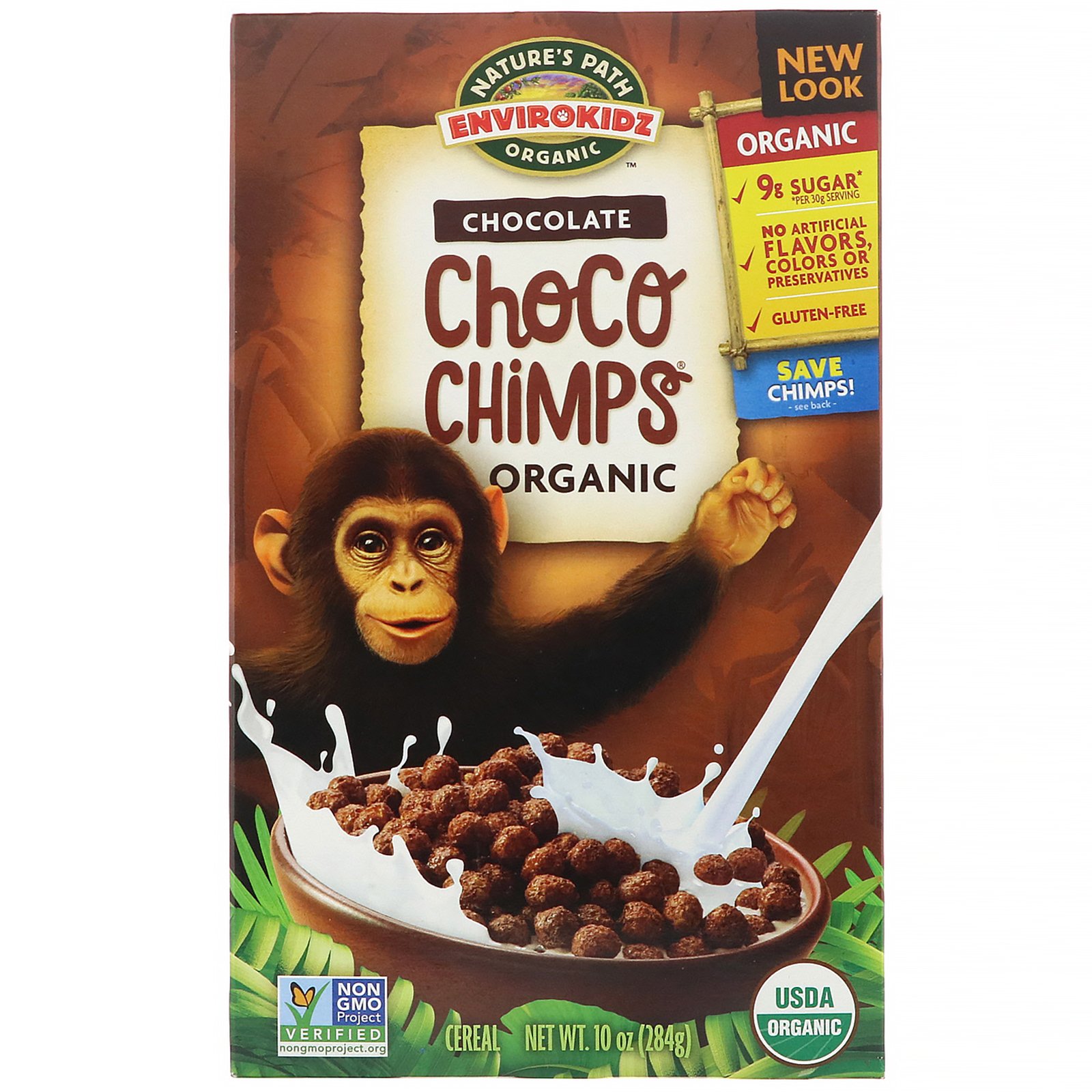 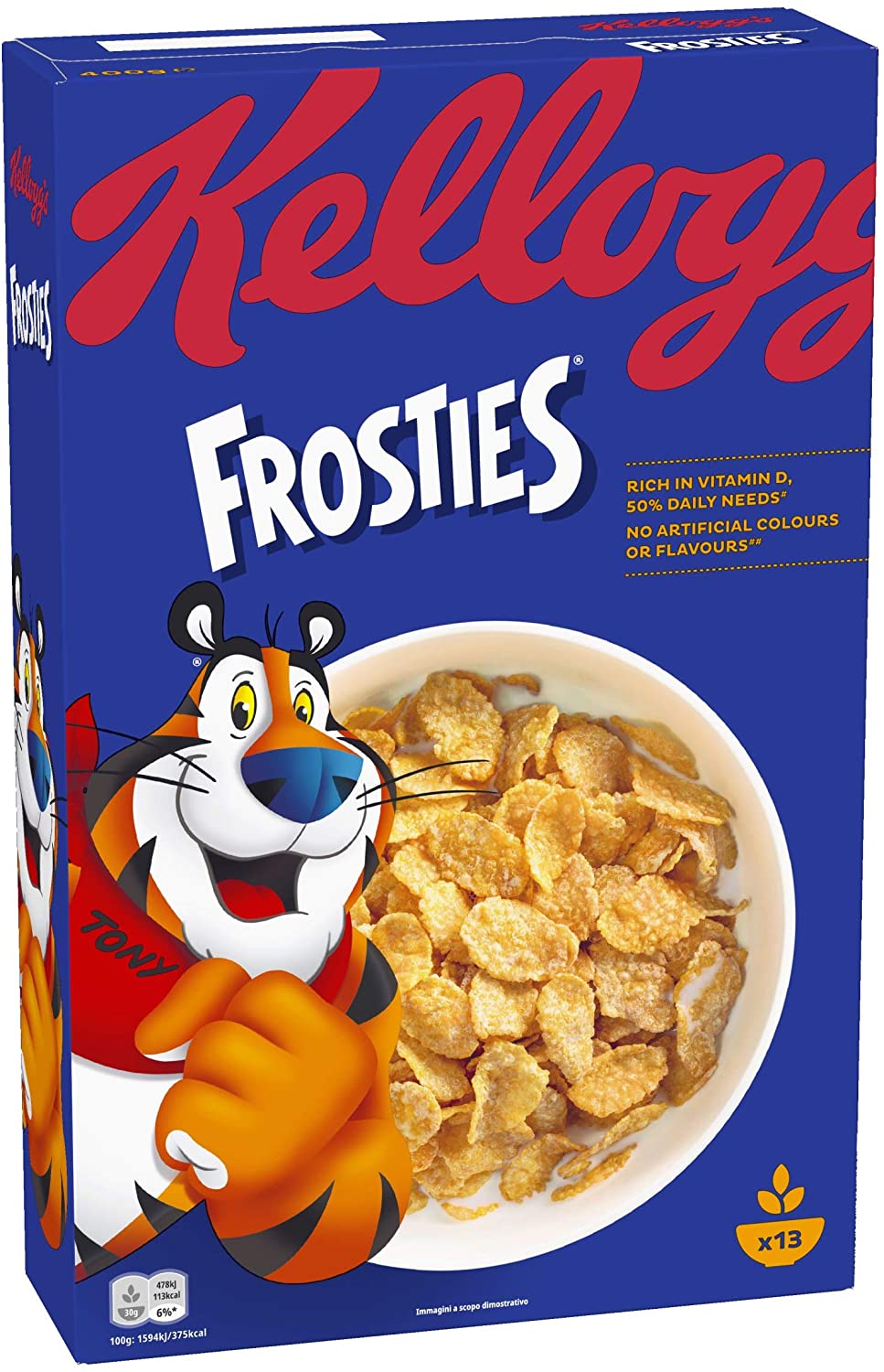 Several retailers have committed to removing cartoon characters from their packaging, but many still try and appeal to children with bright colours.

Breakfast cereals are often seen as a healthy choice when compared with croissants, pastries and breads.

Sonia Pombo, Campaign Manager at Action on Salt, explained: “Breakfast cereals can be a nutritious choice, providing a source of key nutrients to the diet but they can also contain high levels of sugar, salt, and not enough fibre.

“This can significantly contribute to raised blood pressure and increased risk of developing obesity, type 2 diabetes, and heart disease.”

She said: “With ten children out of every class of thirty leaving primary school with overweight or obesity, and the overall cost of obesity to wider society estimated at £27 billion, food companies should be forced to provide healthier choices.

“Surely Mr Javid believes every child has the right to grow up healthy?”

Three of Kellogg’s cereals have more than 8g of sugar per serving (at least two teaspoons).

These are Frosties, Krave Chocolate Hazelnut and Krave Choco Roulette. 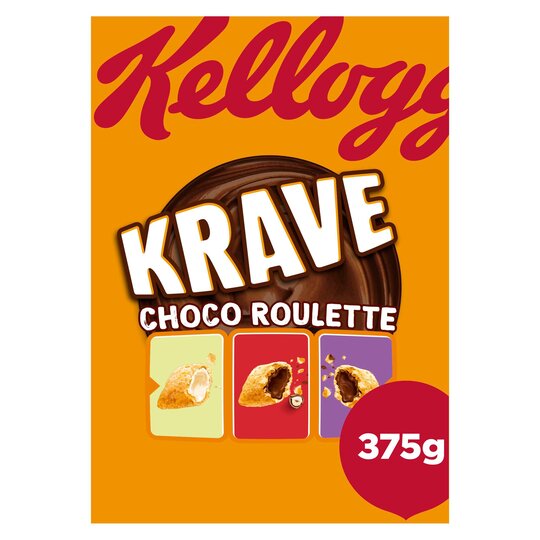 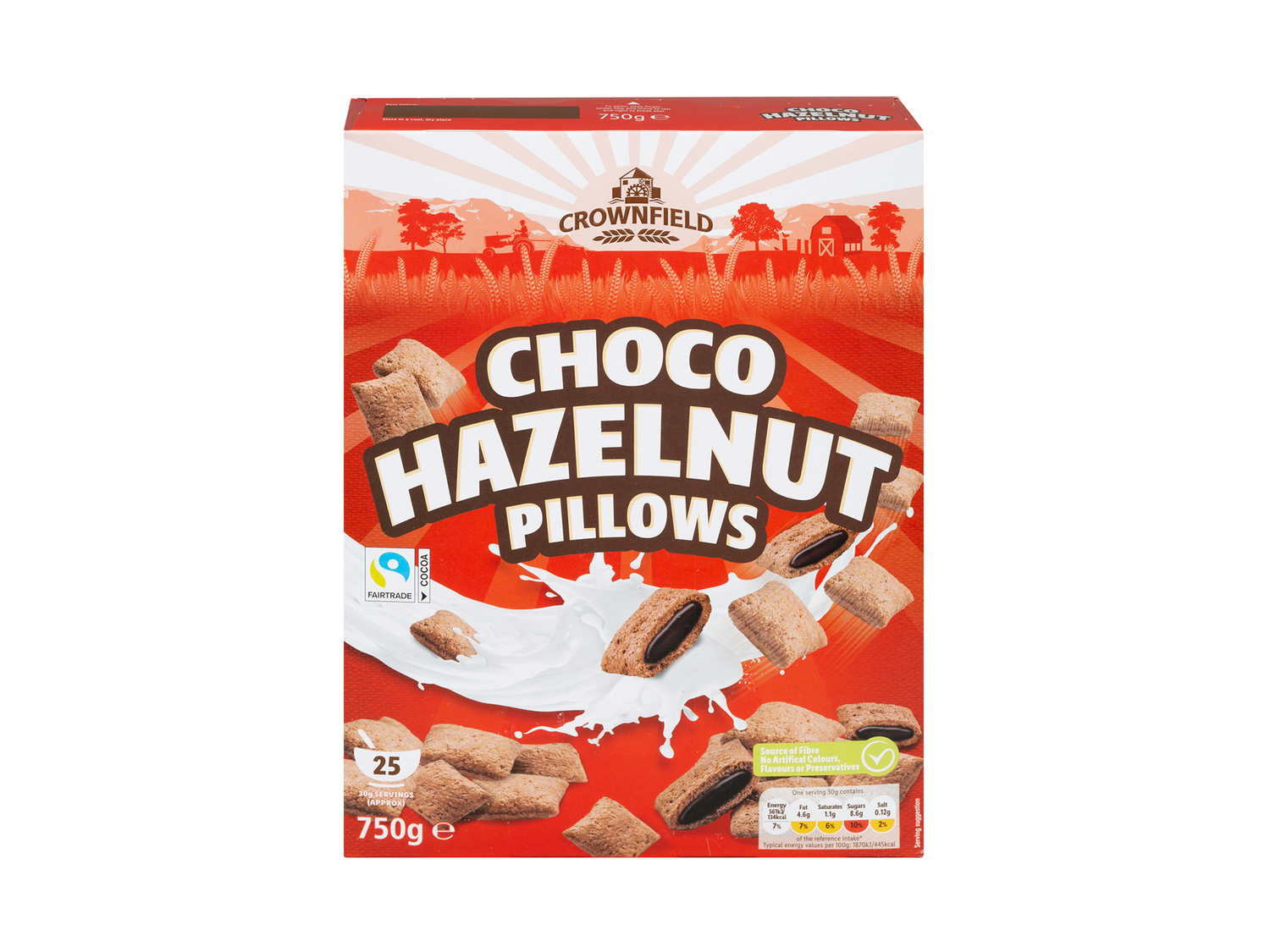 Frosties has long had a cartoon mascot called Tony the Tiger, while Krave’s marketing used to contain an animated biscuit.

Lidl and Tesco’s own versions of the chocolate filled pockets also contain around 8.5g of sugar per recommended serving size.

Meanwhile, Nature’s Path Choco Chimp implies that it’s ingredients are natural, with a cheeky monkey on the box inviting kids to try.

But the cereal, similar to Coco Pops, has 9g of sugar per serving.

It’s no surprise to see some of the chocolate-centred cereals serving up multiple spoons of sugar.

But even some that may be considered healthy – like Nature's Path Organic Gorilla Munch Corn Puffs Cereal – are hiding high sugar content (8g per serving).

But only two cereals in the almost 200 studied had low sugar, low salt, and high fibre.

These were Troo Calm Porridge + with Chamomile & Gentle Ginger and Troo Happy Porridge with Flaxseed Omega 3s and Uplifting Cinnamon.