The discussions, the Tuesday report notes, likely involved the August 31 deadline for all U.S. military presence to be out of Afghanistan – including ending the evacuation of U.S. citizens and Afghan allies.

Burns was dispatched to the capital city of Afghanistan as the administration continues to grapple with a chaotic scene at the airport and struggles to evacuate Americans from Kabul.

Biden said last week that he will keep U.S. forces in Afghanistan past the impending deadline for complete withdrawal if necessary to continue evacuating as many Americans as possible.

‘If there’s American citizens left, we’re going to stay until we get them all out,’ Biden told ABC News in an interview taped at the White House Wednesday. 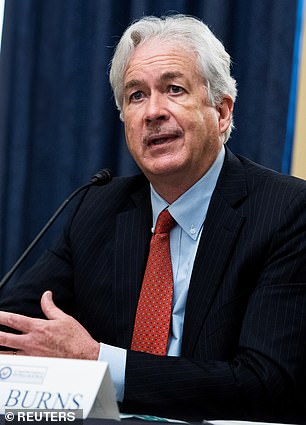 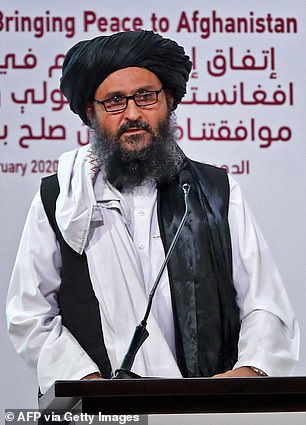 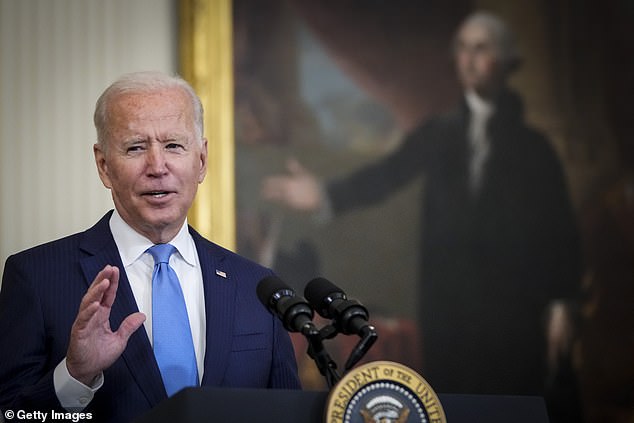 Likely discussed at the meeting Monday was the August 31 deadline for total troop withdrawal from Afghanistan. President Joe Biden said U.S. military would stay in Afghanistan past the deadline if needed to get Americans out

Taliban leaders, however, have warned of ‘consequences’ if the U.S. doesn’t keep to its August 31 deadline.

Suhail Shaheen, a member of the Taliban delegation in Qatar’s capital city Doha said Monday U.S. military continuing to evacuate past this month would amount to ‘extending occupation’ and that is ‘a red line’.

The president will join other G7 leaders on a virtual call Tuesday morning for an emergency meeting on Afghanistan after NATO begged Biden to re-think his plan to avert a humanitarian disaster.

He will then provide an update in remarks Tuesday afternoon.

The U.S. has ramped up airlifts to evacuate more than 17,000 people in a day and Biden finally ordered troops to rescue Americans outside the airport in a race against time before the withdrawal deadline.

Washington pulled off its biggest haul of evacuations since the crisis started over the last 24 hours to early Tuesday morning, with 37 military jets evacuating 21,600 people from Kabul, the White House announced.

‘Since August 14, the U.S. has evacuated and facilitated the evacuation of approximately 58,700 people. Since the end of July, we have re-located approximately 63,900 people,’ a White House official said.

Meanwhile, U.S. Special Operations rescued 16 Americans from an unspecified location around two hours outside Kabul. The Pentagon revealed it was carried out by helicopter without disclosing further details.

It comes after it emerged that the President told top commanders last week that he was wary of deploying soldiers outside the airport because he didn’t want a Black Hawk Down-style incident. Eighteen Americans were killed when their helicopters were shot down over Mogadishu in 1993 during the Somali Civil War.

Rescue efforts became increasingly urgent on Tuesday as Spain warned it would have to leave people behind and France said it would stop airlifts on Thursday – five days before the deadline.

The airport has become a relative safe haven but accessing it has proven near impossible due to Taliban checkpoints and chaos among the crowds outside the perimeter. 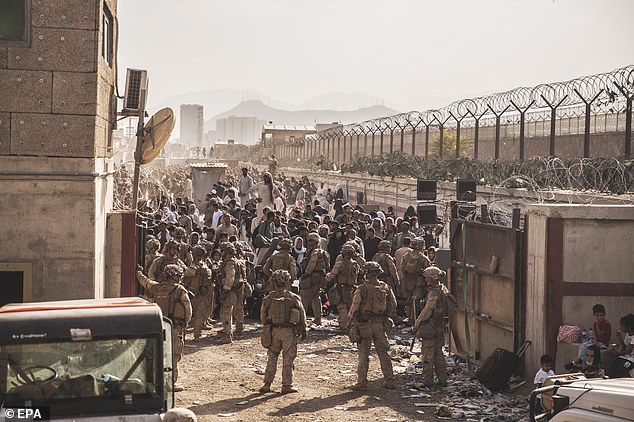 U.S. soldiers guard Kabul airport on Tuesday as thousands of desperate Afghans crowd at the gates in the hopes of fleeing the Taliban 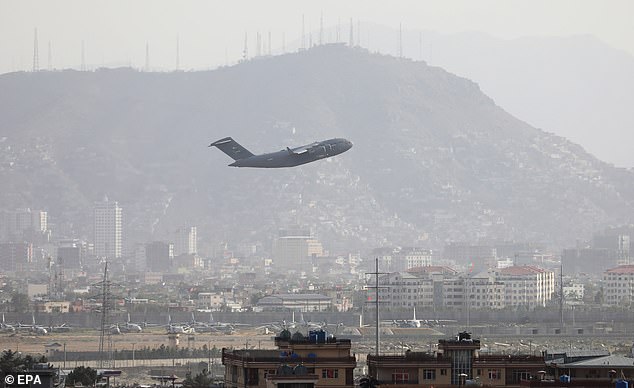 A military plane takes off from the airport on Monday. 28 military jets rescued 10,400 people in the 24 hours to early Monday. Another 15 C-17 flights over the next 12 hours brought out another 6,660.

While Biden and his administration have said the Taliban has promised safe passage to the airport for American citizens, there are reports that Americans are being assaulted as they try to reach Hamid Karzai International.

Secretary of Defense Lloyd Austin admitted over the weekend that American citizens still trapped in Kabul are being beaten by these Islamic militant fighters.

National Security Adviser Jake Sullivan said negotiations with the Taliban are continuing as the administration looks for additional ways to safely move more Americans and others into the Kabul airport.

‘We are in talks with the Taliban on a daily basis through both political and security channels,’ he said.

After more than a week of evacuations plagued by major obstacles, including Taliban forces and crushing crowds that are making approaching the airport difficult and dangerous, the number of people flown out met – and exceeded – U.S. projections for the first time.

The count on Monday was more than twice the 3,900 flown out in the previous 24 hours on U.S. military planes.

The US could release an Afghan drug lord to the Taliban in exchange for their last American hostage – but only if they provide a confirmation of life.

Drug lord Bashir Noorzai, who is a top figure in the Pashtun tribe which elusive Taliban Supreme Commander Hibatullah Akhundzada belongs, has been held in a federal prison for the last 16 years.

He travelled to the US in 2005 under the pretext of diplomatic talks, but upon arrival he was arrested by the DEA for his role in a global heroin trade.

And now, Newsweek reports that President Biden is prepared to swap Noorzai with the Taliban in exchange for Mark Frerichs, who was the last American to be taken hostage by the group.

Frerichs was taken hostage by the Taliban in January last year by a group believed to be associated with the Haqqani network – who are a militia group positioned on the Afghanistan-Pakistan border and who are aligned with the Taliban.

Speaking to the publication, a government official, who wished to remain anonymous, said: ‘We are eager to explore ways to bring Frerichs back. But these explorations are predicated on receiving a recent proof of life. The bottom line is that any progress moving forward lies in receiving a proof of life.’

A swap deal involving Frerichs and Noorzai has been welcomed by Charlene Cakora, who is Frerichs’ sister. 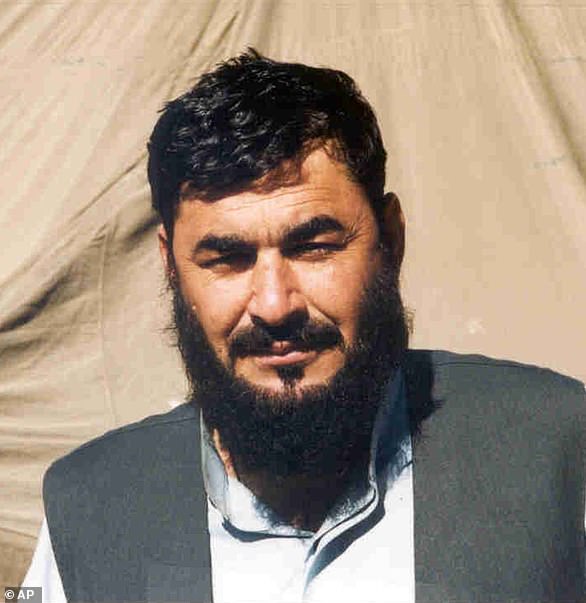 Drug lord Bashir Noorzai (pictured), who is a top figure in the Pashtun tribe which elusive Taliban Supreme Commander Hibatullah Akhundzada belongs, has been held in a federal prison for the last 16 years

She said in a statement sent to the publication that although she didn’t like the idea of letting Noorzai go, it was worth it to have her brother released.

And she urged President Biden to move quickly to ensure a deal can be struck.

However, a former senior U.S. official has said that the foundation of any hostage swap is a solid proof of life which is ‘itself is sort of its own art form’.

The potential hostage swap comes as the chair of the House Intelligence Committee warned that President Biden is ‘unlikely’ to meet his August 31 deadline to evacuate US citizens and their allies from Afghanistan. 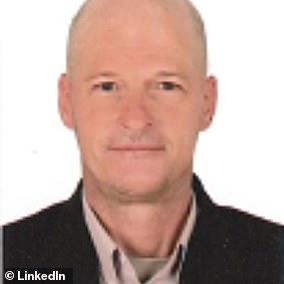 Now, reports suggest the President is considering the possibility of trading Noorzai with the Taliban in for Mark Frerichs, who was the last American hostage taken by the group

Adam Schiff made the grim prediction after an intelligence briefing Monday evening, as the Taliban rejected a mooted extension to the withdrawal date.

Schiff said a full evacuation was ‘possible’ but ‘very unlikely given the number of Americans who still need to be evacuated, the number of SIV’s, the number of others who are members of the Afghan press, civil society leaders, women leaders.’

‘Nonetheless, given the logistical difficulties of moving people to the airport and the limited number of workarounds, it’s hard for me to see that being fully complete by the end of the month. And I’m certainly of the view that we maintain a military presence as long as it’s necessary to get all U.S. persons out and to meet our moral and ethical obligation to our Afghan partners.’

He added: ‘Given the number of Americans who still need to be evacuated, the number of SIVs, the number of others who are members of the Afghan press, civil society leaders women leaders, it’s hard for me to imagine all of that can be accomplished between now and the end of the month,’ he said.

Who is Bashir Noorzai?

Haji Bashir Noorzai is a drug lord and financial backer of the Taliban.

In 2005, he flew from Dubai to the US under the pretext of diplomatic talks.

However, upon his arrival in New York City, he was arrested by the DEA for his role in the establishment of a global heroin trafficking operation – the funds of which had been helping the Taliban.

After a trial, he was sentenced to life in a US federal prison.

a, cia, director, Had, secret, the
You may also like: