More than 100 anti-vaccination demonstrators gathered at the outer-Melbourne electorate office of the federal Health Minister on Saturday to launch a “democratic political movement” founded on pushing conspiracy theories and reclaiming a vague notion of freedom they say has been stolen.

Dozens of police were also in the shopping centre carpark outside Greg Hunt’s Somerville office but there was no violence or repeat of last Saturday’s city protest that blocked traffic, defied health orders and ended in 20 arrests. 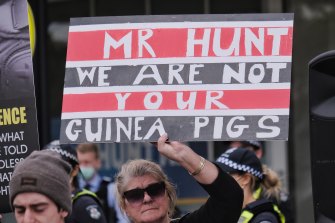 Rally speakers variously accused Mr Hunt of being a stooge of China, committing “public health terrorism” and being responsible for what they have incorrectly, even if deliberately, interpreted as forced and fake COVID-19 vaccinations.

The movement, apparently soon to be a political party, does not yet have a name.

The public action over the last two weekends – complete with conspiracy theories and untruths – appears to be only the combative fringe of more softly-spoken vaccine hesitancy.

However, a new survey from the University of Melbourne found one in four Australians were still either against or unsure about receiving COVID-19 vaccinations.

Three in four said they were likely or very likely to accept.

The Somerville rally was organised by Reignite Democracy Australia, which claims on its website to be neither anti-vaccination nor pro-vaccination, but “pro-choice”. 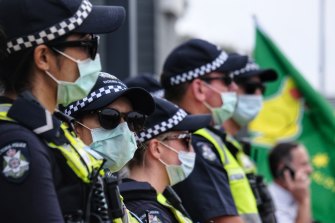 Police guarding the office of Greg Hunt during the rallyCredit:Luis Enrique Ascui

The speakers and crowd, which waved placards emblazoned with “Jesus please help us”, “I am not your experiment” and other anguished slogans were decidedly anti.

Among the nebulous anti-establishment messages from speakers (“there is virtually nothing to distinguish us from [Communist] China”), common themes included peddling fear about COVID-19 vaccinations and reigniting anger about restrictions, most of which have been lifted.

RDA founder Monica Smit told the cheering crowd that newly independent MP Craig Kelly, who she claimed to speak to semi-regularly, “loves what we’re doing” and should be prime minister.

She also said she was working for the cause full-time. Next to the stage, “Freedom Fighter” T-shirts were a hit for $30 each.

Health experts have urged Australians to get their information from credible medical sources and not groups spreading disinformation on social media sites or at public demonstrations like that outside Mr Hunt’s office.

Mr Hunt has repeatedly said the vaccine will not be forced upon Australians.

However some high-risk workplaces, such as aged-care homes, may be able to insist on vaccinations by using existing laws that allow businesses to issue reasonable orders to employees.

This is nothing new. In 2019, Victorian frontline hospital employees were told they needed to receive flu vaccinations in order to keep working in certain settings.

Businesses may also be able to list COVID-19 vaccination as a condition of entry and on Friday the management of Trinity College, a residential accommodation provider for the University of Melbourne, said students would be asked to sign a “commitment to be vaccinated.”

Saturday’s protest comes a week after police arrested 20 people at an anti-vaccination protest in South Yarra.

More than 500 people attended that event to hear speeches about the “non-existent pandemic” which, according to speakers and the hooting crowd, was a fabrication of governments, big pharmaceutical companies and the mainstream media.

The protesters gathered in Fawkner Park before blocking traffic along Toorak and St Kilda roads as they marched and chanted for “freedom”.

At the time, directions from the Chief Health Officer meant no more than 20 people could gather outside.

Austra, combative, Fringe, of, the
You may also like: