Follow
Home » World News » The COVID Cup: In tiny Harrow, a race to get vaccinated

The COVID Cup: In tiny Harrow, a race to get vaccinated

About 200 people live in Harrow, a Wimmera town nestled in a valley just east of the South Australian border. But they don’t all live in the main drag.

“We’re about the same size as Melbourne. But not quite as densely populated,” grins local farmer Tom Houlihan. 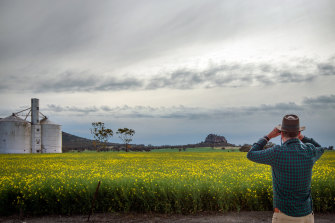 Harrow stretches for miles, but even without Melbourne’s COVID-19 vaccination centres they’ve got 90 per cent of the eligible population double-jabbed.Credit:Christine O’Connell

He maps the place out in the air. “Harrow stretches from Gringegalgona across to Tarrayoukyan, and Nareen – that’s Malcolm Fraser’s farm – and then you head up to Harrow through Pigeon Ponds, and then you go out south-west to Kadnook, and then you head north to Douglas and Clear Lake.”

Good country for sheep and cattle, and cropping up north, Mr Houlihan says. Tough country to get people vaccinated. The trip from Tarrayoukyan to the local clinic is 60 kilometres one way and there’s no public transport.

If there was a COVID-19 outbreak, people here would be in strife.

“Because we live where we live … we know the level of support and care we would require if we got COVID, you know, we’re a long way from the big metro centres with high levels of hospital care,” says Birchip local Fiona Best. 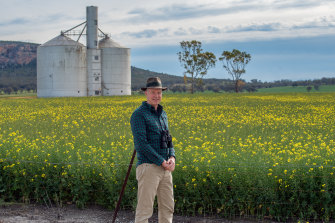 But Harrow’s now got vaccination rates that put much of Melbourne to shame: 90 per cent double-jabbed. They are not even the best in the region. Birchip, which claims to be home to the famous Mallee Bull and Australia’s best vanilla slice, has reached 94 per cent double-dosed.

How? Hardworking local GPs, for one thing. But here’s a less-known tale: one of the nation’s top vaccine scientists lives around here, and he’s absolutely determined none of his neighbours miss out on a miracle of modern medicine. By hook or by crook.

Until a few months ago, Dr Rob Grenfell was director of health and biosecurity at the CSIRO. His team played a key role developing COVID-19 vaccines from AstraZeneca and the University of Queensland.

Dr Grenfell grew up in an agricultural college just outside Horsham and now lives in Natimuk. He’d helped develop vaccines but he could see they weren’t getting where they needed to be. He was particularly worried about the tiny town of Tempy, where just 37 per cent of people had had a first dose.

“When we talk about 80 per cent coverage, who is the 20 per cent that aren’t covered? It’s generally the people who should be covered,” says Dr Grenfell. “We need to protect our community as strongly as possible because everyone here knows how challenging it is to get healthcare out here.”

So Dr Grenfell decided to do something about it. He told his CSIRO bosses he was going part-time. Then, with the local public health unit, he began working to identify pockets of people who hadn’t yet been vaccinated or who were disengaged with the health system and actively reached out to them.

And then there was his big idea: the Cup.

“Having grown up in the area, one thing I did know is there is ferocious competition between towns. I went through a primary school of 15 kids. The nearby town, we had to beat them,” says Dr Grenfell.

That’s how the COVID Cup was born. ‘The race that starts the nation’, they’re calling it. Dr Grenfell roped in his mate, former sportswriter Peter Miller, to help convert vaccine statistics into racing copy and convinced The Weekly Advertiser to print it.

Communities out here need to care for themselves, says the paper’s editor Dean Lawson.

“It’s the great, neglected part of Victoria,” he says. “The response is a real ‘you’ll be right attitude’ coming out of Spring Street.”

The paper, circulation 22,500, has now covered the race’s bumpy start and a steward’s inquiry after (lighthearted) allegations of cheating. They’re now they’re in the home stretch as the field races to 80 per cent double dosed.

And it seems to be working. Birchip, Kaniva and Harrow are all at more than 90 per cent double-dosed. Compare that to the City of Melbourne, where just 67.4 per cent of eligible people are double-dosed.

“Birchip are leading the competition. But print this: we’re not losers here in Harrow,” says Mr Houlihan. “We’re coming after Birchip.”