The dangers of collective shame

Before I cast the thousandth stone against the most egregious lockdown violations, and explore the fraught predicament of ethnic and religious minorities during plague time, hear my confession. Or at least the closest thing to a confession an atheist Jew can muster.

Last weekend, the glorious sunshine and whiff of spring went to my head, in what was clearly a citywide contagion. 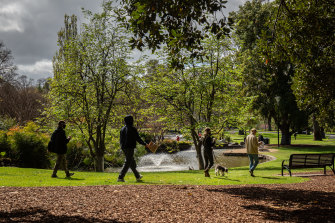 People out and about in Melbourne.Credit:Scott McNaughton

While I didn’t picnic outdoors or pub crawl on the footpath, I exercised unmasked with a double-jabbed friend on Saturday, and in the afternoon visited my 93-year-old father. Citing a “care-giving” loophole in the regulations, I ventured into the house.

I didn’t need the collective punishment of a two-week lockdown extension, nighttime curfew and playground ban to feel ashamed of my carelessness. By Saturday night, when the list of coronavirus exposure sites included Coles Balaclava, my idiosyncratic local with a kosher bulletin board and where I’d shopped at the critical time a week earlier, I was already stricken with shame.

As I waited hours in the testing queue the next day (I was negative, thank Jehovah), I found myself contemplating shame itself; how corrosive it can be, how hard it is to get the dosage right when people do wrong.

And how historically persecuted people internalise more than their fair share of it.

The by-now infamous, and – after whopping police fines – hideously expensive, engagement party at which 69 people gathered last week was shameless.

The milieu was the Orthodox Jewish community in the suburb we Jews jokingly call “the ghetto”. But in this instance we’re not talking about some religious sect with a medieval frame of reference whose members need public health messages delivered via trusted interlocutors with the man upstairs.

No, the people at the infectious engagement party are urbane in sensibility, affluent and educated. Hence, the groom-to-be’s much-savaged quip about the party being “group therapy”, hence the two medical professionals in the house.

The sense of entitlement on display is perhaps reminiscent of the Aspen set who swanned into the country last March and immediately hit the social scene, leaving coronavirus in their wake.

At a human level, I hope the families and guests in question will find a path clear of the traumatic fallout, an outcome best achieved by wholeheartedly co-operating with contact tracers, as they are reportedly doing. Maybe sometime soon I might wish what seems an otherwise sweet couple Mazel-Tov.

But the brazen disregard for the public good, the sheer malice aforethought this lawbreaking entailed, leaves me so lost for words I can only defer to former Victorian Labor MP Philip Dalidakis who said the behaviour rendered him “speechless,” or Daniel Andrews’ inclusive description, a “shitty” choice.

In a slightly different vein, the Rabbinical Council of Victoria urged rabbis and congregations to comply with public health orders and “unreservedly” condemned illegal gatherings, including alleged prayer meetings in private homes, “which bring risk and shame (my emphasis) to the entire community”.

I assume the reference to the “entire community” means the entire Jewish community. In which case the council is implying the misdeeds of some Jews stain all Jews. 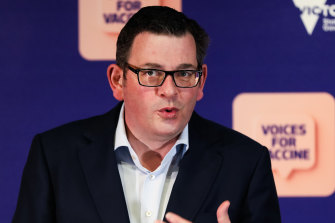 “If you’re angry,” tweeted the ABC’s Raf Epstein on Sunday, “believe me you are not as angry as almost all of the Jewish community.”

Boy, was he right. The shaming of the offenders in Jewish spaces online was so feverish, the overcompensation so intense, my skin felt singed from the briefest dip into the pit.

Much of the unplugged vitriol was understandable, justified or simply bile-as-usual on social media at a time when people are on a hair trigger.

But I also detected a distinctive ethno-religious theme springing from this idea that some Jews had let the side down.

Every ethnic minority brings its own baggage to Australia’s multicultural landscape. In the Jews’ case that baggage is the scriptural burden of being God’s “chosen people” coupled with centuries of oppression in host countries. This history has bred unconscious fears among Jews that their right to belong in Christian societies is conditional on good behaviour.

So, here’s a rule of thumb: anti-Semites, Islamophobes, bigots of all stripes are always looking for a pretext to unleash their hatred. It should depress everyone and surprise no one that Jew-haters are spewing vile prejudice and death threats in the aftermath of engagement-gate.

But nor should well-intentioned community leaders, or anyone else, tacitly encourage the haters by peddling notions that ethnic minorities collectively bear the shame of an errant few.

If the lawbreakers must be shamed they should be shamed as Melburnians.

Because too many of us have been bingeing on liberties, and now we’re nursing one hell of a collective hangover.

Julie Szego is a regular columnist.

Collective, dangers, of, sham, the
You may also like: