The epic 23-year battle to destroy termite colony that invaded Britain: When the ‘terrorists of the insect world’ were found on our shores, experts were horrified. Finally, in a world first, they have been wiped out

One day in 1994, a pensioner named Aurea Thornycroft noticed mysterious insects chomping through the walls of her beach-side bungalow on the hills above Saunton Sands, near Barnstaple, in Devon.

When the local pest controller peeled away the wallpaper inside her conservatory, he found it teeming with strange, white, ant-like creatures that he’d never seen before. Each measured roughly half a centimetre in length.

‘They were found in two timber-frame walls, heated by pipes,’ the man later recalled. ‘The timber was damp and the combination of heat and moisture has produced the perfect micro-climate for the insects. They have been there for years.’

But it was not until several months later that it emerged Mrs Thornycroft’s chalet-style holiday residence was the scene of a bona fide ecological emergency: Britain’s first ever subterranean termite infestation. 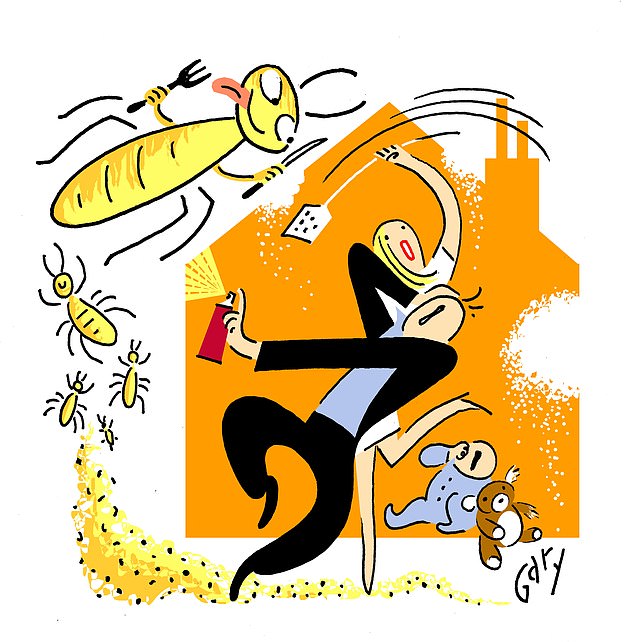 Homeowners across America and Europe spend billions each year trying to put right the damage caused by the small but voracious creepy-crawlies, who feast on the timber in buildings

No one knew where the creatures had come from, though initial speculation (later debunked) was that they’d arrived via a pot plant imported from the Canary Islands.

However, their usual habitat extends across warm parts of the globe, where they are found in a range of habitats (including forests and grassland), and live in vast colonies, existing by devouring cellulose, particularly from fallen wood.

In the wild, termites play a crucial role as ‘soil engineers’ helping to prop up the food chain. But when they rub up against mankind, or more specifically the villages, towns and cities we inhabit, they can transform into a terrifying pest, known colloquially as the ‘terrorists of the insect world’.

Homeowners across America and Europe spend billions each year trying to put right the damage caused by the small but voracious creepy-crawlies, who feast on the timber in buildings.

In places such as Paris and Madrid, they have, in recent decades, wreaked havoc, removing structurally crucial wooden beams and leaving entire floors of historic properties in danger of collapse.

The real problem, as experts examining Mrs Thornycroft’s bungalow soon realised, is that, once properly established, a subterranean termite population is almost impossible to eradicate, no matter how many millions (yes, millions) you succeed in killing. 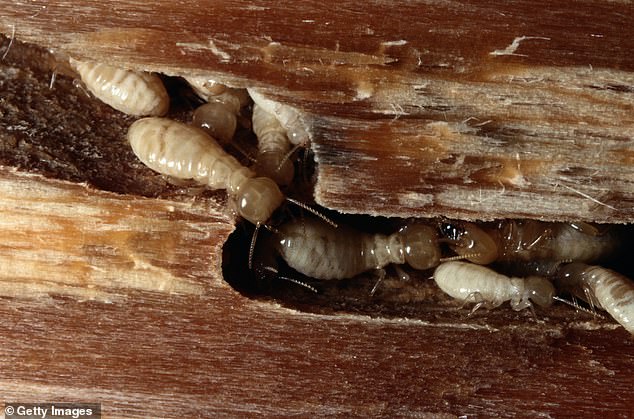 A single colony can reach seven metres underground, across an area the size of two swimming pools (stock image)

A single colony can reach seven metres underground, across an area the size of two swimming pools.

And even if pest controllers think they’ve wiped out the lot, should they leave behind just a tiny population (sufficient to fill half a small matchbox) the tenacious creatures will not just return, but swiftly spread far and wide.

So, in a bid to save not just North Devon but the entire nation from this apocalyptic home-crushing scenario, in 1998 the government launched a bold scheme called the UK Termite Eradication Programme.

Its stated aim: to use state-of-the-art techniques to contain and then remove these alien invaders from our green and pleasant land.

So began a 23-year saga involving dozens of scientists and many hundreds of thousands of pounds.

And last week, the grizzled team behind it finally declared victory: no termites have been found in Saunton for ten years, meaning Britain is, once again, officially termite free.

‘We are confident that eradication has been successful,’ says Dr Ed Suttie, who has run the project since 2003. ‘Nobody has ever done this anywhere in the world. It’s a complete first.’

The result is not just a triumph for British innovation, but also for the bulldog spirit of Dr Suttie and his pioneering team, who overcame setbacks and false dawns that would have destroyed less bloody-minded bug busters. 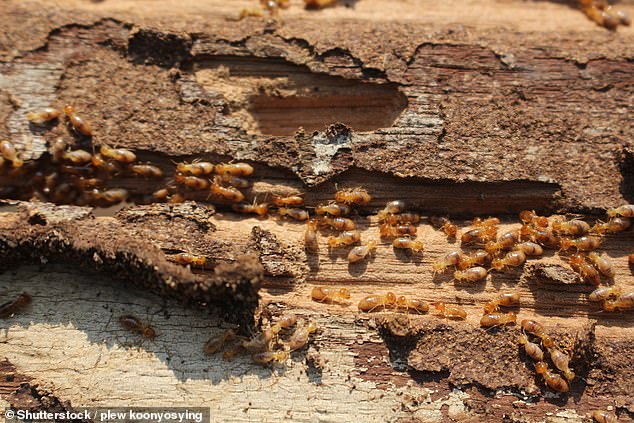 In places such as Paris and Madrid, they have, in recent decades, wreaked havoc, removing structurally crucial wooden beams and leaving entire floors of historic properties in danger of collapse

Perhaps the most soul-crushing was in 2009, when a routine six-monthly inspection revealed a handful of termites under a paving slab on Mrs Thornycroft’s patio.

It was the first time in eight years that they’d been spotted and the discovery shattered the cautious optimism of the team — who were beginning to believe that the colony had been destroyed.

‘When we arrived, the soil was alive with the things,’ recalls Dr Suttie. ‘If you dug your hands in, they were everywhere. We were quite quickly able to reduce the numbers substantially. But achieving complete removal has been a labour of love.’

The tenacity of the termites revolves largely around their lifestyle, since this particular species — the Reticulitermes grassei — lives deep underground, making it impossible to control them by simply dousing an infected area with pesticide, or even destroying a building they have infested.

‘Someone initially asked, “Why can’t you just burn the house down?” ’ explains Dr Suttie. ‘Well you could do that, but the things would just end up coming back again.’ 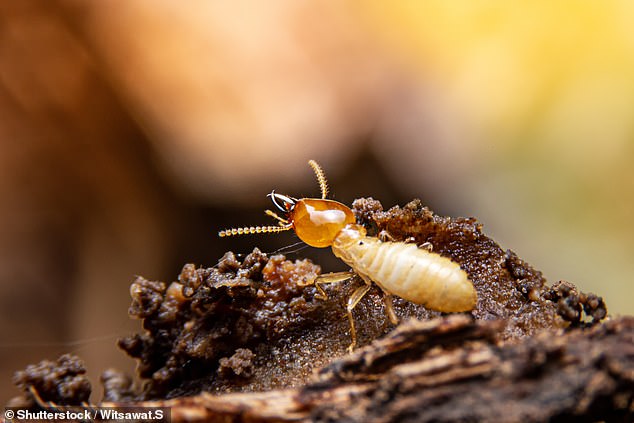 So, in a bid to save not just North Devon but the entire nation from this apocalyptic home-crushing scenario, in 1998 the government launched a bold scheme called the UK Termite Eradication Programme

Another potential plan — to remove thousands of tonnes of topsoil and dump it in the sea — was also discounted, this time due to impracticality.

Instead, the team designed a novel scheme that revolved around a chemical called hexaflumuron, a so-called ‘insect growth regulator’ which prevents young termites from maturing.

If they could persuade foraging insects to carry the stuff back to the colony, then its reproductive cycle would quickly be destroyed.

Wooden bait stakes were buried at some 695 sites within a 500- metre radius of Mrs Thornycroft’s bungalow. The ones that were eaten were then replaced with plastic tubes containing hexaflumuron.

But things did not initially go entirely according to plan. In a development that sparked headlines about ‘gourmet’ termites, it initially emerged that the insects disliked the taste of the chemical. So to persuade them to tuck in, Dr Suttie’s team doused the bait sticks in a type of fungus extract that gives off a pheromone termites find particularly attractive.

Coincidentally, the same pheromone is found in the blue ink used in ballpoint pens.

At times, the experience was also rather traumatic for both Mrs Thornycroft — who is now in her late 90s — and the residents of a neighbouring property, which was also found to be infested.

At the start of the project, they were asked to stay away for at least three months, and banned from mowing their lawns in case it stopped the insects taking the bait. Until last month, the properties were the subject of a ‘restriction of movement’ order issued by the Forestry Commission, which banned the removal of soil or wood from the area. 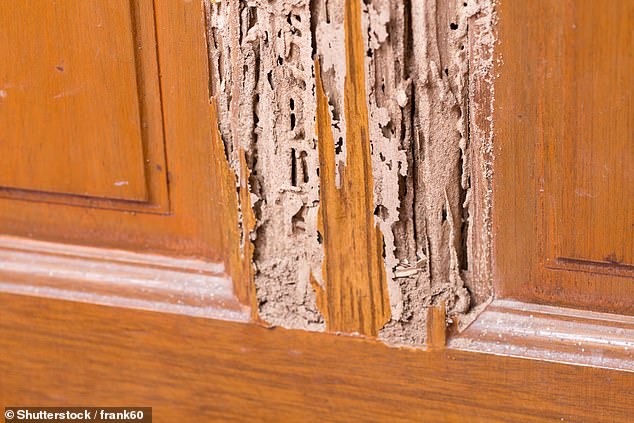 After the 2009 setback, with her property effectively condemned due to structural damage, Mrs Thornycroft applied for permission to demolish it and start again.

But planning permission was denied due to the risk of spreading any remaining insects following an intervention from the then Communities Secretary Eric Pickles, who cited the ‘potential catastrophic economic, environmental and social consequences’ of such a development.

Mrs Thornycroft was, however, allowed to build a new annexe in the grounds.

Over time, thankfully, the tide finally began to turn on Britain’s only termite colony and six-monthly inspections from 2011 onwards drew a blank.

With the things now officially extinct in the UK, attention has turned to ensuring the insects never become established here again.

To that end, £19,000 of government funding was announced last week. It will be used, in part, to create an instruction manual to guide authorities in how to eradicate any future bugs that might turn up. 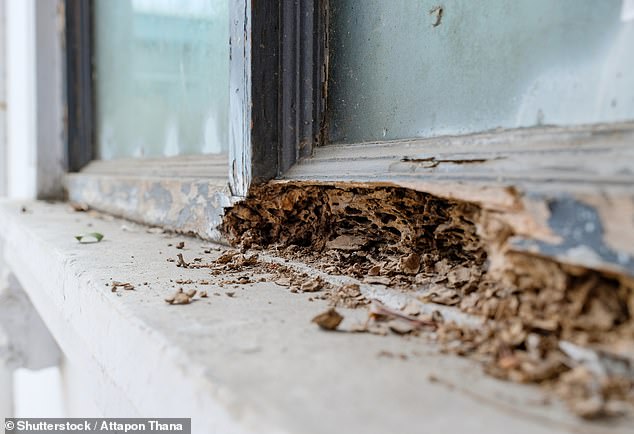 And last week, the grizzled team behind it finally declared victory: no termites have been found in Saunton for ten years, meaning Britain is, once again, officially termite free

After all, the chances of such a development are high: DNA analysis has shown Saunton’s termites are likely to have originally hailed from the South of France, suggesting they were probably imported on timber packaging.

Dr Robert Verkerk, who headed the scientific team since the start, believes the only reason termite colonies are not yet established in the South-East (where most of our trade arrives in Britain) is that they dislike the clay soils.

‘In Devon, the soil is much sandier, and the weather is also milder, making it more suitable,’ he says. ‘It’s definitely likely to happen again, I think, because of human vectoring — in other words, the way we transport things around the world. If you look at how they have spread through Europe, they follow the canal and road networks. In many ways, we’ve so far been very lucky.’

With travel and trade increasing with each passing year, we must therefore hope that future termite arrivals prove equally powerless in the face of hexaflumuron.

If not, then, for Britain’s homeowners of the future, it’ll be what you might call a bug’s life.

Father, 41, dies after crashing his e-scooter into a tree