The face of the COVID pandemic has fundamentally changed in Victoria

Previously healthy patients in their 40s and younger are filling Victorian hospital wards, as the state encounters a new pandemic of the young and unvaccinated.

New data provided to The Sunday Age has revealed the drastically changing face of coronavirus in Victoria, with 61 per cent of those hospitalised in the state’s latest outbreak aged 40 or younger, compared to about 20 per cent in 2020. 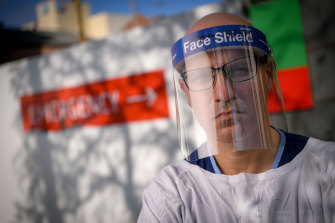 As parents fall ill at higher rates and the Delta strain spreads through extended families, asymptomatic children with COVID-19 are being taken in at a Melbourne hospital because no one in their family is well enough to care for them.

Doctors are also concerned about the number of pregnant women who are catching the virus. They say many of the people falling seriously ill with the disease in the state’s third wave have never been in hospital before and do not have underlying health conditions, a contrast to 2020 when patients tended to be older and with more complicated medical histories.

Data from the Royal Melbourne Hospital, which treated about 150 COVID patients in wards from July to mid-September, put the median age of those needing hospitalisation at around 46. Last year it was over 60 years and many patients were infected in nursing homes outbreaks.

“Most cases are otherwise well young people and that median age, between 40 to 50 years old, who are getting very sick,” said Dr Kasha Singh, an infectious diseases physician at the Royal Melbourne Hospital.

She said the typical patient was now a young person who had not been vaccinated, who had been sick for a few days and was finding it increasingly difficult to breathe.

“Other family members being infected is really common.”

The Victorian Health Department confirmed that a number of unaccompanied children who had COVID had been cared for at Northern Hospital while their parents were hospitalised.

The children have been “asymptomatic” but require a safe place to stay. Similar situations have been seen in NSW and overseas.

More than 360 people who have been hospitalised with COVID in Victoria since August have been aged in their 40s or below.

Doctors who look after the sickest COVID patients in Melbourne are also looking after a higher proportion of younger people. Almost 50 per cent of those admitted with coronavirus to Victorian ICUs between August 4 to September 17 were aged 40 or younger. That included two children under 10 and 28 people in their 20s and 30s who required ventilation.

“I know in our unit, since the outbreak, we haven’t had a patient that’s been vaccinated yet,” said the director of The Alfred hospital’s intensive care unit, Steve McGloughlin.

“Some of our patients have been in ICU for a long time; I suspect it was before the opportunity to get vaccinated for some.” 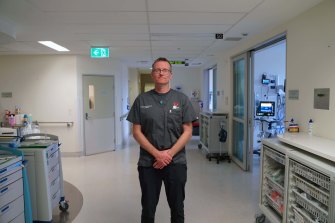 On Friday almost 90 per cent of the 207 people hospitalised with COVID were unvaccinated. Only two people were fully vaccinated.

Dr Singh said some patients she was seeing at the Royal Melbourne Hospital had booked in for a vaccination, but caught COVID in the interim. Then there are others who had been reluctant – including people who had believed they wouldn’t get sick because they were healthy and had never been in hospital before.

She said at the extreme, there were those that did not believe in coronavirus, even after they caught it.

Doctors are still seeing COVID patients with underlying health conditions, such as diabetes, asthma and chronic kidney disease, but Dr Singh said they were now in the minority.

“Difficulty breathing is the primary thing we are seeing,” she said.

In 2021 he said it was more varied, but the average patient was now a few decades younger, with fever and lethargy. They also have similar back-stories. It will emerge that they haven’t been vaccinated, and many are coming from the same geographic area, the northern suburbs of Melbourne, where there are more than 2500 active cases.

He said some people were presenting with non-respiratory symptoms such as abdominal or chest pain, or a headache. People also had a tendency to deteriorate quickly, making doctors sometimes second-guess whether it was safe to send people home.

“The capacity of patients to quickly go from mildly to severely unwell makes us a bit more hesitant to discharge people home,” Dr Parnis said.

It’s still unclear whether the Delta strain of the virus, which is significantly more infectious than others, is also more dangerous to the younger people catching it.

A number of studies, including a recent analysis of over 40,000 English COVID patients, do suggest it could be causing more severe illness in the unvaccinated, but infectious diseases physician at the Australian National University Sanjaya Senanayake said these observational studies had limitations. For example if the criteria for hospital admission had changed that could influence the results.

COVID-, face, of, Pandemic, the
You may also like: