The many political allegiances of Elon Musk

Elon Musk recently said that a special election in Texas this year was the “first time I ever voted Republican.” But his political evolution, according to a Yahoo Finance review, isn’t quite so simple.

The Tesla (TSLA) CEO’s political views and allegiances have moved back and forth across the political spectrum in seemingly haphazard ways many, many times over the years.

While 2022 may be the first time Musk says he marked his ballot for a Republican, he recorded his first federal political donation back in 2003. That $2,000 check went to Republican George W. Bush, according to Federal Election Commission records.

In the intervening years, Musk has signaled support for a dizzying array of figures ranging from Barack Obama to Marco Rubio to Andrew Yang to Margaret Thatcher to even Kanye West. Musk’s history suggests that while he may have currently allied himself with Republicans, that could change again in a hurry.

It’s a point underscored by Musk himself in recent days when — even as he allies with the GOP — he is feuding with Donald Trump and recently asked the former president to “hang up his hat & sail into the sunset.”

Musk is also of course gearing up for a court fight with Twitter (TWTR) as the social media company prepares to go to a Delaware court to force Musk to stick to his agreement to buy it for $44 billion. Musk’s political leanings have become a flashpoint in the saga, especially after Musk suggested he might let Trump reinstate his account if the deal went through.

‘Half Republican, half Democrat, if you will’

Musk’s 2003 check to Bush came after a few donations to local politicians in California who represented both parties. As the SpaceX CEO became more interested in national politics, he was soon taking the same approach. In 2004 he sent along some money to John Kerry, Bush’s opponent.

It was also in 2004 that Musk become involved with Tesla, rising to become the electric car-maker’s CEO and a prominent face for clean energy.

Musk’s political positions have belied any easy categorization. At various points over the years, Musk has called himself a socialist (jokingly, he says), while he also says that he opposes government subsidies (after his company benefited handsomely from them). In 2020, he waded into social issues by tweeting that “pronouns suck,” which his then-partner said represented “hate.”

No more political comments for me now that I’ve shot off both my feet.

Perhaps the only constant over the years is Musk’s desire not to ally himself permanently with any political ideology. He described himself as “half Republican, half Democrat, if you will” in 2014 and. In 2021 he claimed “I would prefer to stay out of politics,” especially when it came to hot-button social issues.

For many years, largely due to his position atop the country largest EV marker, Musk was seen as more of an ally of Democrats even as he — and Tesla’s own political action committee — continued to fund politicians in both parties.

“In order to have your voice be heard in Washington, you have to make some little contribution,” Musk told HuffPost in 2013. 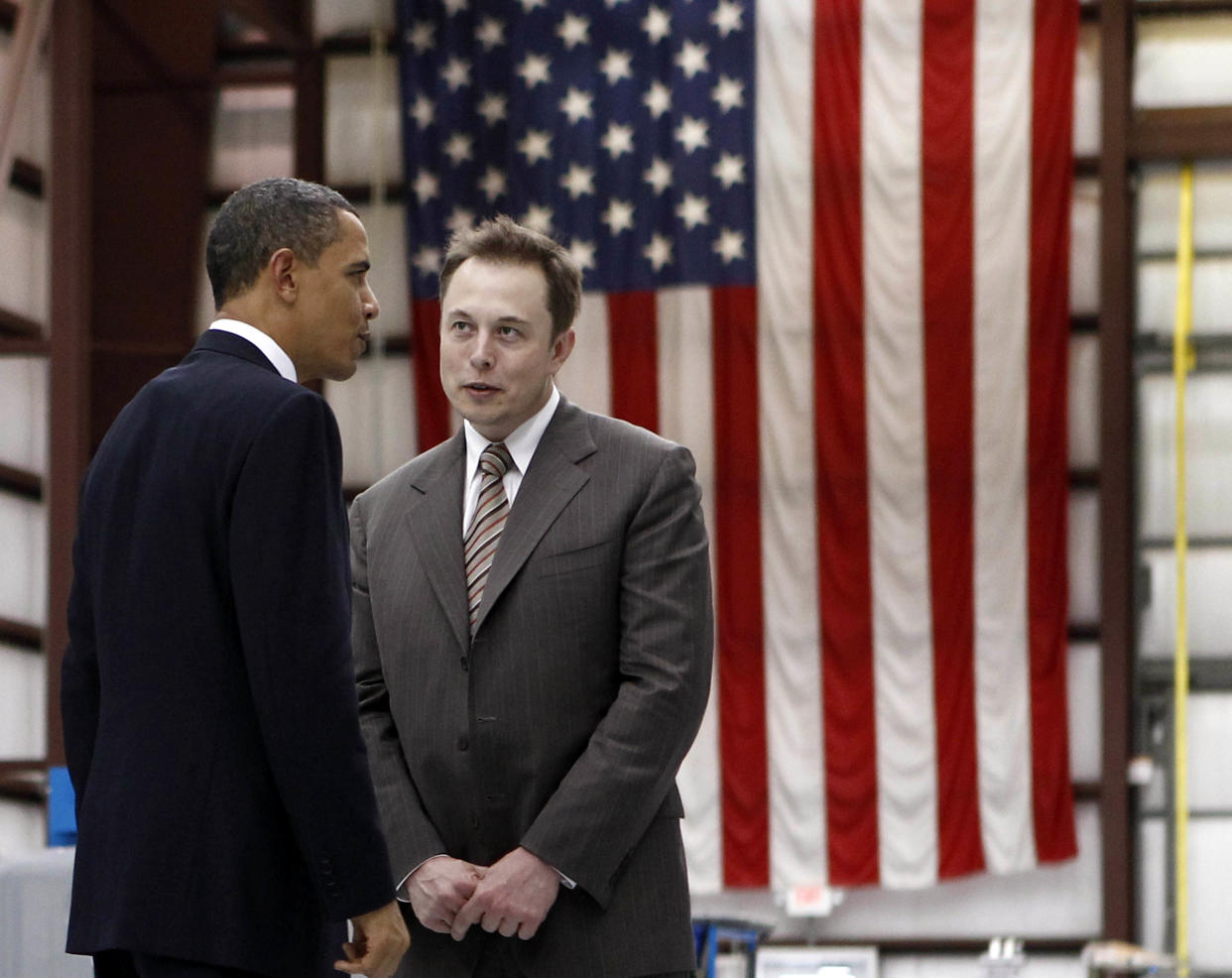 Musk continued to insist he was a moderate even as he publicly endorsed Hillary Clinton in 2016, saying that Trump “doesn’t seem to have the sort of character that reflects well on the United States.”

After Trump’s election, Musk’s relationship with the White House was hot and cold.

Musk visited Trump Tower after Trump’s victory and then become one of the first visitors to see the newly inaugurated president at the White House. He was there on Jan. 23, 2017 for a meeting of manufacturing executives. Musk was back for a second visit just a few days later. 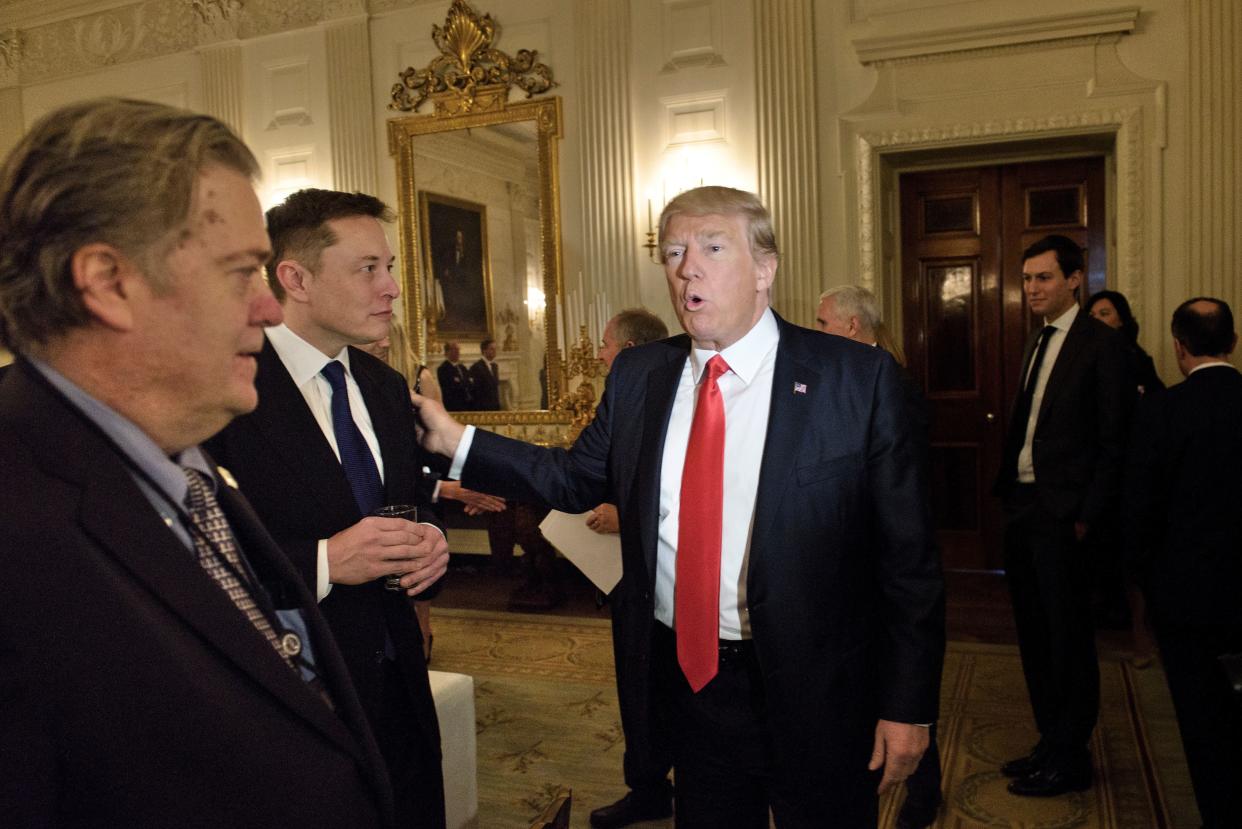 But by June, Musk cut many of his ties after Trump pulled the U.S. from the Paris climate deal. That led to a few years where Musk mused about being a socialist and seemed to endorse high taxes in addition to his tweeted support of Andrew Yang.

Things appeared to shift again during the COVID-19 pandemic as Musk became an increasingly outspoken critic of pandemic lockdowns. He publicly thanked Trump for saying that a Tesla factory should re-open, and he moved himself and Tesla to Texas in 2021.

It was also that year that Musk took to sending juvenile — and often incredibly crude — tweets to mock Democratic politicians from President Biden and his family to Bernie Sanders and Elizabeth Warren. The barrage continued earlier this week with a much-criticized tweet attacking Biden’s son, Hunter.

Musk has also been critical of$ Biden on policy as the president has touted a range of companies for their green efforts but rarely mentions Tesla.

It has now been over 20 months since the FEC last recorded a donation from Musk to a Democrat and, for now at least, Musk says he is leaning towards supporting Ron DeSantis in 2024.

Ben Werschkul is a writer and producer for Yahoo Finance in Washington, DC.