Follow
Home » World News » The pound bounces back: Sterling recovers from its losses

The pound bounces back: Sterling recovers from its losses as it hits a one-week high of $1.222 early in Asian trading – as Liz Truss gets set to meet fiscal watchdog

The pound fought back on the global currency markets today after it was pummelled to an all-time low against the US dollar.

The pound rose as much as 0.8 per cent against the dollar to $1.222 this morning in Asia, putting it in touching distance of where it was before Chancellor Kwasi Kwarteng delivered last week’s controversial mini-Budget.

In an effort to reassure financial markets, Liz Truss and Mr Kwarteng are holding crunch talks today with Britain’s spending watchdog, the Office for Budget Responsibility.

Ms Truss has vowed to push ahead with the growth agenda despite rising anxiety on Tory benches – especially after a shock YouGov poll last night showed Labour with a 33-point lead. 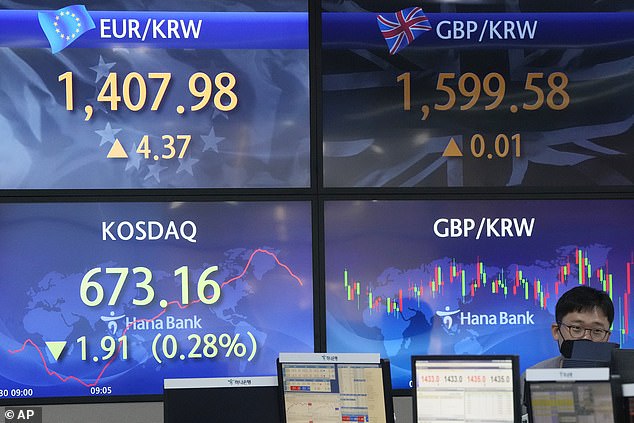 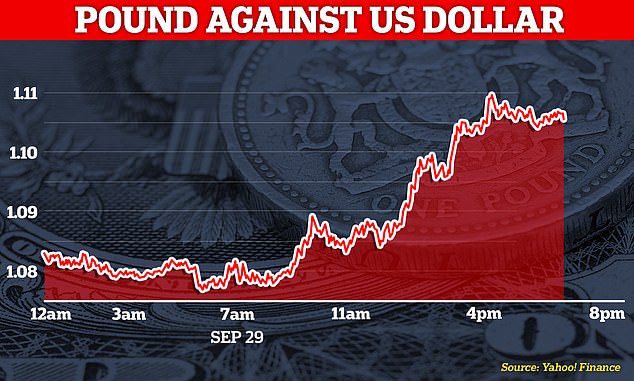 Like other currencies around the world, sterling has been crushed by the dollar this year as the US Federal Reserve acts to tame sky-high inflation through higher interest rates.

The dollar has also benefited from its status as a safe asset in times of economic strife.

But the pound took an aggressive lurch downwards in the wake of the mini-Budget as investors fretted over £45bn of unfunded tax cuts and a cap on energy bills that could cost £100bn.

The Bank of England also faced criticism for acting too slowly and meekly to combat inflation, which this summer topped 10pc for the first time in four decades.

The currency chaos spread to the bond markets, forcing the Bank to intervene on Wednesday with a pledge to buy long-dated UK government debt to restore order.

In a speech to business leaders in London last night, Huw Pill, the Bank of England’s chief economist, said that there would be a ‘significant’ response to recent events when the rate-setting Monetary Policy Committee next meets in early November.

The intervention in bond markets and prospect of further rate hikes lifted the pound.

Brian Daingerfield, head of G10 FX strategy at NatWest Markets in Connecticut, said: ‘The Bank of England took a pretty decisive step to stabilise markets. And that is being taken positively by the currency market.’

But with inflation rampant and global interest rates rising, government borrowing costs in the form of bond yields rose again in the UK, US and Europe.

Neil Wilson, analyst at Markets.com, said: ‘I have rarely seen sentiment so bad. ‘We’re doomed’ seems to be the prevailing mood.

‘We’ve not seen bond markets in such a state for years. Stocks are hovering around two-year lows and the dollar moves serenely on, crushing everything in its path.’

Despite chaos in financial markets, allies of Ms Truss have been urging the premier to stick to her guns – but insisting that she and Mr Kwarteng must improve the way they communicate their plans to voters and markets.

The OBR has confirmed that it offered to provide preliminary forecasts in time for the Budget a week ago, but was rebuffed.

The Chancellor’s tax cuts and energy bills bailout raised alarm that the UK’s borrowing could spiral out of control, but it now appears ministers intend to slash spending.

Benefits might not be uprated in line with rampant inflation as had been expected.

In a round of interviews this morning, City minister Andrew Griffith told Sky News: ‘It seems to me a very good idea that the Prime Minister and Chancellor are sitting down with the independent OBR – just like the independent Bank of England, they have got a really important role to play.

‘We all want the forecasts to be as quick as they can, but also as a former finance director I also know you want them to have the right level of detail.’

Asked about reports the OBR could have carried out a forecast in time for the mini-budget, Mr Griffith said: ‘That forecast wouldn’t have had the growth measures in that plan. They were being finalised in the hours before the Chancellor stood up.’