Follow
Home » World News » The real Doc Martin? I'd never be that rude to MY patients says GP

The real Doc Martin? I'd never be that rude to MY patients says GP

He’s as close as it gets to being the ‘real’ Doc Martin, ministering to residents of the picturesque Cornish fishing village where the hit ITV show is filmed.

But as the comedy-drama begins its final series this week, Port Isaac GP Dean Marshall says that Martin Clunes’ temperamental medic would never pass muster in the real NHS.

‘Any GP who spoke to patients like Doc Martin wouldn’t last long – certainly not 18 years,’ he said. ‘He is grumpy and curmudgeonly and while I’m probably guilty of being curmudgeonly occasionally, I hope never to my patients.’

But he accepts that comparisons to the fictional doctor are inevitable. ‘I haven’t watched much of the show because, like most doctors, I find medical dramas something of a busman’s holiday,’ he said. ‘But I’ve seen enough to realise that if you’re going to be a male GP in Port Isaac you’re going to hear a few jokes about being the real Doc Martin.’

However, Dr Marshall – who at 58 is just two years younger than Clunes – says the show does get some things right.

‘The plot has acknowledged Doc Martin’s failings. In one episode he is told he might have to go on a course to improve his people skills. That happens in real life. I investigate complaints against doctors for the General Medical Council and they sometimes get sent on communications courses to address their relationship with patients.’ 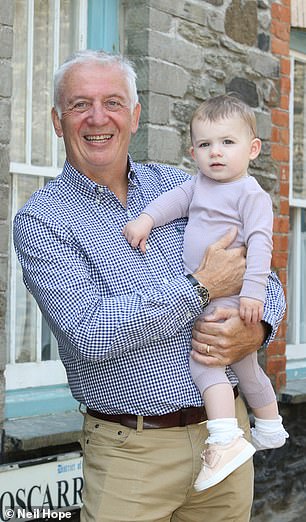 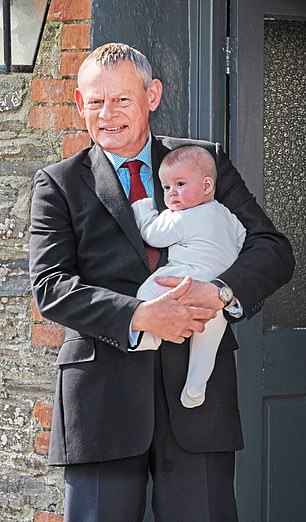 Port Isaac GP Dean Marshall (pictured left with a young visitor to his Cornwall surgery) said patients often joke about him being the real Doc Martin. But he said that Martin Clunes’ temperamental medic (pictured right with his new TV daughter) would never pass muster in the real NHS

And, like his fictional counterpart, Dr Marshall says: ‘Many of my patients are also my friends. In many ways it is like harking back to a different era. Patients are incredibly pleasant and respectful towards us as doctors and see us as part of their community.’

But he says the programme is unrealistic in showing patients simply popping by the surgery. ‘You can’t get a walk-in appointment. That just isn’t equitable.

‘People who are retired or unemployed might be able to queue and wait but if you’re working, or picking up the kids from school, you haven’t the time for that.’

And while Clunes’ character Martin Ellingham has a phobia of blood, Dr Marshall says he’s not similarly afflicted. ‘Heights are my problem – I don’t have a fear of blood. Although, as a medical student, the first time I saw a lot of blood it was quite a shock,’ he says.

Doc Martin arrived in the fictional village of Portwenn 18 years ago from London – and Dr Marshall also came from a big city, Edinburgh. ‘Cornwall has hidden deprivation but overall it’s a different role,’ he said. ‘Our practice covers 104 square miles, it’s very rural and we have an elderly population.’

In the Daily Mail’s Weekend magazine yesterday, Clunes said the show had come to a natural conclusion. ‘I think we’ve sort of done everything,’ he said. ‘It’d be great to carry on but I don’t think we could keep it as good.

‘At the end of series nine we thought we had one more series left in us just to keep it fresh. Ten seemed the right time to end it, and we were fortunate enough to be offered a Christmas special too, so that allows us to complete the series in a really nice way.’

He added: ‘Filming scenes in which the Doc and his wife Louisa are packing up the house and preparing to go back to London, and seeing those boxes and the bare set, it was quite moving.’

The final series of Doc Martin starts at 9pm on Wednesday on ITV.