Images of Kate, Princess of Wales beside Meghan, Duchess of Sussex, at the funeral for the Queen are now firmly lodged in history along with the 1952 photographs of the heavily veiled former monarch, the Queen Mother and Queen Mary mourning King George VI.

Both solemn photographs show the elegance of expressing respect through restraint and by embracing tradition. 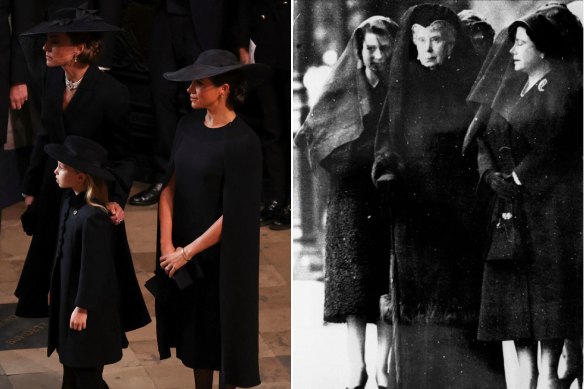 With Kate wearing a coat from Alexander McQueen, the label responsible for her wedding dress, and Meghan in a cape dress from Stella McCartney, who designed the dress for her wedding reception, the women elegantly acknowledged their path into the pages of history.

Kate’s delicately veiled hat by Irish milliner Philip Treacy and Meghan’s tilted Stephen Jones’ creation were contemporary adaptations of the expressions of mourning by their formidable forebears in 1952.

The simple silhouettes of Kate and Meghan’s outfits provided backdrops for the jewellery, which spoke of personal connections to the Queen. Meghan’s diamond and pearl earrings, a gift from the Queen worn on their only official engagement together in 2018, were a gentle whisper compared to the loud four-strand pearl and diamond choker worn by Kate.

Commissioned from the jewellers Garrard by the Queen in the 1970s using pearls gifted by the Japanese government, the choker was worn by Kate to the Queen and Prince Philip’s diamond wedding anniversary as well as the Duke of Edinburgh’s funeral. Another layer of symbolism was added by their presence on the neck of her predecessor as Princess of Wales, Diana, at a 1982 banquet for Queen Beatrix of the Netherlands. 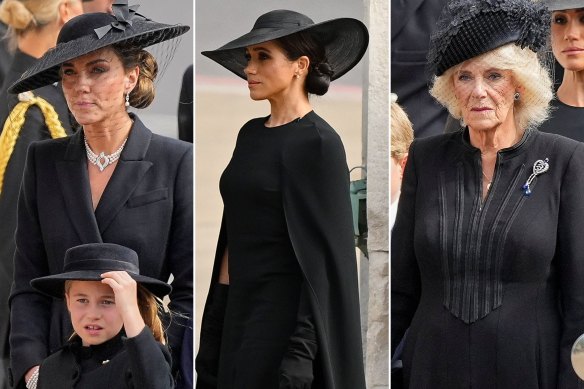 Kate, Princess of Wales with Princess Charlotte, Meghan, Duchess of Sussex and Camilla, the Queen Consort all express grief with style restraint and priceless jewels.Credit:AP, Getty

Pearls, part of the late Queen’s uniform, have been traditional mourning accessories since Queen Victoria’s husband Prince Albert died when she was 42 in 1861. Victoria wore mourning attire for the rest of her life, preferring pearls for their purity and lack of showiness compared to other gemstones.

Camilla, the Queen Consort, not usually a style setter, broke with tradition by wearing a diamond and sapphire brooch. Rather than an act of bejewelled rebellion, the heart-shaped Hesse Diamond Jubilee Brooch was worn by Camilla during the Queen’s Diamond Jubilee celebrations.

The brooch was a gift to Queen Victoria from her grandchildren, and was displayed at the Imperial Institute in London in 1897 before disappearing into the family collection, then revived by Camilla more than a century later. 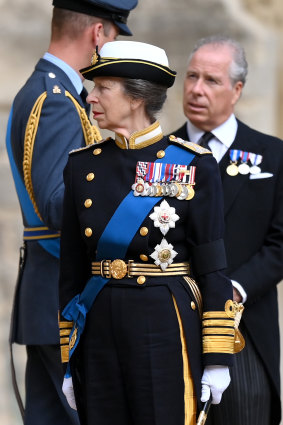 Princess Anne in Royal Navy ceremonial uniform at the funeral of the Queen.Credit:Getty

Princess Anne escaped the dilemma of finding the appropriate brooch and hat by taking the medal approach, joining her brothers King Charles and Edward, Earl of Wessex, along with William, Prince of Wales in military uniform.

Princes Andrew and Harry were prevented from wearing military attire, having retired from positions as working royals for vastly different reasons.

While Anne has not served in the military, she holds a number of honours and titles and dressed in the Royal Navy’s full ceremonial uniform in the rank of Admiral. The Princess Royal’s full-size medals include the Queen’s Service Order, Coronation Medal, the Silver, Gold, Diamond and Platinum Jubilee medals, Long Service and Good Conduct Medal (Royal Navy), Canadian Forces Decoration, Order of St John Service Medal and New Zealand 1990 Medal.

While Anne’s attire commanded respect, along with the jewels of Kate, Camilla and Meghan, it was a simple horseshoe-shaped pin worn by Princess Charlotte that spoke simply to the future. A gift from the Queen, the young princess’s brooch shows that jewellery will continue to express the feelings of the royals for years to come.