The top moments from Harry's interview with Stephen Colbert

Toasting his new life in America, showing off the necklace that William ‘broke’ and fact-checking The Crown: The top moments from Harry’s interview with Stephen Colbert

Late Show host Stephen Colbert asked Harry about the coverage of him by the ‘vicious’ British media in recent years, including quotes from anonymous Buckingham Palace sources.

The host asked Harry if he thought there was ‘an active campaign by the rest of your family and by the royal house to undermine this book and you as you support it?’

Harry replied ‘of course’ and agreed with Colbert that the press were being ‘aided and abetted’ by the Royal Family to attack him.

The claim comes after Harry insisted in his new book that royals, including Queen Consort Camilla, had been briefing and leaking to the press.

The duke now insists he is telling ‘the other side of the story’ with his new book in response to what he claims are attacks on him by members of his family. 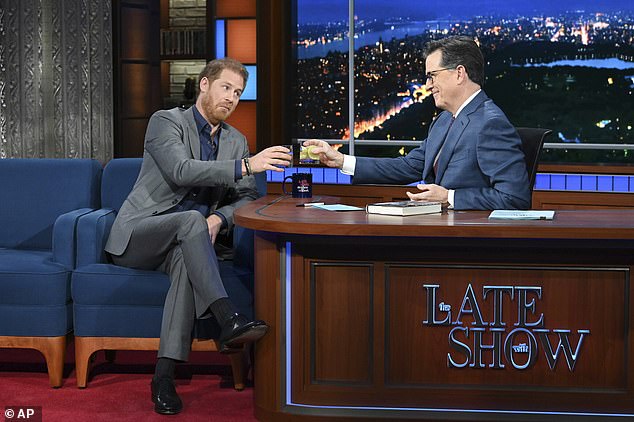 Prince Harry revealed the story behind his explosive new book and claimed the Royal Family were trying to ‘undermine’ him and Meghan as he sipped tequila with Stephen Colbert on the Late Show, and joked about the ‘spare’ chair next to him 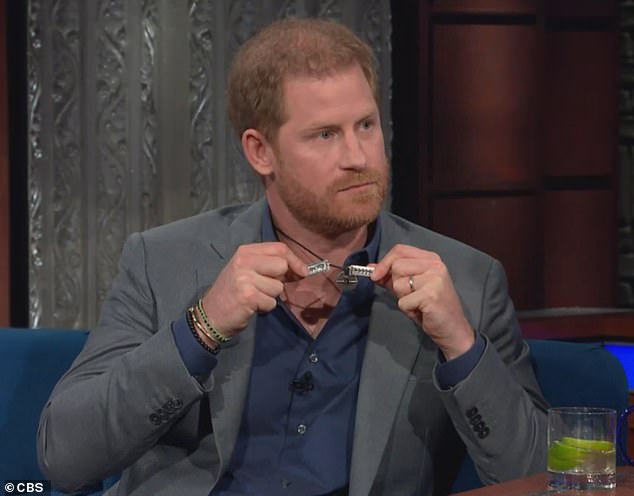 Harry showed off the necklace he says was broken in a fight with his brother William, which has a cardiogram of his children’s heartbeats attached to it

2) Harry denies ‘boasting’ about killing members of the Taliban

The prince has come under fire in recent days over his revelation in his book, Spare, that he killed 25 members of the Taliban while serving as a helicopter pilot in Afghanistan.

Harry rejected claims he had been ‘boasting’ about the killings, after former soldiers criticised the way he had revealed the information. 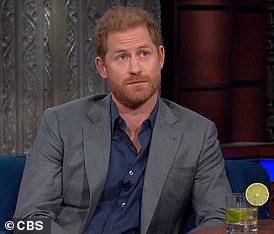 Speaking about the media, Harry said: ‘By far the most dangerous lie that they have told is that I somehow boasted about the number of people that I killed in Afghanistan.’

He argued that the section had been taken out of context, adding: ‘My words are not dangerous, but the spin of my words is very dangerous.’

Harry also claimed that he wanted to speak about the killings following his work with veterans, adding that he hoped to ‘reduce the number of suicides.’

3) If Diana was still alive, things would be different

Harry was also asked about what things would be like if Princess Diana were still alive.

He said ‘we wouldn’t have got to this moment’ if she had been around during his feud with the rest of the Royal Family over the past few years.

The prince added that although it was impossible to know what things would be like, he said ‘there is no way that the distance between my brother and I would be the same.’

He also said that he had ‘felt the presence of his mother’, adding that ‘I’ve felt her more in the last two years than I have in the last 30.’

Harry also drew parallels between himself and Diana, noting that he was the same age as she was when she died, 36, when he chose to step away from the Royal Family.

Colbert also asked Harry about his fight with Prince William that made headlines when he claimed his brother pushed him over and broke his necklace. 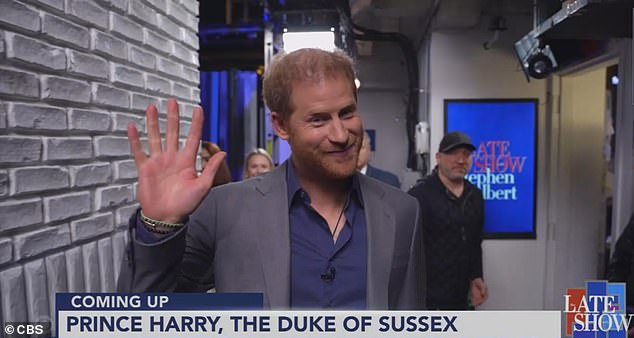 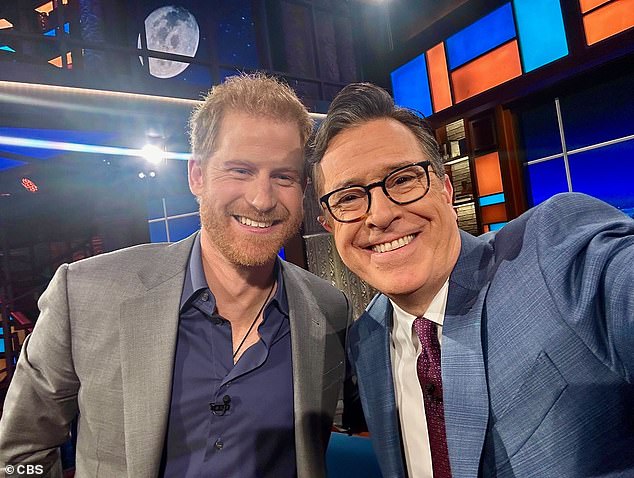 The duke posed for a backstage selfie with Colbert, which the late night host shared on his Twitter account ahead of the interview’s broadcast

Harry revealed that he still had the necklace which was broken during the fraternal scuffle and was wearing it during the 40 minute-long interview on the Late Show.

The prince claimed in his book that William pushed him over onto a dog bowl which smashed, breaking the prized jewelry.

He said that the repaired necklace has tokens of his children’s’ heartbeats in the form of a cardiogram given to him by Meghan and a pendant made by a friend in Botswana.

5) Harry talks about the Spencer gene being strong

Showing Harry a family photo of him with Meghan and their children Archie and Lilibet, Colbert asked Harry if he could see any family resemblance from his grandmother the Queen or his mother Diana.

Harry replied: ‘Definitely my Mum – the ginger gene is a strong one.’

He added: ‘The Spencer gene is very, very strong. I actually genuinely thought at the beginning of my relationship, should this go the distance and we have kids then there’s no way the ginger gene would stand up to my wife’s genes but I was wrong.

6) Harry admits he watches The Crown and ‘fact checks’ it

The prince also revealed that he had watched The Crown TV show, a drama which portrays the reign of Queen Elizabeth II and has been criticised for its historical inaccuracies.

Harry said he had seen ‘the older stuff and the more recent stuff’ of the series.

Colbert asked him ‘do you fact-check it while you watch it?’

Harry jokingly mimed taking down notes before replying: ‘Yes, I do actually.’

He then pointed to his book and said: ‘Which by the way, another reason why it’s so important that history has a price.’

The Duke of Sussex laughed as he played to the audience on a number of occasions during the interview, including offering them all a drink 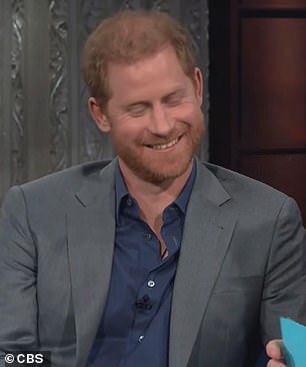 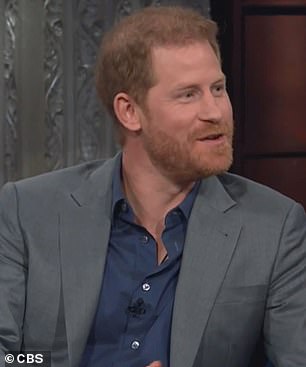 7) Harry on living in America

Harry claimed he and Meghan were forced to ‘flee’ Britain in 2020 after the stepped back from royal duties and moved to Canada, and then the US.

The duke claimed his wife received ‘abuse and harassment’, especially in the 12 months after they left the UK.

He said they had ‘created a fantastic life in California’ after the couple moved to the exclusive town of Montecito.

He told the audience the west-coast state was ‘beautiful, adding that ‘America is a great place to live’ which was greeted with cheers from the audience.

8) Harry jokes about his ‘todger’ getting frostbite

Host Colbert asked Harry about his trip to the North Pole, which caused him to get frostbite ‘on a delicate part of your anatomy’.

Colbert jokingly asked him: ‘Can you explain how it is that the royal standard got frostnip?’, adding ‘at what point did you realise there was a crisis at the South Pole?’

The prince described the incident in his memoir, when his exposure to the arctic cold caused him to get frostnip on his ‘todger’, and only realised the damage after he returned home.

He said that although he tried to prepare for the -35C climate, he failed to pack what he called a “c*** cushion”, causing him discomfort after being exposed to the freezing temperatures.

Colbert responded: ‘No one could ever have explained to me as a child that one day the Duke of Sussex would say the words “c*** cushion” to me and it would all make sense.’ 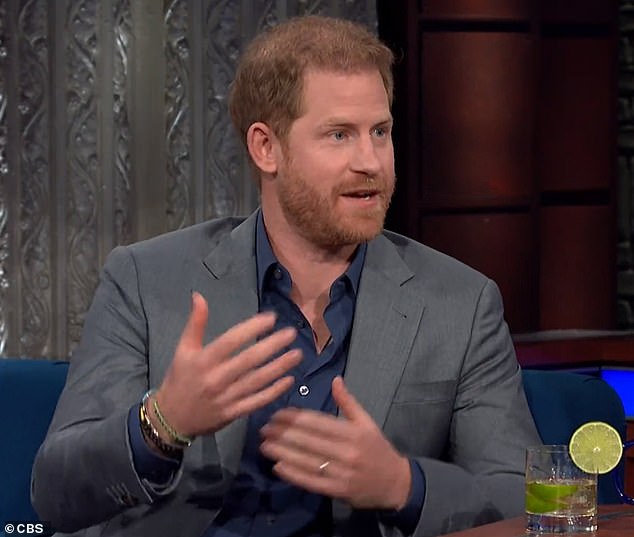 The Duke of Sussex also revealed he sees his mother, Diana, in his children and fact-checks The Crown as he watches it

Throughout the interview, Harry drank a tequila cocktail given to him by Colbert at the start of the show.

The host offered him more tequila throughout the show, including after he asked him about his ‘todger’ being frostbitten in the arctic.

Harry also toasted his home in the US with Colbert and took part in some mock meditation with the chat show host.

10) Harry jokes about the ‘spare’ chair

Prince Harry kicked off his interview on The Late Show with a reference to his explosive new memoir by calling the other chair in the studio the ‘spare’.

After being introduced by Colbert, Harry was loudly cheered on by the audience in the studio.

He then pointed to the empty chair next to him asking ‘Is this the spare’ – referring to the title of his newly released book.