The US ‘lost’ the Afghanistan war, Milley tells inquiry

Washington: US President Joe Biden’s top military adviser has told an inquiry the Afghanistan war was lost through a series of pivotal decisions spanning the last four presidential administrations, offering his latest defence of the commander-in-chief whose order to end the 20-year campaign and the treacherous evacuation that followed have come under withering scrutiny on Capitol Hill.

“It wasn’t lost in the last 20 days or even 20 months. There’s a cumulative effect to a series of strategic decisions that go way back,” Chairman of the Joint Chiefs of Staff General Mark Milley told the House Armed Services Committee during a rancorous hearing that further underscored the deep partisan split following last month’s deadly exit from Kabul. 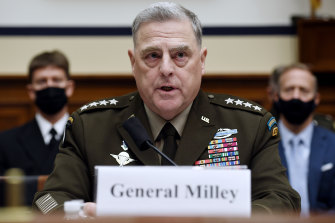 Mark Milley, chairman of the joint chiefs of staff, speaks during a House Armed Services Committee hearing in Washington on Wednesday.Credit:Bloomberg

“Whenever you get some phenomenon like a war that is lost – and it has been, in the sense of we accomplished our strategic task of protecting America against al-Qaeda, but certainly the end state is a whole lot different than what we wanted,” Milley added. “So whenever a phenomenon like that happens, there’s an awful lot of causal factors. And we’re going to have to figure that out. A lot of lessons learned here.”

Milley’s testimony came a day after he and another key figure in the American exit from Afghanistan, US Central Command commander General Kenneth McKenzie, told a Senate panel that the war had been a “strategic failure” but that Biden was within his right to dismiss their counsel that a complete military withdrawal would hasten the Taliban’s takeover.

Throughout Wednesday’s hearing, Republicans and Democrats sparred over the question of whether America’s leaders – particularly Biden – were honest with the public about their projections for Afghanistan. At one point, the session devolved into an argument over who was to blame for the war’s messy end game – during which 13 US service members were killed in a suicide strike outside the Kabul airport and hundreds of US citizens were left behind.

“While we’re ripping apart these three gentlemen here I want to remind everybody that the decision the president made was to stop fighting a war that after 20 years it was proven we could not win. There was no easy way to do that,” the committee’s chairman, Democrat Adam Smith, told his colleagues, accusing them of “partisan political opportunism.”

Several Republicans accused Biden of lying to the public about the advice military leaders provided him concerning the withdrawal.

Milley and McKenzie have told lawmakers they had advised both Biden and his predecessor, president Donald Trump, to keep at least 2500 troops in Afghanistan, emphasising their belief that a reduction below that number would precipitate the eventual collapse of Afghanistan’s government and military.

At the outset of Wednesday’s session, Alabama Mike Rogers, the panel’s top Republican, accused the White House of allowing the State Department to determine the US military posture in Afghanistan.

“We have to admit this was the State Department and the White House that cause this catastrophe, not the Defence Department,” Rogers argued, claiming the withdrawal “will go down in history as one of the greatest failures of American leadership.”

As they did in the Senate a day prior, the military leaders defended Biden’s right as the civilian commander in chief to disagree with their recommendations. Defence Secretary Lloyd Austin told lawmakers he did “support the president’s decision to end the war in Afghanistan” and that he “did not support staying there forever.”

Yet all three acknowledged that the Afghan government’s collapse – and that of the Afghan security forces – occurred much faster than the Pentagon had predicted. “I did not see it coming as fast as it did,” McKenzie said. “I thought it would be a matter of into the fall or into the winter. I did not see it happening in 11 days in August.”

Lawmakers repeatedly referenced an August interview Biden gave to ABC News’ George Stephanopoulos, in which the president said his military advisers were “split” over whether to keep troops in Afghanistan – and then said no military advisers told him that he could “just keep 2500 troops” in the country.

“Either the president lied to the American people or he legitimately cannot remember the counsel of his top military advisers,” Republican Mike Johnson, said, reading from a transcript of Biden’s interview. “Which is it?”

The military leaders refused to detail the advice they gave the president, and Austin told Johnson that he considered his question “inappropriate.”

Democrats on the committee took umbrage at such criticism, arguing Biden never said that military leaders had not recommended leaving some US troops on the ground. “What he said was, none of them said that we could do it in a stable, peaceful environment,” Smith said. “And that is the key point.”

Leaving US troops in Afghanistan “would have been putting American lives at risk for a mission that we had to know was not achievable,” Smith said. “The president made the right call on that.”

Milley told senators Tuesday there was “near certainty” of additional attacks on US troops and “significant casualties” had the military tried to stay beyond the August 31 deadline. Remaining into September, the general said, would have required committing up to 25,000 additional personnel to reopen abandoned bases and retake Kabul, which by that time was being patrolled by an estimated 6000 Taliban fighters.

Still uncertain is the future of US counterterrorism operations in Afghanistan. Austin, Milley and McKenzie acknowledged that so-called “over-the-horizon” capabilities are not as reliable as on-the-ground intelligence.

The conditions created by Taliban rule will “more likely than not” allow for the reemergence of al-Qaeda and the Islamic State’s affiliate in Afghanistan, Milley said, noting the Pentagon would watch for signs of that happening. But “it will take time to develop a true intel picture,” Austin noted.

Aggressive anti-masker floored by a single punch in restaurant

Gloating EU politician says Brexit has been a 'catastrophe' for UK

Alec Baldwin one of four people to blame for Halyna Hutchins shooting as actor should have checked gun, says crew member