Follow
Home » World News » ‘There is no time limit’: Jack de Belin jury could keep deliberating into next week

The jury in the trial of footballers Jack de Belin and Callan Sinclair have signalled they may continue deliberating into next week in order to reach a unanimous verdict on the aggravated sexual assault charges against the men.

NSW District Court Judge Nicole Noman received a note from the jury shortly before 4pm, about the time they were due to go home, asking if they were able to continue if they couldn’t reach a decision by the end of the week “as intended”. 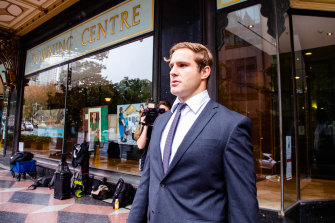 Judge Noman told the jury sitting at the Downing Centre court complex in Sydney that, while she had asked them at the start of the trial to make sure they were available until May 7, they were able to take as long as they believed necessary to reach their verdicts.

“There is no time limit on it,” she told the jury, who will on Friday enter their fifth day of deliberations. “You’re allowed to take, and you should take, as long as you require.”

Mr de Belin, an NRL player with St George Illawarra, and Mr Sinclair, of the Shellharbour Sharks, have pleaded not guilty to five counts each of aggravated sexual assault over the alleged attack on the woman, then aged 19, at a North Wollongong unit in the early hours of December 9, 2018.

The woman claimed that, despite her refusals, Mr de Belin removed her clothes and forced himself on top of her before Mr Sinclair joined in.

The pair met her several hours earlier at the Mr Crown nightclub in Wollongong during a Santa-themed pub crawl.

Crown prosecutor David Scully, in his closing arguments on Thursday, said Mr de Belin “hoped” and “expected” sex with the woman would occur, and “when the complainant didn’t want it, he didn’t take no for an answer”.

Mr de Belin’s barrister David Campbell, SC, said the woman was seen on CCTV footage “laughing her head off” and “enjoying herself” as she walked along a Wollongong street with the pair after the alleged incident.

is, Jack, limit, No, there, time
You may also like: