Follow
Home » World News » ‘There will be a significant shift’: Travel nightmares to end as Andrews relents on borders

The New Year's travel nightmare will soon be over for thousands of Victorians after Premier Daniel Andrews relented on border restrictions, lifting a travel block on Brisbane and flagging the state would reopen to most of Sydney within the next "couple of days".

At least 5000 Victorians stranded in greater Brisbane for over a week can come home immediately after Mr Andrews said his public health team was satisfied by Queensland recording no new cases of community transmission for 14 days and would downgrade Brisbane to an “orange zone” from 6pm Saturday. 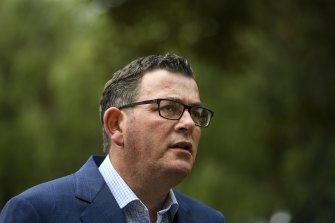 Premier Daniel Andrews announced Victorians in Brisbane will be allowed to return home after more than a week of travel blocks.Credit:Penny Stephens

Sydney will be next, the Premier said, with travel blocks set to be whittled down to only a selection of local government areas in western Sydney by Monday, allowing thousands more Victorians to return home and reviving what is normally one of the world's busiest flight routes.

“There will be a significant shift in the next couple of days,” Mr Andrews said on Saturday.

Pressure on the Premier to lift travel restrictions on stranded Victorians grew this week following the first arrivals of tennis players and he hit back on Saturday, saying decisions to impose and ease travel restrictions were made purely on health advice.

“These are not easy decisions … [but] I’m not about to cherry pick and only follow the advice that’s convenient from a political point of view,” Mr Andrews said.

“That is not leadership. That is something very different. And despite calls and commentary and criticism, that’s not how we operate. We are doing what must be done to keep our state safe.”

Arrivals into Victoria need to get tested for COVID-19 within three days of entering the state, an increase on the 24-hour limit over New Year’s that wreaked havoc at busy testing sites. They will only need to isolate until they get a negative result.

"Once they get a negative test they will then be free to go about their business," Mr Andrews said. 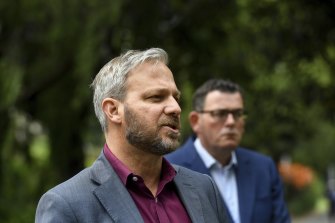 Chief Health Officer Brett Sutton said he would comb through data on Sydney’s outbreak on Sunday and Monday.Credit:Penny Stephens

Chief Health Officer Brett Sutton said similarly eased conditions will soon be applied to most of greater Sydney, currently a red zone, including the northern beaches where the state’s outbreak began shortly before Christmas.

NSW recorded one new infection on Saturday following two days of zero cases and Mr Andrews said health officials “just want another day or two to be able to be absolutely firm" on shifting most of Sydney to an orange zone.

Jenny Curthoys is flying to Melbourne on Monday after spending an extra week in Brisbane worrying about her ill husband, Graeme, who is waiting for her back home in Swan Hill. They had planned for 10 days apart, but not a day longer.

Ms Curthoys, in Brisbane to visit her sister for the first time since COVID-19 restrictions had allowed, endured the city's three-day lockdown and booked a flight home for Tuesday last week, the day after it lifted.

"I assumed once everything had been cleared [by Queensland Health] then our friend Dan would let us home. But no. This is when I went into a panic," she said.

Ms Curthoys said she applied to the Victorian government on three separate occasions for a travel exemption, but had not received an answer.

Trying to guess the thinking of Victorian authorities, Ms Curthoys booked another flight home for Thursday.

When that came and went, she moved the flight to Saturday January 16 and was again forced to cancel.

"Then you start getting news that they're letting the tennis players in and that's when you get really frustrated," she said. "[Friday] night I was in tears, just out of sheer frustration. I just didn't want to be a Victorian. It was 'where can I go, how can I escape' because it seemed no one really cared, except my sister.

"I'm so relieved now. I have my flight home and now I can enjoy this last day with my sister."

Opposition spokesman David Davis kept the political heat on the Premier on Saturday, claiming the Brisbane decision was in response to criticism.

“They have been under huge pressure because they made a silly set of decisions around these borders, decisions that had not been properly scoped and thought through," he said.

a, Be, S, significant, there, will
You may also like:

Schools reopening: What are my rights if I don’t want to send my child back today, March 8?

NYPD cop knelt on teen’s back, fired gun — but is still on force: court docs

No Windsors, just losers as Harry and Meghan open fire on family firm